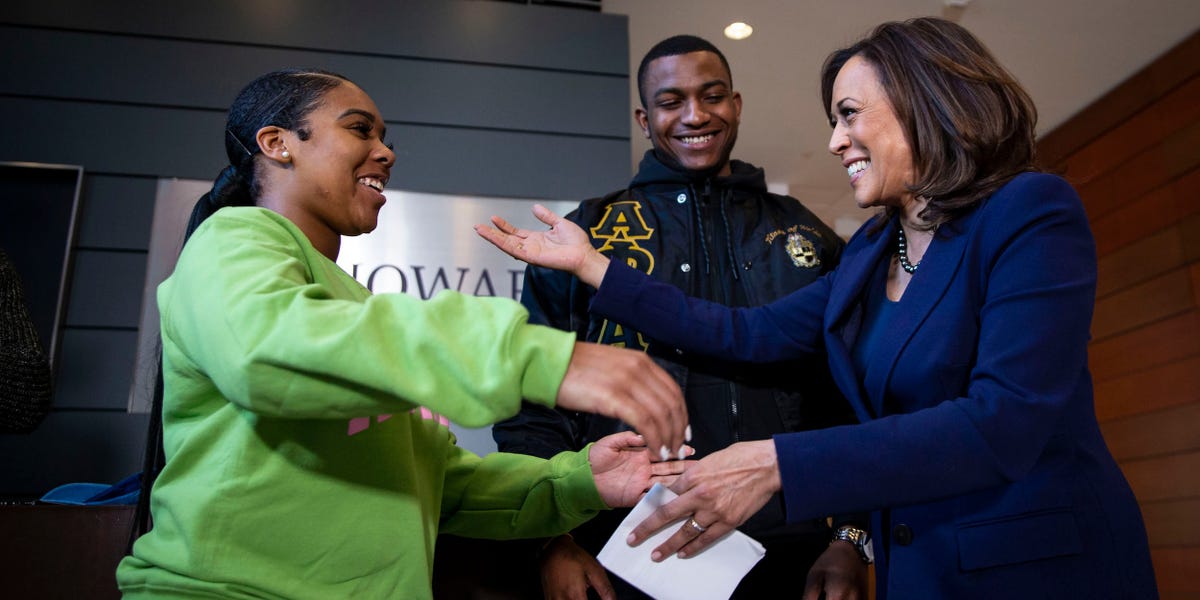 Gender at Work: Kamala Harris would be the first woman of color VP

Sign up here to receive our newsletter Gender at Work in your inbox twice a month.

Harris is a US senator from California who ran for president as a Democrat earlier in this cycle. Before she was elected to the Senate, she was the attorney general of California and the San Francisco district attorney. Harris’ parents immigrated to the US from Jamaica and India, and Harris graduated from a historically Black university.

Harris would increase the representation of women in major US leadership roles. Just 26 of 100 US senators today are women. In corporate America, 4% of C-suite executives are women of color.

If Harris and Biden win, it would be a huge milestone for women across the US, and in particular for BIPOC women. (BIPOC stands for “Black, Indigenous, and people of color.”) Harris’ name on the ballot — independent of her specific political platform — suggests that BIPOC women’s career ambitions are within reach.

Meanwhile, Biden, who is 77, has suggested that he may not run for a second term if elected. An adviser to Biden’s campaign told Politico that Biden was thinking: “I want to find a running mate I can turn things over to after four years, but if that’s not possible or doesn’t happen, then I’ll run for reelection.”

There’s a lot of pressure on Harris to succeed.

This is a twice-monthly newsletter that takes an expansive look at how your gender identity informs your career. Last week we covered Biden’s plan to invest $775 billion in caregiving programs. This week we’re talking about the implications of Harris’ spot on the Democratic ticket.

Eighteen states have never sent a woman to the Senate, and only one governor — Michelle Lujan Grisham of New Mexico — is a woman of color.

And while BIPOC women represent about 37% of working-age women, they make up less than 5% of senior-level management positions and less than 1% of CEOs of S&P 500 companies, according to research from the nonprofit organization Catalyst.

So when a woman of color does reach a position of power, the spotlight is on her. Performance is scrutinized in a way it isn’t necessarily for white men.

A 2012 study published in the Journal of Experimental Social Psychology found that Black female leaders may experience “double jeopardy.” When they fail or when their organization does, Black women are judged negatively based on their two “subordinate” identities.

“Given that atypical leaders, in general, are often expected to fail and are frequently evaluated more negatively when they make mistakes,” the authors write, “Black women may have to be exceptionally diligent when managing subpar outcomes.”

And then there’s the “glass cliff.” A sister of the glass ceiling, as our colleague Marguerite Ward reported, the glass cliff describes what happens when women or people of color are promoted to senior leadership during difficult times for an organization and the risk of failure is high. Like, say, a pandemic and recession.

Michelle Ryan at the University of Exeter told Ward that it’s unclear why women and people of color are often given leadership roles during crisis periods. But a consequence can be that people feel their assumptions are validated: Maybe women of color aren’t equipped to be leaders after all.

“We might find that these women don’t last as long in these positions or that they may be highly criticized because there’s a lot going on,” Ryan told Ward. “And that potentially reinforces the stereotype that women [and people of color] aren’t good at leadership.”

As vice president, Harris could face the same challenges that other women of color encounter after ascending to leadership positions. Women are often subject to implicit bias in the business world, or the unconscious assumptions people make about others based on gender, ethnicity, age, or minority status rather than their actual qualifications. And those biases can be heightened when it comes to women of color.

Harris has said those biases no longer faze her.

She told The New Yorker in 2019: “I’m not carefully enough watching — and I probably should — how men are being treated compared to me.”

“I’ve had this experience so many times that I don’t let it distract me,” she said on running for office as a woman of color when most candidates weren’t.

When a reporter asked Harris in January 2019 how she described her racial identity (“You’re an African American woman, but you are also Indian American”), Harris replied, “I describe myself as an American.”

Within a week of her nomination by Biden, Harris fielded false accusations of ineligibility to serve as president because her parents were immigrants; racial slurs from a Virginia mayor likening the California senator to “Aunt Jemima”; and names like “mad woman,” “nasty,” “condescending,” and “angry” from President Donald Trump.

Harris’ experiences of bigoted treatment are, unfortunately, unsurprising. Assertive and successful women are much more likely to be perceived as “bossy” and unlikable than their male counterparts at work, our colleague Weng Cheong reported.

A model for BIPOC women

In spite of the challenges that Harris might encounter, her presence in the White House — and even on the ballot — could fundamentally change the way young women think about leadership.

The New York Times reported on a study from the Girl’s Leadership Institute that found that 48% of Black girls surveyed identified as leaders, the highest among all ethnic groups. The presence of strong role models seemed to be one of the most important factors contributing to their leader aspirations.

“I’m having a Shirley Chisholm moment,” LaTosha Brown, a cofounder of the Black Voters Matter Fund, told The Washington Post, referring to the first Black woman elected to Congress. Regarding Harris, Brown said: “There are so many women — Black women — who were never considered. It’s not just her candidacy, but all that it represents.”

Harris’ election could pave the way for millions of women who strive to lead in the US, whether in the office — or the highest office in the land.

We invite women of color to share your thoughts about Harris’ spot on the ballot. In the meantime, please share this newsletter with friends and colleagues. If this email was forwarded to you, sign up here.

We’re also interested to know: Are there specific leaders or themes we should spotlight in this newsletter? Send suggestions to [email protected] We’re excited to read them.