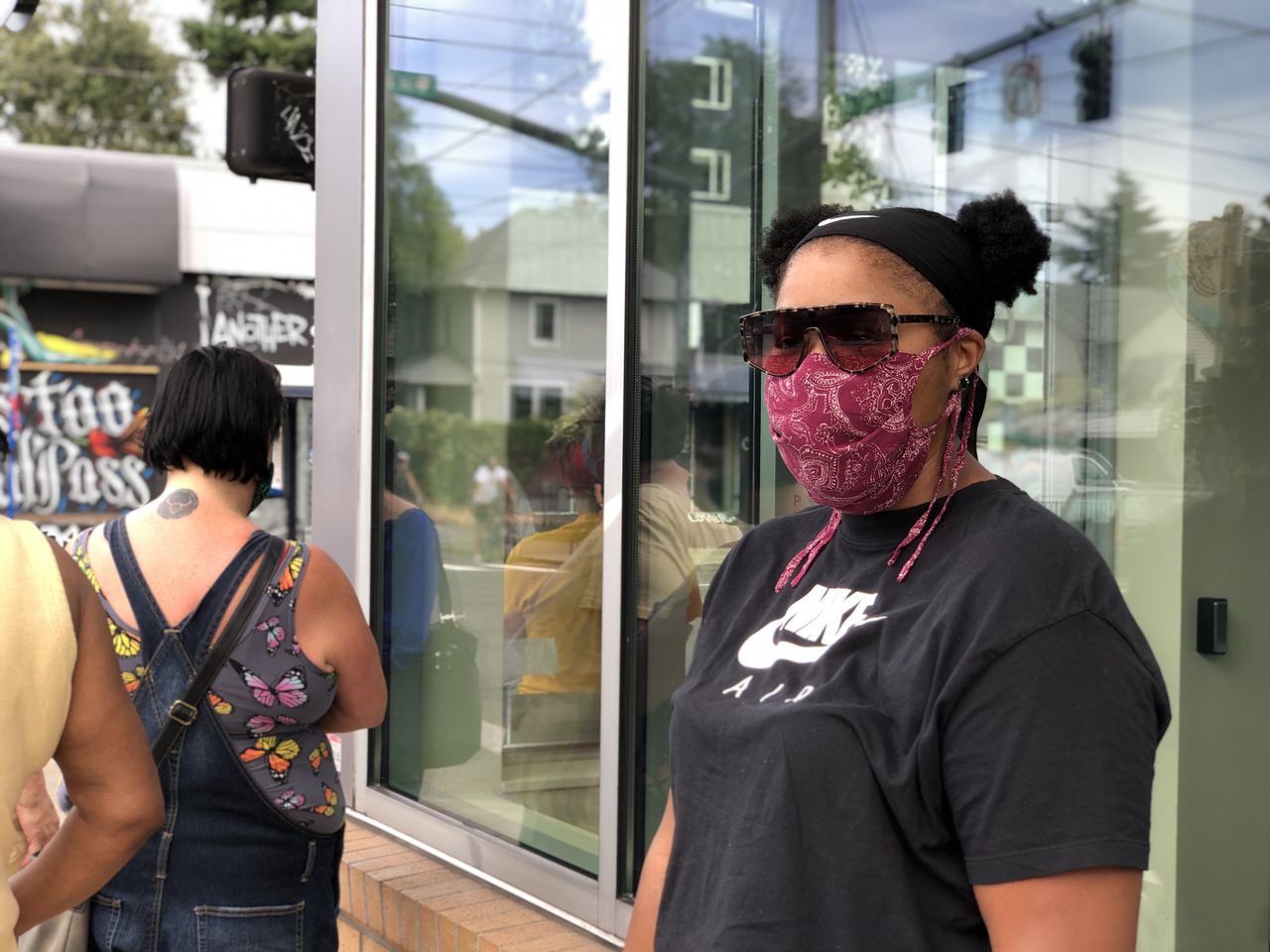 ‘Free money’? Incredulous Oregonians line up around the state for $500 relief checks

It didn’t seem plausible when Stephanie Roberts saw the news on Facebook: banks and credit unions handing out $500 to struggling Oregonians?

“I didn’t think it was real at all,” Roberts said Wednesday afternoon. “But I thought it was worth a try.”

Laid off from her customer service job at a research marketing firm, and with two kids at home, Roberts, 30, headed down to OnPoint Community Credit Union’s Southeast Hawthorne branch – and discovered the money was real. And so were the lines.

After two hours of waiting, Roberts was near the front of the line by midafternoon Wednesday. She said the $500 would help compensate for jobless benefits she has been counting on, but the Northeast Portland resident expects she’ll burn through it right away.

“I’m going to pay my lights and put it towards my rent,” Roberts said.

Thousands of people lined up all over Oregon on Wednesday for one-time, $500 relief payments the state Legislature authorized in July for as many as 70,000 Oregonians who meet the income and hardship qualifications. Wednesday was the first day the money was available and it’s first-come, first served.

“Somebody giving out free money? You know lines gonna be long,” said Nini Carter, 29, who was also skeptical the payments were real until she saw photos of Wednesday’s lines on Snapchat. She was there with a friend, Christina Sanders, and they brought chairs to make the wait in the toasty afternoon sunshine a bit more comfortable.

Similar scenes were reported around the state, albeit sometimes under cloudier skies. Though in some places people suggested applicants grew agitated by the long lines.

Fewer banks serve Oregon’s small communities and in Tillamook one applicant said she was told she would have to wait until August 31 for an appointment to collect the money. She feared the state’s funds would be exhausted by then.

Nobody knows how long the money will last and state legislative leaders wouldn’t venture a guess Wednesday morning. At the end of the day, legislative staff said the state had paid out more than 12,000 of the $500 claims.

“With the tremendous interest in receiving the checks, we are asking people to observe social distancing precautions inside and outside our branches, including mask requirements and staying six feet away from others in line,” the credit union said in a statement.

An hour into her wait, Sanders said she plans to use the $500 to buy groceries and gas – and put the rest away for savings.

Lawmakers used $35 million in federal coronavirus relief money to fund the one-time, $500 payments and unveiled the program Wednesday morning. To prevent fraud, the state is requiring people to show up in person to fill out an application and collect their money. Applications and payments are available at more than 150 financial institutions statewide.

Instructions are posted online at https://emergencychecks.oregon.gov. To qualify for the money, people must be Oregon residents with valid identification who are suffering financial hardship due to the pandemic and who were earning less than the equivalent of $48,000 per year before the coronavirus hit (the state’s average annual wage is about $57,000.)

Oregon’s jobless rate was 10.4% in July, near the peaks the state reached in the worst days of the Great Recession.

Lawmakers created the $500 payout program in hopes of offering relief to tens of thousands of Oregonians who haven’t received their benefits from the state’s faltering jobless claims system. But people don’t actually have to be unemployed to qualify for the $500.

Those who have filed for jobless benefits, though, are only eligible for the $500 if the state is behind in making their benefits payments.

The mood was upbeat outside OnPoint on Wednesday afternoon. Nearly everyone waiting for their $500 was wearing masks and many had their children with them. Some were enjoying popsicles in temperatures that were well into the 80s.

With waits stretching for hours, though, and the line well over a block long and more people arriving every few minutes, it seemed unlikely everyone would get their $500 on Wednesday. And it wasn’t immediately clear what will happen to those people waiting at the end of the day.

Sonja Malone, 48, walked out of OnPoint with $500 in cash a little after 2:30 Wednesday afternoon.

“I have children and bills and my truck needs help,” said Malone, who said she is on Social Security Disability Insurance.

The Southeast Portland resident said the application was simple, straightforward and while she waited more than an hour in line she spent just 10 minutes inside as tellers processed her paperwork and provided her money.

“It was a really short application,” Malone said. “Just be here.”

For more information on the $500 payment program, including the financial institutions making the payments, visit the state’s website for the program at https://emergencychecks.oregon.gov.

2020-08-20
Previous Post: Germany To Test Universal Basic Income By Handing Out Over $1,400 A Month In Experiment
Next Post: Shreyas Shipping to be split in two following DP World deal