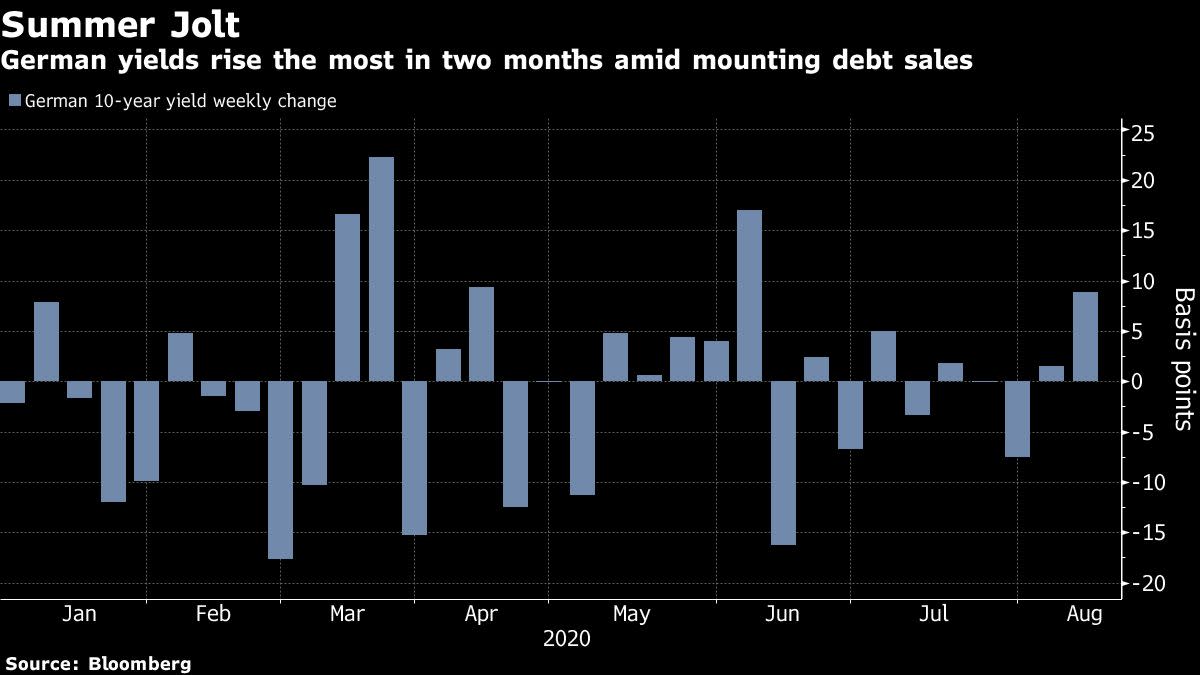 (Bloomberg) — After the biggest weekly rise in German and French yields for two months, bond auctions from both nations totaling 13.5 billion euros ($16bn) are due next week.

France’s offering is its first in mid-August since 2001. It follows just one week after Italy broke with tradition by selling bonds worth 6.75 billion euros in the middle of the month. The auctions come as countries grapple with increased funding needs created by measures to offset the economic impact of the coronavirus.

Such is the rise in France’s requirement — estimated at 138 billion euros by Citigroup Inc. strategists — that it exceeds the value of the ECB’s bond-buying measures by 20 billion euros, according to the same analysis.

The bank’s research also finds that Germany is in an even worse predicament, with its shortfall estimated at 193 billion euros.

Even so, this week’s selloff means strategists at Commerzbank AG, including Christoph Rieger, see current yields as a “buying opportunity” into the August auctions.

France sells three conventional and three inflation-linked notes on Thursday totaling eight billion eurosGermany sells 5.5 billion euros in two conventional bonds in auctions on Tuesday and WednesdayThere are no euro area redemptions or coupons until Sept. 1 when Italy pays around 34 billion euros.The U.K. will hold three regular gilt auctions and one inflation-linked bond sale next week, selling a combined 9.1 billion pounds ($12 billion) and buying back 4.4 billion pounds of debt across three operationsData releases include preliminary manufacturing and services PMI for August for the euro-area, Germany and the U.K as well as France, all on Friday.The schedule is otherwise light in Europe, offering investors few other clues on the state of the region’s economiesU.K. inflation numbers for July are scheduled for Wednesday, while Friday has July retail sales figures and PMI data, as investors seek confirmation of the Bank of England’s relatively optimistic economic outlookThe European Central Bank publishes the account of its July meeting on ThursdayThere are no ECB or BOE policy makers scheduled to speak next weekMoody’s Investors Service reviews France on Friday