We’re more than halfway through the Q2 earnings season for the Silver Miners Index (SIL), and the most recent name to report earnings is Fortuna Silver Mines (FSM). The company had an unusually weak Q2 with gold and silver production down 47% year-over-year due to COVID-19 related shutdowns. However, while this has put a dent in annual earnings per share [EPS] estimates for FY2020, we should see industry-leading earnings growth in FY2021 as Lindero construction is nearly complete. Therefore, the days of disappointing returns relative to peers since 2018 may finally be in the rear-view mirror, with Lindero expected to be a world-class asset based on projected costs. Based on the improving investment thesis here with higher metals prices and Lindero near completion, I believe any pullbacks below $5.15 would be low-risk buying opportunities.

Fortuna Silver released its Q2 results last week and reported quarterly silver production of 1.27 million ounces and quarterly gold production of 7,100 ounces. This much weaker performance translated to a 47% drop in production for both metals year-over-year, with the culprit for the lower production a 54-day shutdown at the company’s San Jose Mine in Mexico related to COVID-19. On a year-to-date basis, gold and silver production were down 36% and 33%, respectively, from the same period last year. Fortunately, the San Jose Mine is since up and running at full capacity. Still, the lower production took a bite out of revenues in Q2, with quarterly revenue slipping from $67.9 million to $44.5 million as Caylloma was the only mine in production. Let’s take a closer look at the results below:

Beginning with the company’s San Jose Mine in Mexico, the government-mandated shutdowns certainly didn’t help operations here, with San Jose offline from April 2nd until May 2nd. As we can see in the table below, silver production came in at ~1.03 million ounces, down from ~ 2.16 million ounces in Q2 2019. We saw mill throughput decrease by more than 40% to 160,151 tonnes during the quarter while grades also slipped considerably. Silver grades in Q2 2020 came in at 220 grams per tonne silver, down from 273 grams per tonne a year ago. The only silver lining was the average realized price for silver was up over 15% year-over-year to $17.28/oz.

Meanwhile, gold production also took a massive hit in the quarter, with gold production coming in at just 6,654 ounces, down from 13,204 ounces in the year-ago period. Like silver production, lower grades and lower throughput were the reason for the decreased production, with gold grades down 15% to 1.42 grams per tonne gold. This led to all-in sustaining costs per silver-equivalent ounce [SEO] of $11.18/oz, despite lower sustaining capital expenditures. While this was a significant increase from the year prior ($9.26/oz), these are still very reasonable costs given the unprecedented challenges Fortuna had in Q2.

Moving over to the Caylloma Mine in Peru, we also saw government-mandated COVID-19 restrictions, but the company was able to have a decent quarter regardless. This is because the mine managed to process stockpiles in the quarter with very reasonable grades. As we can see in the table below, silver production was up in the period, from 230,000 ounces to 244,873 ounces, with higher throughput and higher grades being the reason for the outperformance. During the quarter, the company processed ~134,200 tonnes, up from ~133,500 tonnes in Q2 2019, while silver grades improved by over 10% to 72 grams per tonne gold. However, while production did improve year-over-year, we did see a slight jump in all-in sustaining costs from $13.48/oz to $15.81/oz. Fortunately, this was partially offset by the higher average realized silver price, which increased by a similar amount in the quarter ($16.06/oz vs. $14.89/oz).

If not for the contribution from Caylloma, this would have been a disastrous quarter for Fortuna with almost no metal sales, but the fact that Caylloma was able to operate certainly helped quite a bit. However, it’s worth noting that Fortuna voluntarily suspended operations at Caylloma in June to sanitize and disinfect the mine, and operations did not restart until July 27th. Given that we lost the first month of this quarter due to this voluntary shutdown, we could see softer results in Q3 at the mine. This shouldn’t be a huge issue and won’t likely be noticeable in revenues as San Jose is the much more significant contributor to the company’s production profile.

Finally, taking a look at Lindero in Argentina, the COVID-19 related shutdowns didn’t make things any easier here either. Unfortunately, construction at the project was halted for over a month, adding to an already delayed and over budget schedule. As of quarter-end, the project’s new total costs are estimated at closer to $320 million. The good news is that the construction is finally 97% complete after what’s felt like an eternity, and this is a transformational asset for Fortuna once it’s in production. The 2017 Feasibility Study envisions gold production above 130,000 ounces per year at all-in sustaining costs below $600/oz, with these costs being more than 30% below the industry average. Based on current estimates, the heap irrigation is scheduled to begin at month-end, with the first ore stacked on the leach pad last month. Given the cost over-runs and massive delays, investors shouldn’t hold their breath on the Q1 2021 commercial production estimate, but I would argue that we’re very likely to hit that goal by April at the latest. 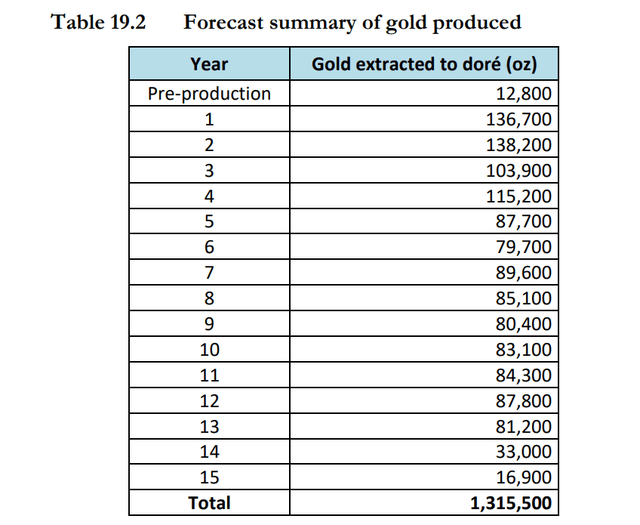 As the above table shows, Lindero should produce over 115,000 ounces for Fortuna based on a late Q1 2020 start date, with 25,00 to 28,000 ounces of gold ore expected to be produced this year from pre-production. Given that Fortuna is currently producing less than 60,000 ounces of gold per year, the extra boost from Lindero should push consolidated gold production well above 180,000 ounces with San Jose firing on all cylinders. This is a significantly improved production profile, and it gives the company a very attractive asset from a margin standpoint, vs. Fortuna’s current operations, which are relatively average vs. peers in terms of costs. Therefore, assuming we can see a smooth ramp-up and Lindero performs as planned with all-in sustaining costs below $575/oz, there is undoubtedly long-term upside for Fortuna. Let’s take a look at Fortuna’s growth metrics below:

As noted earlier, FY2020 earnings per share [EPS] estimates slid considerably due to the government-mandated shutdowns affecting metals sales, with annual EPS expected to come in at $0.10 this year. This is a massive drop from the $0.18 reported in FY2019, but fortunately, it’s not expected to last. If we take a look at FY2021 annual EPS estimates, we can see that they’re currently sitting at $0.76 and are climbing since May, with the massive growth based on higher metals prices and Lindero starting up in Q1. Assuming Fortuna Silver meets these estimates, this would translate to over 600% growth year-over-year in annual EPS in FY2021, one of the sector’s highest growth rates. However, this outstanding growth would also translate to an earnings breakout for the stock, a very bullish development. Generally, the share price typically follows earnings breakouts to new multi-year highs, and I believe that Fortuna could easily trade above $7.95 within 12 months if the company reports over $0.40 in annual EPS in H1 2021.

If we look at quarterly revenues above, it was a rough quarter, with revenue coming in at $44.5 million, a new 2-year low for Fortuna Silver. However, this revenue figure was artificially low due to the San Jose Mine shutdown. In fact, it is merely a blip in a new uptrend in quarterly revenue that’s expected to begin in Q3 2020. As we can see from the Q3 estimates, analysts are forecasting $73.4 million in quarterly revenue, which would be a new multi-year high for Fortuna. Meanwhile, Q4 estimates have been ratcheted up to $77.5 million, which would be another multi-year high for Fortuna. Therefore, given that quarterly revenues should hit new highs with annual EPS, the earnings trend shown above is likely sustainable. This is because the lifeblood of sustainable earnings growth is double-digit revenue growth, and Fortuna is on track for 20% revenue growth in Q3 and nearly 13% revenue growth in Q4, a massive improvement from the negative trailing twelve-month revenue growth rate currently.

Finally, if we take a look at Fortuna’s long-term debt, free cash flow, and net income, we can see that despite the weak Q2, free cash flow came in at $14.3 million, even though net income dipped to negative. This was despite one of the company’s mines being offline for most of the quarter and much lower silver prices than we have currently, suggesting that Fortuna should be able to deliver over $20 million in free cash flow going forward. Meanwhile, while the debt remains quite high at $132.6 million, Fortuna should be able to put a significant dent in this debt once Lindero is in commercial production. Therefore, while the Q2 numbers certainly aren’t pretty for net income, and free cash flow has made little progress the past year, the higher metals prices and massive cash-flow generation from Lindero should be a significant positive impact starting in Q1 2021.

While Fortuna Silver had a very tough Q2 that certainly wasn’t pretty across most metrics and Lindero has been a headache with it over budget and delayed, I believe the worst news is now behind the stock. Given the much higher margins, Fortuna should enjoy due to higher silver prices at Caylloma and San Jose and the industry-leading margins expected at Lindero; the stock is finally beginning to turn the corner. Meanwhile, the fact we’re on track for an earnings breakout year is a very bullish development, as long as Lindero can perform as expected from the Feasibility Study. Based on these positive developments, I have reversed my thesis from Sell above $5.50 to Speculative Buy below $5.15. While I am not long Fortuna currently, I would expect the valuation to turn into a significant tailwind on any sharp pullbacks towards the $5.15 level.