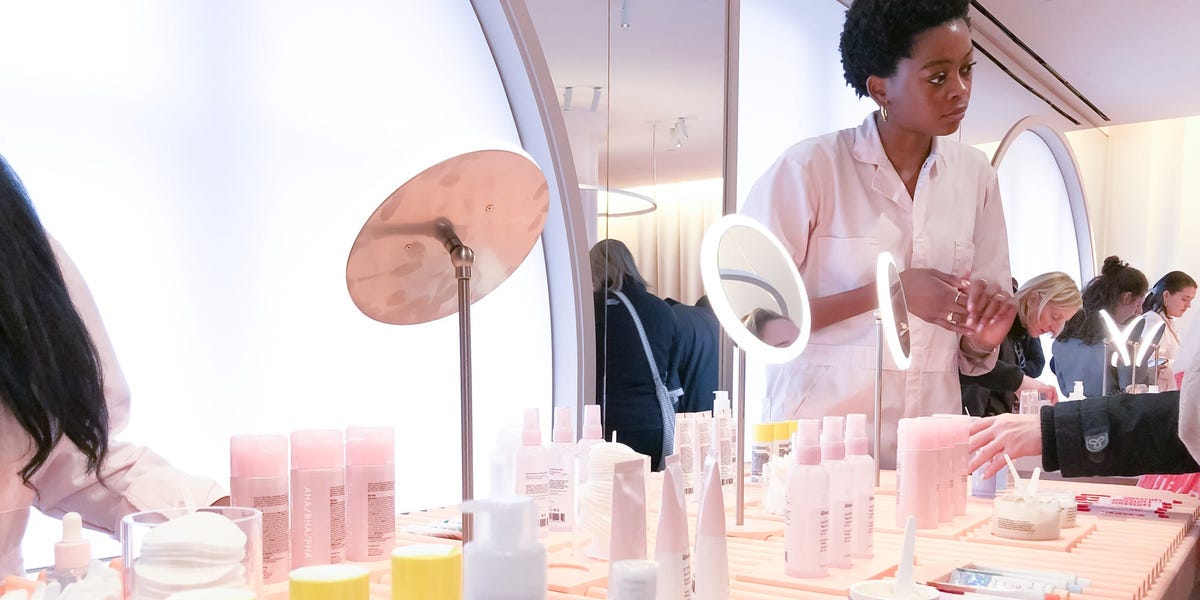 The letter was published August 13 on Medium, Instagram, and Twitter by the account Outta The Gloss, a play on the company’s content blog Into The Gloss. It states it was drafted August 7, before Glossier laid off its retail staff that had been furloughed since June. Glossier has three permanent stores, in New York, Los Angeles, and London.

In the letter, titled To Glossier: A Call for Accountability and Necessary Change, the former retail employees alleged that the company did little to intervene when they, most of them identifying as LGBTQIA+ and/or BIPOC, reported racially charged incidents with customers. Employees also wrote that retail staffers (called “offline editors” at the company) were treated as afterthoughts to corporate employees.

“The brand emanates progressivism, but many of the workplace abuses you’ve heard coming from booming boy’s club tech companies happened to us, too,” the letter states. “They were facilitated by the same ‘dynamic,’ ‘rapid growth’ strategies that privilege the bottom line at the expense of the people who bring the brand to life.”

Many of the claims outlined in the letter echo those of eight former employees who previously spoke to Business Insider. They described incidents where employees of color were discriminated against by managers and customers and corporate employees patronized store workers.

The allegations make Glossier the latest startup after Everlane, Away, and Reformation to face claims of problematic work cultures while portraying themselves as champions of inclusion and diversity.

On Monday, Glossier posted a statement on its official Instagram page listing details of “an early blueprint” to improve its culture moving forward. In the post, the company wrote it listened to “many hours of Zoom calls” from employees sharing stories of discrimination at the company to inform new policies such as anti-racism trainings, improved hiring protocols, and additional HR support, among others.

“We are grateful to our former colleagues for coming forward to share their lived experiences, and want to apologize and publicly acknowledge the pain and discomfort they experienced,” Glossier said in a statement to Business Insider.

Glossier CEO and founder Emily Weiss also responded to the open letter in a post on the Glossier website on August 14. She said she spoke with “more than a dozen retail team members” in July and called for a plan to “build a better work environment.”

The letter stated store workers endured microaggressions, sexism, and racism and that management either couldn’t be relied on to deal with the incidents or didn’t intervene. For example:

While employee complaints were disregarded, customers who complained were pacified with gifts and full refunds, according to the letter.

Working conditions were another area of concern. In the letter, former employees cited a lack of air conditioning in the New York showroom one summer; violations of occupancy limits; and being forced to eat lunch in a room “riddled with rat waste.”

One, Lina Mohammed, a former part-time employee, identified herself as a Black hijabi Muslim. Speaking to Business Insider today, she said her manager “rolled her eyes” when she asked for leave to celebrate the festival of Eid.

“It’s about time someone spoke about this unspoken culture,” Mohammed said of the open letter. “They embrace diversity in their advertising and imagery, but it’s not like that in their actual spaces  — it’s far from that.”

A second former employee of color told Business Insider in May that customers often touched her and made racist comments about her appearance, and that management tossed off her complaints.

“There was no support for the fact that people would just come up to us and touch our hair or people would touch my face and make comments like, ‘I need someone with my skin tone to help me,'” she said.

The employee also said managers asked staffers of color to put up their natural hair while working on the floor, claiming they were told it looked “messy or unprofessional,” a request not made of white employees.

“They would come into our space, get fitted into a jumpsuit, then immediately start taking selfies instead of doing their jobs,” the employee said. “If they were really there to learn, they’d throw themselves in.”

A fourth former employee, also speaking on the condition of anonymity, said she thought the challenges her colleagues of color faced at work stemmed from the fact that the company’s leadership was mostly white.

“They don’t intervene. At the end, we’re kind of left by ourselves,” this person said.