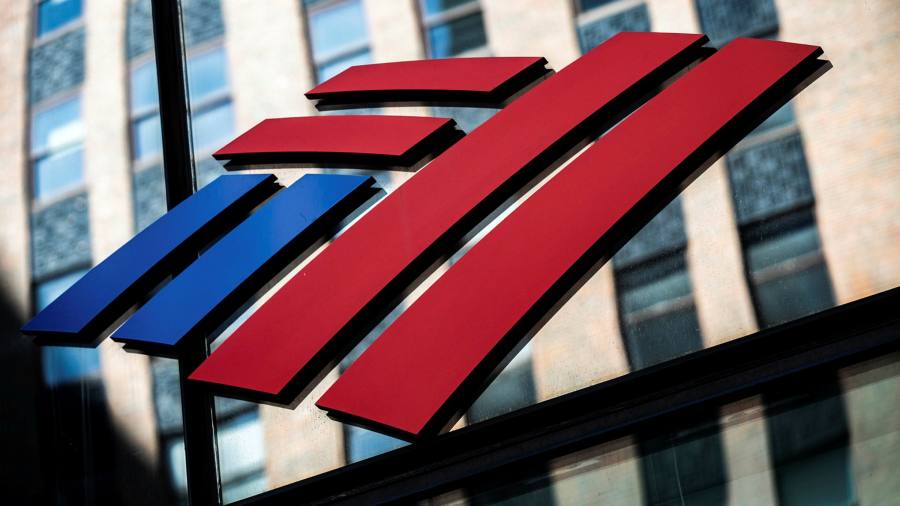 On Wednesday, BofA and Wells reported third-quarter net profits of $4.8bn and $2bn, respectively — $1.3bn and $4.4bn higher than in the second quarter. Much of the improvement was down to lower provisions for bad loans, as the outlook for the American economy stabilises.

Wells Fargo’s mortgage business had a bumper quarter behind a wave of home refinancings, and Bank of America saw fees rise in its credit card business. Investment banking fees were strong at both banks, reflecting a strong environment for public offerings and mergers.

None of this was enough to offset damage done by falling interest rates, however. Net interest income (total revenue from interest-bearing assets, less interest paid for financing) fell 7 per cent, to $10.1bn, at Bank of America, between the second and third quarters, and was 17 per cent lower than a year ago. The year-on-year quarterly decline was just under 20 per cent at Wells. Net interest income represents about half of revenues at both banks.

Shares in BofA and Wells fell 3 and 5 per cent, respectively, in midday trading on Wednesday.

“People are looking at the areas of strength and saying, those are volatile, and then looking to the net interest income picture, which paints a much tougher picture for next year,” said Jeffery Harte, an analyst at Piper Sandler. As a result, he said, bank shares were increasing trading in line with movements in the 10-year Treasury yield, rather than with the wider industry profit outlook.

The 10-year US Treasury yield, the standard benchmark for long rates, has fallen from 1.7 per cent to 0.7 per cent over the past year, as the Federal Reserve eased monetary conditions in response to Covid-19. As rates fall, loan yields and the returns on banks’ bond portfolios drop faster than deposit costs, tightening margins.

Both banks also noted the weakness in demand for corporate loans, reflecting companies turning to the wide-open bond markets for funding and lower overall demand for credit.

BofA chief financial officer Paul Donofrio said that the pain from falling interest rates may soon abate. “We believe the third quarter will probably be the bottom for net interest income and we are optimistic it will move higher in 2021,” he said. “Commercial loan utilisation rates are at historically low levels [and] the economy is expected to slowly grind forward.” Credit card spending is accelerating too, he noted. JPMorgan made a similar case when it reported results on Tuesday.

Charles Peabody of Portales Partners said: “An inflection in net interest income does seem to be upon us — I do think there will be more loan demand, led by an improving main street economy.”

Meanwhile, Piper Sandler’s Mr Harte was more cautious. “I’m a little sceptical the third quarter will be the trough,” he said. “Rotation away from loans [and towards lower-yielding bonds] still seems to be ongoing, and to an extent so is the repricing of securities, [and] it’s hard to make the case that interest rates get better. Unless the economy really starts to grow, it is a pretty stagnant environment.”