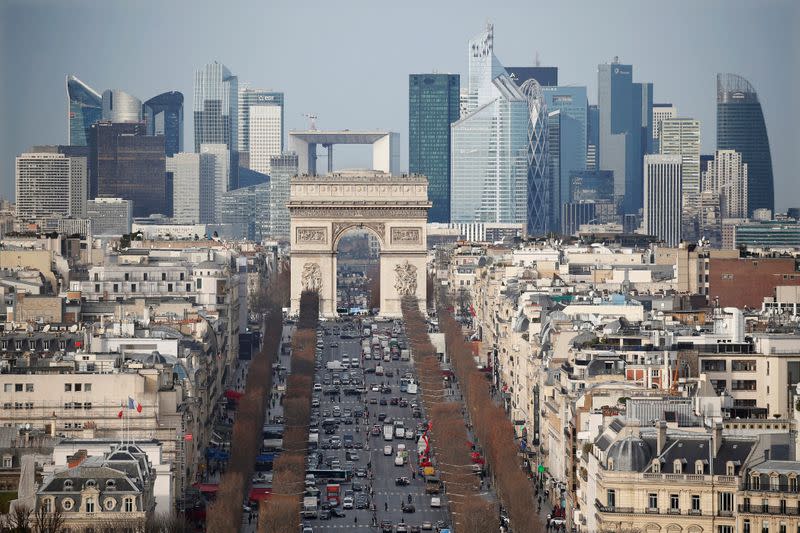 By Shrutee Sarkar and Richa Rebello

BENGALURU (Reuters) – A full bounceback from the euro zone’s deepest recession on record will take two years or more, according to a Reuters poll of economists who also said there is a high risk the job recovery underway reverses by the end of 2020.

Europe was badly hit earlier this year by the coronavirus pandemic, which has now infected more than 22 million people globally. But stringent lockdowns and contact tracing helped get the numbers down and allowed swift re-openings.

Along with trillions of euros’ worth of European Central Bank stimulus and a 750 billion euro European Union recovery fund that kicks in next year, sentiment has improved, and the economy is bouncing back along with the euro.

The consensus from the Aug 14-19 Reuters poll points to 8.1% growth this quarter compared with the previous one, easily the fastest on record, following a historic 12.1% contraction in Q2. That is unchanged from the July poll median.

In May, around the time lockdowns were lifted in most euro zone countries, the Q3 forecast was for 7.2% growth.

Quarterly growth will then slow sharply to 3.0% in Q4, slightly better than the 2.8% predicted last month and still a historically robust rate.

However, more than 70% of economists, or 25 of 35 who replied to an additional question, said it would take two or more years for euro zone GDP to reach pre-COVID-19 levels. Ten respondents said within two years and none said within a year.

“Despite the recent recovery in economic indicators, the better-than-feared performance of labour markets and the recent agreement on the Recovery Fund, we still see various downside risks to the economic recovery,” said Elwin de Groot, head of macro strategy at Rabobank.

“Although there have been encouraging reports with regard to a potential (COVID-19) vaccine by early 2021, as long there isn’t any effective one, containment measures will have to be kept in place regardless. A second series of partial lockdowns could have some serious economic effects.”

Around three-quarters of common contributors to this month’s and last month’s poll either lowered their GDP forecasts for the remainder of the year or kept them unchanged.

Asked to predict their worst-case scenario, the median response was 4.0% this quarter, much better than the 2.0% forecast in last month’s poll. But the worst-case view points to a 2.0% contraction in Q4, the most pessimistic yet for that period.

Much will depend on how the job market performs from now on.

Thanks to wide-reaching government furlough programmes that have helped businesses retain workers, euro zone unemployment has risen only slightly to 7.8% in July from 7.2% in February.

But about 85% of economists in the poll, 28 of 33 who responded to an additional question, said the risk the job recovery reverses by year-end was high, including four who said very high.

“Euro zone unemployment almost looks like a Cinderella story. With barely any increase in unemployment, it is currently the belle of the global labour market ball, at least compared to many other developed economies,” said Carsten Brzeski, chief economist, eurozone and global head of macro at ING.

“When the clock strikes midnight, however, and short-term work schemes come to an end, the fairy tale is unlikely to continue. We expect a second wave of job losses towards the end of the year and going into 2021.”

Inflation was not expected to touch the ECB’s target of below, but close to 2% through to 2022, according to the latest August survey. The ECB’s key interest rates are expected to stay on hold through the forecast horizon.

(For other stories from the Reuters global long-term economic outlook polls package:)