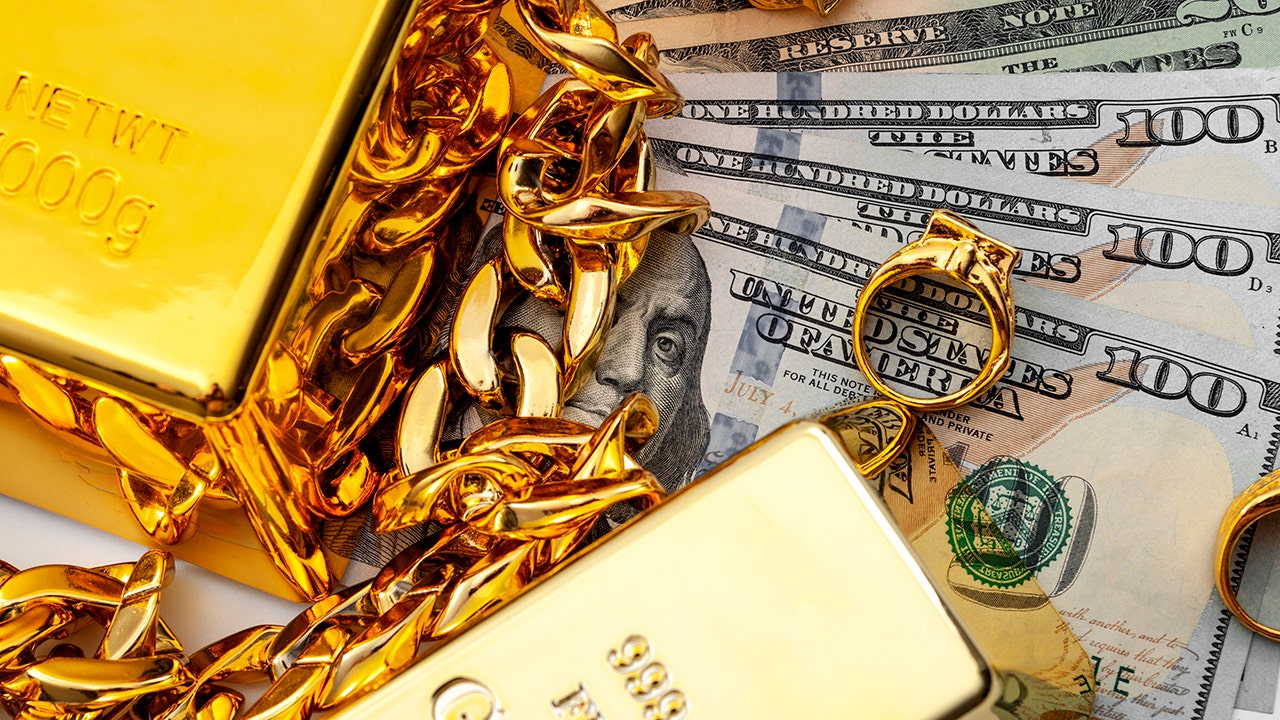 The 2020 gold rush in markets is starting to unnerve even some longtime fans of precious metals.
Gold futures are near records and up about 28% for the year, while silver has more than doubled since hitting a multiyear low in March. The moves aren’t entirely surprising, given the scale of the coronavirus-driven economic shock and the countervailing global stimulus led by governments and central banks. Many investors fear economic stagnation, an outbreak of inflation or some combination of the two — a recipe for rising demand for metals viewed as a store of value in trying times.
But with the rush into gold has come an increase in volatility that many traders don’t welcome. Both metals have dropped about 6% or more from peaks hit this month and are recording bigger daily swings than normal, suggesting that gold and silver have joined U.S. tech stocks among the most crowded trades in markets — creating the risk that months of outperformance could vanish in a day or two of frenzied selling should market or economic conditions turn.
“Almost everybody is talking about gold….That is a warning signal in a way,” said Luca Paolini, chief strategist at Pictet Asset Management, which is holding more gold than its market benchmark but may sell some if volatility continues. “At least until the election in the U.S., this volatility will persist.”

DAVE RAMSEY: HERE’S WHEN IT’S BETTER TO PILE UP CASH THAN INVEST
Some traders blame the increasing popularity of exchange-traded funds that afford both retail and institutional investors cheaper, easier access to commodities such as gold, silver and other metals. They say that while ETFs such as the SPDR Gold Shares Trust marketed by State Street Global Advisors have been part of the market landscape for more than a decade, the surge in ETF buying of gold and silver stands to accentuate price swings, potentially intensifying the boom-bust cycle often seen in these and other commodities.


“Because of the very high interest in ETFs by retail investors, you might see swings that you haven’t in the past,” said Ellen Hazen, a portfolio manager at F.L.Putnam Investment Management, which bought gold through an ETF in March. Still, she believes the metal offers an effective long-term hedge against inflation.

TESLA DRIVES INTO ‘BUBBLE’ TERRITORY BEFORE LUCRATIVE STOCK SPLIT
ETFs backed by gold are growing at the fastest rate on record and have raked in nearly $50 billion this year, well above the previous record for annual inflows, according to the World Gold Council. Assets managed by the SPDR Gold Shares and iShares Gold Trust have risen 60% this year, while smaller ETFs such the GraniteShares Gold Trust are growing at an even quicker pace.
Investors tend to put money in metals when they are nervous about the economy and believe inflation will rise faster than interest rates. Climbing inflation reduces the dollar’s purchasing power, meaning it takes more dollars to buy the same amount of metal. Low interest rates make the metals, which don’t offer holders any regular payouts, more appealing relative to income-generating assets such as safe bonds.
Low inflation-adjusted interest rates also have lifted stocks by making bonds less attractive, pushing many investors to take on more risk in equities. The trend explains how gold and stocks rallied in tandem for months, with the S&P 500 hitting new records last week.

WATCH: PAYNE: STOCK PULLBACKS ARE GOOD FOR INVESTORS
Gold has averaged a daily move of 1.2% over the past five weeks, nearly double the typical swing since the start of last year. Silver is moving nearly 4% a day on average, roughly triple its normal daily change.
The metals also have fallen sharply on certain days, without obvious explanation — a sign in the view of many market participants that speculators are becoming a larger proportion of the market. On Aug. 11, gold slid about 4.5%, while silver fell 11%. And last Wednesday, both metals dropped roughly 2%.
Many precious-metals ETFs are backed by physical gold and silver, but many traders say inflows and outflows also affect the futures markets because the ETFs have gotten so large that they represent a large chunk of investor demand.
ETFs backed by physical gold held about 3,620 metric tons at the end of June, World Gold Council figures show, more than any country other than the U.S. Silver ETFs also represent a sizable portion of investor demand. With physical demand for jewelry and bars and coins falling, ETFs represented about 40% of global gold demand in the second quarter, up from 6% in the same period a year earlier.
When individuals buy shares of an ETF that is backed by physical gold or silver, they are buying a stake in a trust. The asset held by that trust is metal.
One of the ways traders make a market in the ETF — typically banks and other traders such as Virtu Financial Inc. — is to buy physical metal from traders on the open market, typically from banks, such as JPMorgan Chase & Co. and HSBC Holdings PLC, that commonly trade precious metals.
As a result, large inflows signal that the metals are in high demand from global investors, a trend that then helps dictate sentiment in the futures market. The traders selling to the ETF traders might also seek to hedge against a price increase by purchasing futures contracts, creating another link between ETFs and metals prices.

CLICK HERE TO READ MORE ON FOX BUSINESS
The trend can work the opposite way when money flows out of the ETFs. When precious metals tumbled alongside stocks back in March, traders said the fall was generally due to investors pulling money out of haven metals to raise cash, and outflows from ETFs helped make the declines in gold even more severe.

GET FOX BUSINESS ON THE GO BY CLICKING HERE
“I really believe this is pure speculation,” said Campbell Harvey, a Duke University finance professor who has argued widespread use of gold ETFs can cause prices to overshoot market fundamentals. “There are some people playing the momentum trade…If there is a turning point, they’re going to be crushed.”
–Joe Wallace contributed to this article.