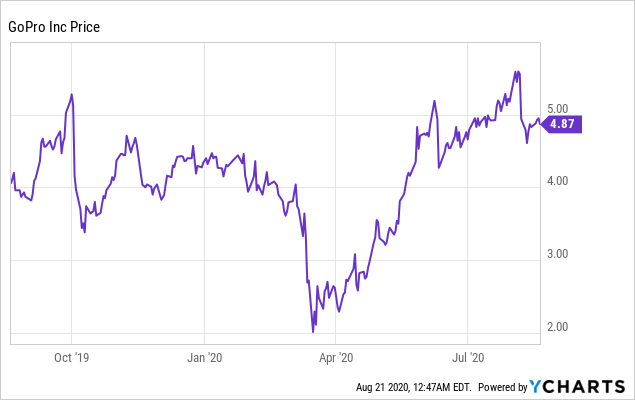 Don’t Underestimate GoPro As It Hunkers Down On Profitability (NASDAQ:GPRO)

For almost as long as it’s been a public company, GoPro (GPRO) has been in the market’s penalty box. Decently popular as a consumer gadget, but never really catching on as a company, investors and Wall Street have critiqued GoPro’s niche hardware products, unpredictable replacement cycles, and lack of innovation in bashing down the stock.

Yet this year, GoPro has executed reasonably well – despite a coronavirus that has prevented most of us from traveling, and thus from needing GoPro’s action cameras. In my view, the company – and its founder/CEO Nick Woodman – has dramatically culled back its ambitions and megalomania and is resolved to operating as a smaller, more profitable company.

In early August, GoPro recorded better-than-expected revenue results driven by strong sales of its higher-end cameras. And though hardware companies like GoPro have the ability to “stuff the channel” in order to hit quarterly targets, GoPro also reported strong end-customer sell through and noted a reduction in channel inventories.

Though they now mostly fly under the radar and beneath the shadow of far more popular software and internet stocks, several small consumer hardware companies have netted big payoffs for investors this year. Arlo (ARLO) is one of the best examples of this. I recommended Arlo in early July at <$3/share after noticing that its balance sheet cash virtually equaled its market cap (indicating a company that was essentially trading for free); since then it signed on a major partnership that is expected to boost growth and posted strong results, sending shares up more than >2x.

I now see a very similar opportunity in GoPro, driven by its highly increased operating efficiencies and commitment to profitability. I also like the fact that earlier in the month, GoPro announced the launch of its lifestyle gear brand. While unlikely to materially change GoPro’s growth trajectory, it does position GoPro into becoming a millennial-oriented brand, in the same vein as a Yeti (YETI) or a Casper (CSPR).

The lifestyle lineup is starting off with a range of travel bags, and the company is planning to launch other accessories on August 19.

GoPro also noted that its GoPro Plus subscribers (its photo storage subscription at $5/month) get a 30% discount on GoPro gear, offering a nice tie-in and incentive to get invested into the GoPro ecosystem. It’s narratives like these, in my opinion, that could get the market to view GoPro in a new light.

As previously mentioned – it’s important to understand that for a product company like GoPro that does most of its business through reseller partners, that GoPro has the ability to influence its current-quarter results by selling more or less supply to its channel partners at the end of the quarter. But GoPro’s disclosure on channel inventory – down 25% sequentially, and 45% since the end of Q4 – assures that no channel stuffing took place (though the 45% reduction statistic since Q4 is a bit skewed, since virtually every company reduces inventory after the Christmas season ends).

A couple other highlights are worth mentioning. Due largely to the pandemic, GoPro’s share of e-commerce revenue hit an all-time high of 44% in the quarter, up significantly from 9% in the year-ago quarter.

We also note that GoPro’s mix of higher-end units shone in the quarter as well, with cameras priced above $300 making up more than 95% of GoPro’s revenue (essentially meaning the HERO8 Black and the GoPro Max are significantly outselling the HERO 7s). The company also commented that street ASPs (the price at which cameras are being sold by retailers) grew 11% y/y to $300.

Likewise, GoPro Plus somehow continues to see strong growth despite the notion that people aren’t traveling and using their cameras right now. The company ended the quarter with 372k subscribers, up 5% sequentially by 17k subscribers versus 355k at the end of Q1, and up 57% y/y. Assuming a $4.50 average monthly price between the $5/month and $50/year plans, this subscriber base generates a respectable ~$1.7 million monthly revenue run rate and ~$20.1 million in annual revenues. Note that if you were to value GoPro’s services segment alone at the typical mid-teens revenue multiple typically accorded to high-growth software startups, GoPro Plus alone would be worth north of $200 million.

Then there’s all of GoPro’s profitability hopes to lean on. The company has been making good on its promise to slim down its size, and it ended Q2 at a multi-year headcount low of 741 employees.

In the Q&A portion of the Q2 earnings call, GoPro’s CFO Brian McGee also noted that the company “has a shot” of being profitable for the full second half of 2020:

And given the fact that we think we’re going to be profitable in Q3 on a non-GAAP basis between $0.01 and $0.07 per share, and what and we’ve got the year could be basically close to breakeven, and maybe even slightly profitable. So, yes, we think we have a shot of being profitable. So the demand profile continue in a way we think it will for the remainder of the year.”

We note that consensus is calling for pro forma EPS of $0.52 alongside 19% y/y revenue growth next year (per Yahoo Finance), so GoPro’s current <10x P/E ratio looks quite conservative.

There’s a lot to like about GoPro as the company has many catalysts that could vault the stock higher from its current <$1 billion market cap. Hitting profitability is one of these drivers, and a successful conversion into becoming a outdoor lifestyle brand like Yeti is another. Keep on the lookout for an entry point here.

For a live pulse of how tech stock valuations are moving, as well as exclusive in-depth ideas and direct access to Gary Alexander, consider subscribing to the Daily Tech Download. For as low as $17/month, you’ll get valuation comps updated daily and access to top focus list calls. This newly launched service is offering 30% off for the first 100 subscribers.

Disclosure: I am/we are long GPRO. I wrote this article myself, and it expresses my own opinions. I am not receiving compensation for it (other than from Seeking Alpha). I have no business relationship with any company whose stock is mentioned in this article.