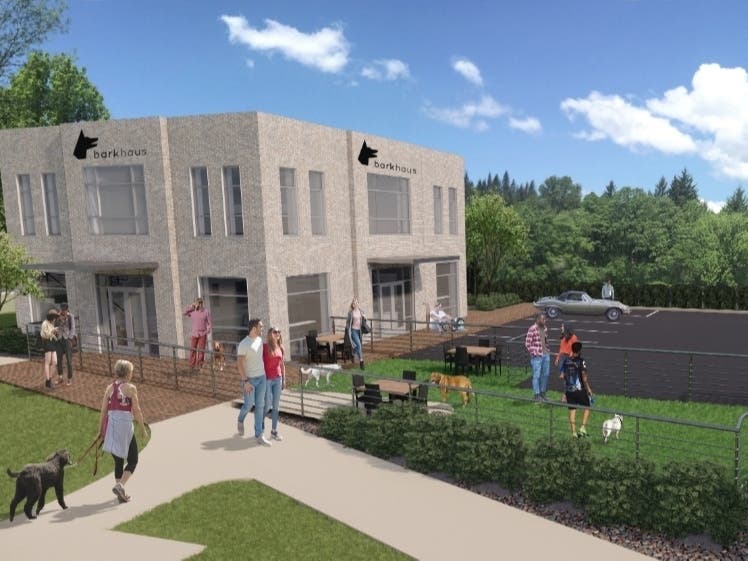 ALEXANDRIA, VA — A dog bar is preparing to establish a footprint — or rather paw print — in Alexandria. Barkhaus aims to open in the fall at 529 East Howell Avenue.

Co-owners Alex Benbassat and Justin LeGore, who were roommates at Virginia Tech, will open Barkhaus as a part restaurant, part dog park concept. At Barkhaus, customers will be able to enjoy food and drinks while their dogs interact with others in the indoor and outdoor off-leash dog park. The dogs must be registered as members and provide proof of vaccinations before attending.

According to Benbassat, eating will only be allowed in zones where dogs are on leashes. Only beverages will be permitted in off-leash areas, which will be enclosed with fences and have double entries to keep dogs from escaping.

The restaurant side will feature a menu collaboration with The Laughing Pig, a catering company based in Cody, Wyoming specializing in high-end meals for weddings, events and celebrity teams. This time around, The Laughing Pig’s Jacob Scott and Porter Koury developed a menu for the Barkhaus owners. Along with food, Barkhaus will offer locally sourced craft beer and wine will also be featured.

Benbassat and LeGore met in 2014 during their undergraduate studies in Virginia Tech. After graduating LeGore moved to Charlotte to work for a startup company, while Benbassat was interning for an architecture firm in the same city. They ended up rooming together again, and their future business idea was inspired by visits to the local dog park and bar with Benbassat’s dog.

After LeGore moved with the startup company to Washington State, he started writing a business plan for a dog park and tap house in the DC region. Then he learned Benbassat had moved to Alexandria to finish his five-year architecture degree and was creating a thesis program on a dog bar, park and shelter.

The two decided to become business partners and worked with the Alexandria Small Business Development Center on the business side of their concept. With guidance from Virginia Tech and the city, the co-owners feel prepared to run the business on their own.

Barkhaus first put its name out in the Alexandria community by hosting the Old Town Beer, Wine and Dog Festival in August 2019. With an off-leash dog area, local breweries and wineries, live music, food trucks, and adoptable dogs, the festival provided a mockup of what the business concept would look like.

According to Benbassat, construction is underway, and they hope to open in late September or early October.

The Barkhaus location is the former home of Flat Top Burger, which says on its website it will open in a new location. An announcement on that new location has not been made.

In light of challenging times for businesses during the pandemic, the Barkhaus co-owners are seeking donations or purchases from their online shop to help with startup costs. More details on Barkhaus memberships will be announced. For future updates, visit brewskisbarkhaus.com.