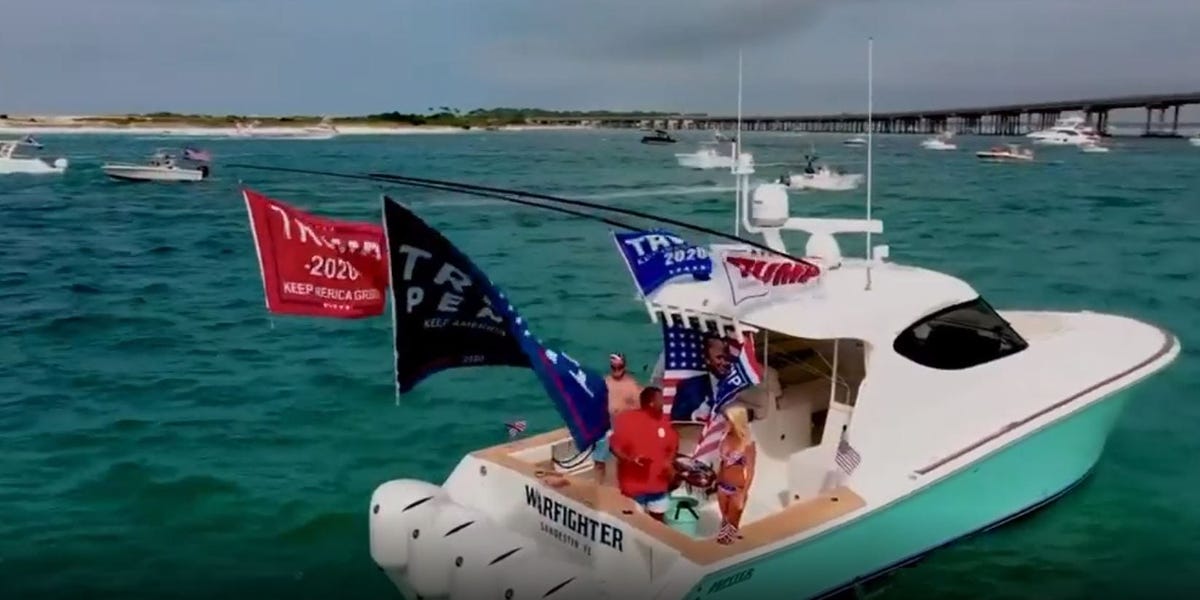 Brian Kolfage, a wounded Air Force veteran who was indicted for fraud alongside former Trump adviser Steve Bannon, allegedly used funds crowdsourced for a wall along the US-Mexico border to pay for a luxury boat, one that appears to have taken part in a Trump-inspired parade in Florida.

Federal prosecutors are charging Kolfage and Bannon, as well as Andrew Badolato and Timothy Shea, with conspiracy to commit wire fraud and conspiracy to commit money laundering for allegedly defrauding hundreds of thousands of people who donated funds to the “We Build the Wall” campaign, which raised over $25 million.

Each charge carries a maximum penalty of 20 years in prison.

“While repeatedly assuring donors that Brian Kolfage, the founder and public face of We Build the Wall, would not be paid a cent, the defendants secretly schemed to pass hundreds of thousands of dollars to Kolfage, which he used to fund his lavish lifestyle,” Acting US Attorney for the Southern District of New York Audrey Strauss said Thursday.

The indictment that came down Thursday says that Kolfage received $350,000 in donor funds, which he then used “to pay for his own personal expenses,” including “payments toward a boat.”

The US government is seizing “any and all property, real and personal, that constitutes or is derived from proceeds traceable to the commission” of the alleged offenses. In addition to millions of dollars being seized from various bank accounts, the US government is also taking possession of a 2019 Jupiter Marine boat named “Warfighter.”

The vessel, according to the Jupiter website, offers “premium yacht amenities with dependable outboard propulsion without sacrificing thoughtful fishability.” The 40-foot-long boat and its 4 outboard motors have featured prominently on Instagram. The company boasts this “beautiful” boat can run up to 1,200 horsepower, with a reported top speed of 52 mph.

While Thursday’s indictment does not state specifically who among the four defendants purchased the boat, the luxury fishing vessel has made several appearances on Kolfage’s Instagram page.

In one video posted to the account, the boat can be seen participating in a Trump parade in Destin, Florida on the Fourth of July.

In 2004, Kolfage deployed to Iraq as a junior enlisted airman. An enemy rocket shell exploded at Kolfage’s base, and he lost both of his legs and an arm to the attack.

Kolfage continued serving in the Air Force as a base security manager. He later went on to earn a degree from the University of Arizona’s School of Architecture in 2014. He has played an active role in US politics, serving on a veterans advisory council for then-Democratic Rep. Gabrielle Giffords of Arizona in 2012.

Kolfage has been an outspoken supporter of Trump and his allies. He frequently posts politically-charged stories and memes on his Instagram account with nearly 70,000 followers.

In 2018, he launched a GoFundMe campaign to raise $1 billion that was to go to the government for a border wall.

In 2019, Kolfage changed course, announcing that the crowdsourced funds would go to a non-profit organization, We Build The Wall Inc, that would independently build the US border wall. To avoid refunding donors, he privately persuaded people to transfer their donations over to the new organization, according to Task & Purpose.

Kolfage’s Instagram account was still soliciting donations associated with the “We Build the Wall” campaign as late as last week.

“This case should serve as a warning to other fraudsters that no one is above the law, not even a disabled war veteran or a millionaire political strategist,” Inspector-in-Charge Philip R. Bartlett said Thursday.

Kolfage did not respond to Insider’s request for comment.