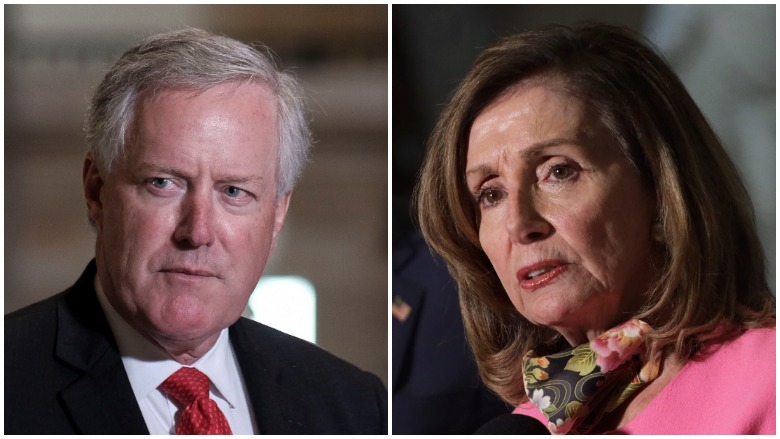 Political negotiations over the next stimulus package as well as state and local aid, have continued to stall after White House Chief of Staff Mark Meadows tried and failed to meet with House Speaker Nancy Pelosi on Saturday, August 22, the Washington Post reported.

Both Meadows and Pelosi, however, have continued sending messages to one another through the media and neither are showing signs of budging from their positions.

Meadows, speaking for Republicans and the Trump administration, wants a “skinny” bill that would only address the needs of small businesses and individuals. Democrats in Congress, led by Pelosi, are demanding aid for states and localities to provide more coronavirus tests and other essential functions as well as money for schools, rental and food assistance and the U.S. Postal Service to ensure pandemic-era absentee voting goes smoothly.

Pelosi had called an emergency Saturday session to vote over a $25 billion assistance package for the U.S. Postal Service, according to CNBC. The bill passed the House but is expected to face resistance in the Senate.

Meadows & Pelosi Have Not Met Since August 7, CNN Reported

Meadows Visits Capitol to Push Democrats on Stimulus White House chief of staff Mark Meadows returned to the U.S. Capitol on Saturday in a bid to pressure Democrats into accepting a slimmed-down economic stimulus bill after weeks of deadlock. https://t.co/S1v24rIZr8

According to the Washington Post, Meadows dropped by Capitol Hill to speak with members of congress about COVID-19 relief. However, he also showed up at Pelosi’s office in hopes that he would be able to persuade her to drop the nearly $1 trillion in state aid Democrats are asking for.

According to The Hill, Meadows dropped by Pelosi’s office unannounced and, as a result, was unable to meet with Pelosi: “He showed up with no notice. Speaker was in a leadership meeting,” a senior Democratic aide said.

Since talks initially broke down on August 7, Meadows said that he and U.S. Treasury Secretary Steve Mnuchin had tried reaching out to Pelosi, but to no avail. “I will reach out to the Speaker,” he told reporters, according to The Hill. “I went by. She was in a meeting, and … the secretary reached out a few weeks ago. She made it clear at that point that there was no real need to continue to vote.”

Pelosi has repeatedly said she would not accept a “skinny” stimulus package bill or even bring it to a vote. Pelosi told a PBS NewsHour anchor that she doesn’t trust Republicans to take up the issues of funding the postal service and/or state aid once a package is passed.

Meadows, however, did say that Pelosi’s decision to make U.S. Postal Service funding its own bill showed progress; he has repeatedly said that he doesn’t want the next stimulus package to be a “partisan wish list,” according to the Washington Post.

“We’re taking this vote on the House floor as a real willingness on her part to look at a more targeted solution,” he said, according to The Hill. “Let’s at least pass what we all agreed to and then leave the things that we don’t agree to perhaps a more laborious negotiation.”

Where Do the Two Sides Stand on a Stimulus Package?

Speaker Pelosi on stimulus: “This isn’t a discussion about just dollars — it’s about values.” pic.twitter.com/XRvBJ06bY9

At a press conference held early Saturday, Pelosi was clear that she’s not interested in the Republicans’ proposal of a slimmed-down version of the HEROES Act, which passed the House in May.

Pelosi went on to describe the Republicans’ proposal as unacceptable and said, “His list is very deficient,” according to the Post. However, she did say that if Republicans consider adding the items she listed to a package – money for state and local governments, schools, testing, evictions and other issues – negotiations might be restarted.

“Those issues are not as divisive as one might think,” Meadows said of Postal Service aid, stimulus checks, unemployment insurance expansion, small business support and additional funds to schools. But Meadows said that he’s still hung up on the Democrats’ demands for $1 trillion in state and local aid because he doesn’t believe that aid is “based on real needs,” according to The Hill.

Pelosi is receiving pressure from her own party, as evidenced by a letter from more than 100 Democrats urging her to pass a small stimulus package and work on the remaining issues later. On the other hand, Senate Majority Leader Mitch McConnell, who has refused to put the HEROES Act up for a vote, has also faced criticism, especially for comments he made suggesting that states and localities should declare bankruptcy rather than ask for additional federal funding.

Yet it doesn’t appear that either side is willing to give in just yet. According to what Democratic Senator Tim Kaine told Politico, he doesn’t expect negotiations to get serious until the Republican National Convention passes.

“I actually think there is going to be some motive to really get down to the brass tacks right after the Republican convention,” Kaine said. “It was clear the White House, for some reason, they wanted to go into their convention blaming Democrats.”

READ NEXT: Who’s Distributing Up To $400 Extra In Unemployment Benefits? FEMA

2020-08-23
Previous Post: New Conditions on Alaskan Mine Could Delay Vast Project That Donald Trump Jr. Opposes
Next Post: Should Income Investors Look At Piper Sandler Companies (NYSE:PIPR) Before Its Ex-Dividend?