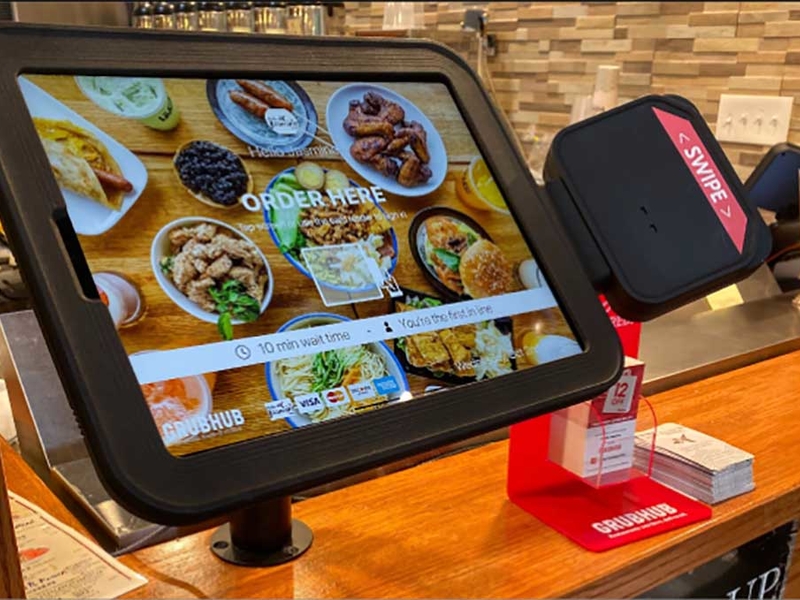 COVID-19 has been good for Grubhub’s college dining business

The coronavirus pandemic forced colleges to shut down in the spring. As they wrestle with how to bring students back to campus this fall, schools are trying to limit personal contact in dining halls as well as classrooms. Many are sharply reducing or eliminating in-person dining and encouraging students to preorder meals or reserve seating with smartphones.

“They don’t want as many people going up to the cashier—if anybody,” says Brian Madigan, Grubhub’s vice president of corporate and campus clients. “They want to eliminate the congestion and face-to-face communication. No longer are universities going to have self-service salad bars and sandwich bars for students.”

All of the online food delivery companies are likely to benefit from more college students dining out, but Grubhub has a leg up in on-campus dining, a market estimated at $10 billion in annual spending. Two years ago, it bought Tapingo, an online college-dining company. Now called Grubhub Campus Dining, the unit works with 250 schools nationwide. Grubhub’s biggest rivals, Uber Eats and DoorDash don’t have on-campus offerings, but DoorDash is eyeing the market. OpenTable, which pioneered online restaurant reservations, recently started offering its service to on-campus restaurants.

Grubhub also faces competition from Transact, a Phoenix-based company that was spun off from Blackboard last year, and Hangry, a Toronto-based tech startup. Sodexo, which operates dining facilities at 521 colleges and universities, partners with Grubhub but also has its own technology.

Grubhub doesn’t break out results for its campus-dining business. Tapingo had more than 500,000 active diners ordering tens of thousands of takeout meals a day when it was acquired. Overall, Grubhub has 27.5 million active diners and does nearly 650,000 meals a day. The company, which has accepted a $7.3 billion buyout offer from Amsterdam-based Just Eat Takeaway, says on-campus diners are a valuable pipeline for its broader business when they move out of dorms.

“A big advantage for Grubhub is we get access to freshmen, sophomores to start building that brand recognition,” Madigan says.

Grubhub’s campus app, which allows students to use their meal plans to order from dining halls and other university-controlled food providers, also is integrated into the company’s traditional consumer platform. Students pay for orders from off-campus restaurants out of pocket. “We see a good chunk of our users ordering not only on campus but also through the traditional Grubhub marketplace,” Madigan says.

Some universities, such as the University of Rochester in upstate New York, let students transfer their campus food money to the Grubhub consumer app when they shut down dining halls. Madigan says 20 universities already have made contingency plans to do the same if they’re forced to close again because of COVID-19.

“There’s a high likelihood some campuses will shut down,” Madigan says. “We’re planning ahead with them to be able to flip a switch so they can open up those dollars on the Grubhub marketplace to allow students to eat while they’re on campus.”

Indiana University is among those schools requiring students to use the Grubhub Campus app to order food from dining halls, which are closed to in-person dining this semester. Colleges pay Grubhub to use its software to manage in-person orders with kiosks. It also charges a fee on mobile orders, which is paid by the student or the school. IU is picking up the fee this semester, says Rahul Shrivastav, executive director of IU’s dining program. He declines to disclose the fee.

Shrivastav says the school began using Grubhub in January, before shutting down on-campus instruction in March. Students ordered about 26,000 meals over three months. The Bloomington campus normally serves about 24,000 meals a day.

About 250 students remained in residence halls after the shutdown, ordering their meals using the Grubhub app, providing a valuable dry run for this semester. “We learned how to customize, how to do beverages,” he says. “We were figuring it out through the summer.”

Dining on campus already has undergone a transformation from cafeterias to more closely resemble food courts and restaurants. The coronavirus is speeding up the transition to mobile ordering and delivery that’s overtaken the restaurant industry. IU, for example, is setting up two ghost kitchens that will offer delivery within a 5-mile radius.