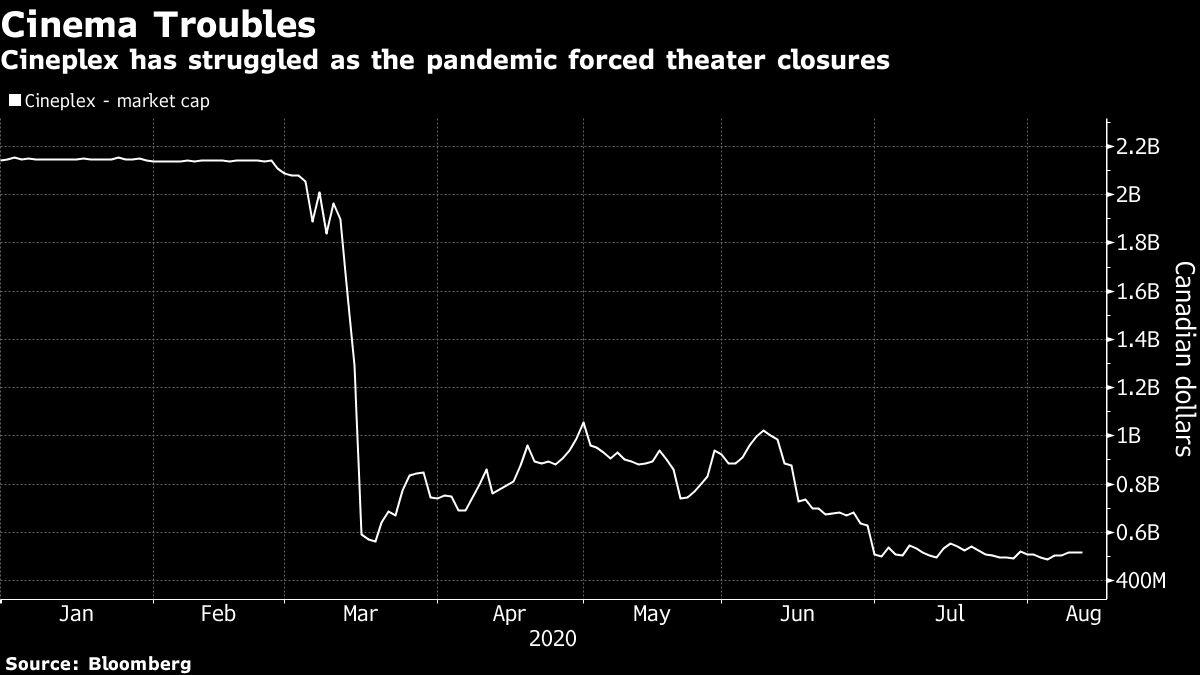 (Bloomberg) — Cineplex Inc. said revenue dropped 95% in the second quarter and that it burned through about $40 million in cash as it shut theaters because of the coronavirus.

“To immediately mitigate the impact of the closure of our theaters and entertainment venues, we focused on reducing all expenses to the greatest extent possible,” Chief Executive Officer Ellis Jacob said in a statement. “We also shifted our attention to plan for the safe return of our employees and guests and to strengthen Cineplex’s financial position over the short and long term.”

The company lost C$98.9 million ($74.7 million) in the quarter and said free cash flow was negative C$53.8 million on an adjusted basis. That was consistent with analysts’ expectations, according to Royal Bank of Canada analyst Drew McReynolds.

Canada’s largest chain of movie theaters has gradually reopened cinemas across the country as it exits from a lockdown that began in March. As of Aug. 14, approximately 80% of locations have resumed operations, the company said in a call with analysts Friday, with the remaining 20% set to open by next week.

The Toronto-based company said it’s “implementing a number of pricing and marketing strategies to entice its guests to return.” Jacob said in an interview with Bloomberg News on Friday that customers “are starved for content, and they can’t wait to come back.”

Many theaters have already reached capacity under physical-distancing rules, and attendance numbers are expected to increase as new films such as “Unhinged” and “The SpongeBob Movie: Sponge on the Run” come out, he added.

Cineplex said in June it was working with lenders on a deal to relax financial covenants after London-based Cineworld Group Plc, the world’s second-largest cinema group, scrapped its deal to take over the Canadian chain, alleging breach of contract. Cineplex denied the claim and has filed a suit against Cineworld, seeking billions in damages. The trial is tentatively set for September 2021.

The merger would have created the biggest operator of movie theaters in North America. Now, the stock is the worst performer in the S&P/TSX Composite Index this year, falling about 75%. The shares rose as much as 6.6% as of 12:41 p.m. in Toronto on Friday, the biggest intraday gain in about a month.

The company doesn’t expect to see breakeven results in the third quarter, but added it expects 2021 to be a “very strong year” at the box office with the release of highly anticipated titles, such as “Minions: The Rise of Gru.”

“While it is impossible to predict how long this crisis will last and how significant the impact will be on our business, Cineplex will continue to take the necessary steps to strengthen the financial position of our company and ensure a healthy future,” Jacob said.

2020-08-14
Previous Post: Past 73, India’s future is in Modi’s hands
Next Post: The big ‘surprise’ that could send stocks higher: Morning Brief