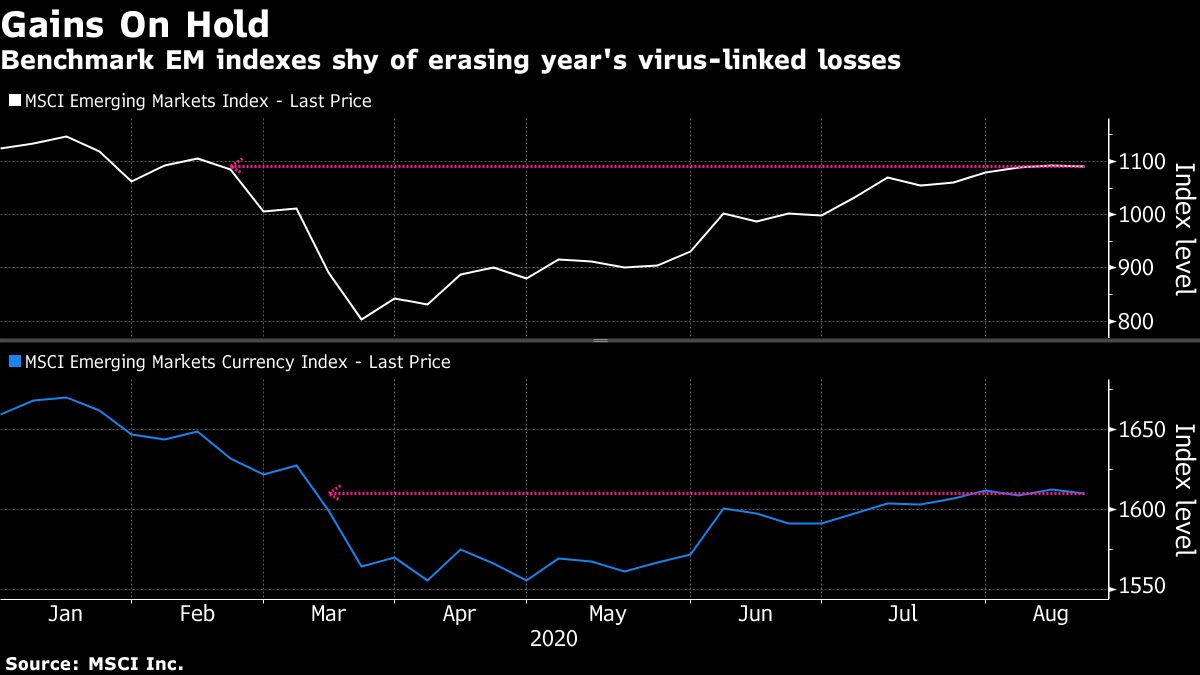 (Bloomberg) — The final week of August may prove key for emerging markets attempting to erase this year’s losses as investors fret that rising U.S.-China tension will overshadow optimism on vaccine developments.

Stocks, currencies and dollar bonds from the developing world fell last week after President Donald Trump called off a meeting on the trade pact. MSCI Inc.’s emerging-market equity gauge halted a four-week winning streak, while Brazil’s real and Russia’s ruble led losses in 13 of 24 currencies tracked by Bloomberg. Dollar bonds slid for a second week, the first back-to-back decline since the pandemic was declared in March, a Bloomberg Barclays index shows.

Investors are seeking confirmation of revised timing for the U.S.-China talks as the yuan dances around the key 6.90 per dollar level. The Trump administration ratcheted up pressure on China last week, suspending its extradition treaty with Hong Kong and ending reciprocal tax treatment on shipping with the former British colony. The move came after China imposed a national security law that led to charges against more than 20 pro-democracy activists.

“The main thing markets will continue to focus on is U.S.-China,” said John Malloy, co-head of emerging and frontier markets at RWC Partners in Miami, which oversees $8 billion in emerging and frontier assets. “As we get closer to the election, we’re going to see more rhetoric coming out of the U.S. government and probably responses from Chinese authorities as well.”

Currencies from the developing world may not attract inflows without promising vaccine news, according to Citigroup Global Markets Inc. strategists including Dirk Willer in New York. Credit markets will also pay close attention to scientific developments to track when economies can reopen without the risk of a resurgence.

“Markets should continue to trade vaccine headlines, and although a ‘silver bullet’ vaccine is unlikely in the near term, expedited review processes in some countries (e.g. China and Russia) could present upside surprises as the year concludes,” Citigroup strategists wrote in a separate note.

Speaking on EM: In Praise of Inflation Expectations (Podcast)

Political risk still clouds sentiment in the Eastern Europe, Middle East and Africa region. In Eastern Europe, investors will watch Belarus, where President Alexander Lukashenko faces protests after a disputed election. While Vladimir Putin publicly supports Lukashenko, Russia’s president has problems of his own after being accused of orchestrating the near-fatal poisoning of an opposition leader.

In Africa, regional leaders are pressing their demand for the reinstatement of Mali President Boubacar Keita, who was deposed in a military coup last week. France and the United Nations, wary of the impact the coup may have on a Western-backed counter-insurgency effort in the country, appealed for calm and urged soldiers who detained Keita to free him.

The Bank of Korea meets on Thursday. Bloomberg Economics and unanimous consensus expect policy to remain on hold, with rates close to the effective lower bound

Korea’s 10-year yield has crept up since Monday last week, although this might be hard to sustain if the country is forced to adopt tighter social distancingRead: Korea Virus Wave Disrupts Recovery as Stronger Measures EyedHungary’s central bank will probably leave its benchmark rate unchanged at 0.6% on Tuesday, according to the median estimate in a Bloomberg survey. Policy makers lowered the rate by 15 basis points last month

In Brazil, investor sentiment will probably be driven by debates on the post-Covid fiscal adjustment. Last week, Brazil’s lower house maintained a freeze on public sector wages that had been unexpectedly voted down by the senate, a dramatic episode that revealed cracks in President Jair Bolsonaro’s congressional base.A mid-August consumer price inflation reading will probably flag an uptick stoked by rising food prices. July current account data, to be released on Tuesday, is expected to show an $8 billion surplus, according to a Bloomberg survey of economistsOn Friday, Brazilian unemployment figures may show an increase in July as joblessness spread

Argentine foreign-law bondholders who accept the nation’s debt offer and tender an exchnage before Friday will be eligible for additional consideration on accrued interest and will have greater ability to select the new bonds receivedArgentina’s Exchange Bondholder group will exchange a total $4.8 billion of bonds on or before Aug. 24The nation needs to come to an agreement to renegotiate its debt with the International Monetary Fund and push forward with an economic planEcuador, meantime, extended its deadline to settle its debt restructuring offer with bondholders until Sept. 1 from Aug. 20

Thailand reports July trade data on Monday. The trade balance has improved significantly since the pandemic hit, but that’s been dwarfed by the evaporation of tourist receiptsManufacturing numbers are due anytime from TuesdayThe baht was the worst-performing currency in Asia last week as the government mulls extending a state of emergency and Bangkok witnesses the largest pro-Democracy protests since the 2014 coupTaiwan reports July industrial production on Monday, which is expected to slow from the rapid pace of the previous monthPoland presents M3 money supply data for July on Monday. On Tuesday, the statistics office presents unemployment data for July and 2Q, while the central bank’s MPC holds a non-policy sitting, followed on Thursday with minutes from its July meetingSouth Korea’s consumer confidence for August will be reported on Tuesday. It will be interesting to see if the recent spike in local Covid cases has dented sentiment –- confidence numbers having sharply rebounded from the April lowsThe September manufacturing business survey follows on Wednesday

Mexico’s bi-weekly reading of consumer price inflation on Monday will probably flag an increase, adding to evidence of short-term pressure on prices, according to Bloomberg Intelligence. Minutes from Banxico’s August meeting will be closely watched for clues about future easing

A final reading of Mexican second-quarter GDP growth is expected to show an 18.9% contraction, according to economists surveyed by BloombergThough consumer inflation in South Africa is seen accelerating in July, the rate remained below the central bank’s 3%-6% target range, data may show Wednesday, according to the median estimate in a Bloomberg surveyChina’s July industrial profits will be released on Thursday. The figures have shown a remarkable bounce despite the Covid-19 shockChinese stocks closed the week almost unchanged after enduring intra-week volatilityMalaysia will report July trade data on FridayThe ringgit was the second-strongest performer in EM Asia last week, after the yuanChile’s unemployment rate, to be posted on Friday, will probably climb to 11.2% in July from 7.5% a year earlier, marking a seventh monthly increase, according to Bloomberg IntelligenceNigeria’s economy probably contracted 3.6% in the second quarter after expanding 1.9% in the first, according to the median estimate in a Bloomberg survey