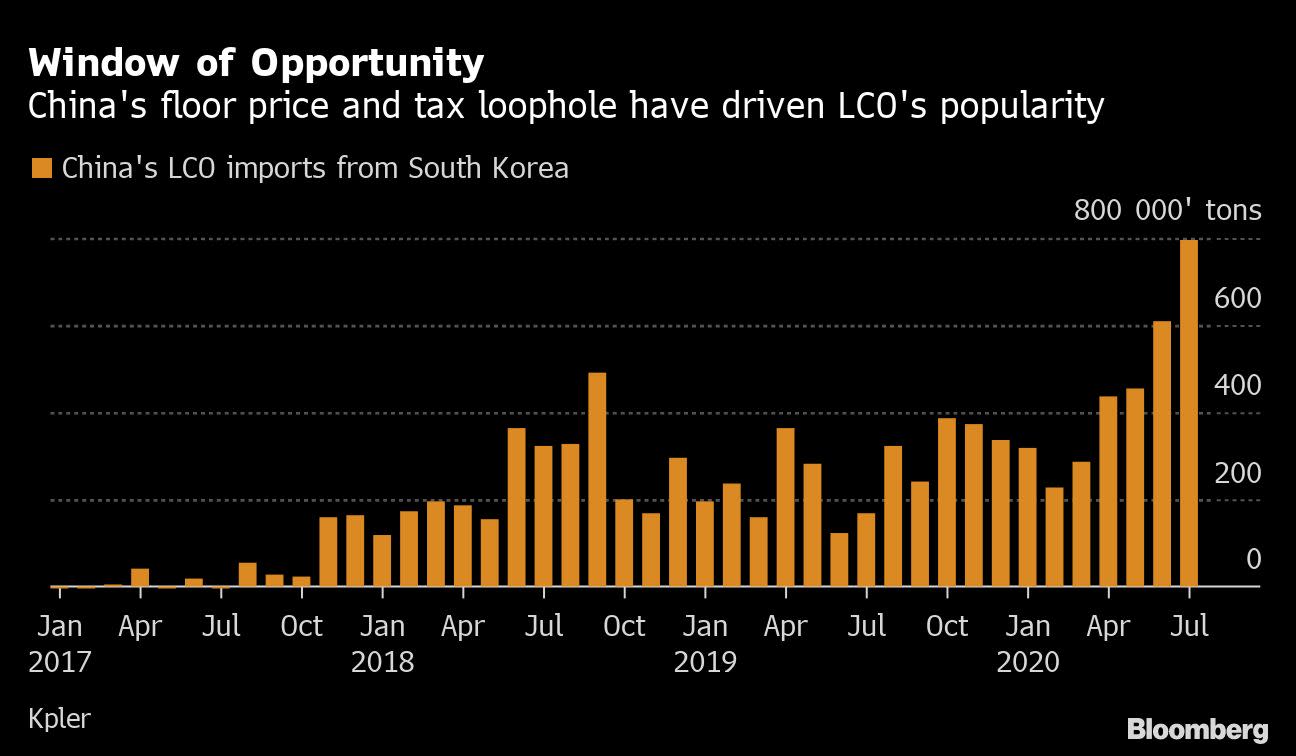 A flotilla of tankers plying the waters between China and South Korea has been hauling unusually large volumes of a lesser-known fuel called light-cycle oil — or LCO — to Asia’s biggest crude consumer.

Almost 800,000 tons of LCO arrived in China from its neighbor in July, the most in at least three years and more than twice the monthly average in the first half, data intelligence firm Kpler said. The flurry of activity, which looks to be accelerating this month, is being driven by both pull and push factors for LCO, a low-quality petroleum product that’s blended into diesel and fuel oil.

Chinese diesel demand recovered as the economy emerged from virus lockdowns and the interest in Korean LCO was heightened as it was cheaper than locally-produced fuels that weren’t allowed to drop below the equivalent of $40-a-barrel crude due to government policy. A tax loophole that exempts imported LCO from hefty duties on finished fuels, on the grounds that it’s also a petrochemical feedstock, also added to its allure.

South Korean refiners, meanwhile, opted to produce more LCO as margins were better than for other fuels in July, said several traders who asked not to be identified as they’re not authorized to speak publicly.

In Singapore, diesel crack spreads were less than half of their five-year seasonal average last month, with complex processors struggling to turn a profit. Earlier this month, South Korean shipments for loading in September traded at a premium of $3 to $6 a barrel over gasoil’s benchmark price, traders said.

“Chinese refiners are riding on the arbitrage to import light-cycle oil for blending to gasoil and selling it into the domestic market with a margin uplift,” said Serena Huang, a senior analyst at market analytics firm Vortexa Ltd. “This comes as a delight for South Korea refiners, who are getting higher margins in selling light cycle oil to Chinese refiners than exporting gasoil in the regional market.”

South Korean LCO exports to China are estimated at 547,000 tons so far this month, according to Kpler, compared with an average of about 390,000 tons in the first six months of the year. PetroChina and Sinochem were among the top buyers of July shipments, the data intelligence firm said.

Chinese LCO purchases are likely to remain high this month as independent refiners use up their government-issued quotas for crude oil imports, increasing their appetite for the diesel blendstock, said Yang Xia, an analyst at industry consultant SCI99.

The rally in global oil prices, however, and a plateauing in China’s energy demand recovery may make the high volumes more difficult to sustain in the coming months. With Brent now trading at around $45 a barrel, LCO isn’t as attractive compared with locally-produced diesel.

Chinese LCO demand was supported by the early recovery in diesel demand as well as the floor-price mechanism that kept local prices of the fuel artificially high, said Fenglei Shi, an analyst at IHS Markit. “We don’t think the recent high LCO shipments to China will be sustainable” as those advantages are being eroded, she said.