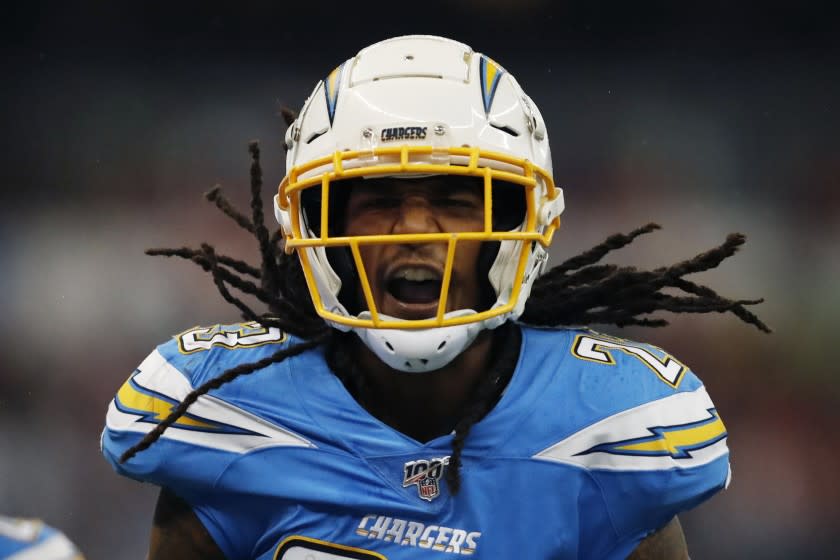 Coach Anthony Lynn credited Jenkins for playing at an “elite” level at one point and then, on a recent podcast, said Jenkins finished the season among the league’s top five at the position.

A fourth-round pick out of Miami in 2017, Jenkins promised Thursday that he isn’t done climbing.

To aid in his continued ascension, Jenkins said he spent the offseason adjusting his diet, and eliminating fried foods, pasta and rice. He said he dropped his body fat percentage into single digits.

Not that it was easy, particularly for someone born and raised in Florida.

“I’m a Southern guy,” Jenkins said. “So, any time you threw some rice with gravy in front of my face, it was over with. That was going down.”

Defensive coordinator Gus Bradley has suggested the Chargers could increase Jenkins’ responsibilities this season, positioning him at times closer to the line of scrimmage in part to take advantage of his skill set.

Bradley said the adjustment, which would happen only in certain sub packages, also would allow Jenkins to combat the repetitive nature of backpedaling on every snap.

“The biggest battle he has to fight back there is getting bored, just doing the same thing over and over again,” Bradley said. “It can get monotonous. We’re trying to do some different things with him just to keep him on edge.”

Said Jenkins: “It can get, I wouldn’t say boring sometimes, but boring sometimes. At the end of the day, you can’t get bored with it because you got some elite players in this league …

“I’m excited about it, just getting to move out of the post, that stationary post position. I should be able to show more of my ability. It will be cool to see how it evolves.”

Melvin Ingram rejoined the Chargers one day after being absent from the practice field.

The three-time Pro Bowl defensive end was in pads and participated in his first full-squad workout of training camp.

Before his absence, Ingram had been with his teammates and involved in meetings and walk-throughs but did not practice for undisclosed reasons related to his contract.

He is entering the final season of a four-year, $64-million deal signed in June of 2017.

Lynn has refused to offer details on the situation, repeatedly calling it “company business.” Attempts to reach Ingram’s agent have been unsuccessful.

“It’s always fun having Melvin out here,” tight end Hunter Henry said. “He’s a tremendous player, a leader on this team. He’s been around for a long time. … Any time you get him out here, the energy goes up.”

Henry will play this season on a franchise tag that brings with it a $10.6-million salary. He is eligible for free agency again in 2021, and the Chargers could franchise tag him a second time.

Whatever happens, Henry is certain to enjoy a sizable financial gain if he can have a healthy and productive season.

“I love it, man, super excited for those guys,” Henry said. “They definitely deserve it, and I think our position deserves it. … I feel like we were very undervalued compared to a lot of other positions. It’s good to see the market change a little bit.”

The biggest knock against Henry has been health. He missed all of the 2018 regular season because of a torn ACL and was limited in 12 starts a year ago because of a knee injury.

2020-08-21
Previous Post: Need money? Too bad you’re not an airport. You could get gobs of cash from the feds
Next Post: Post Office delays could skew early election results towards Trump