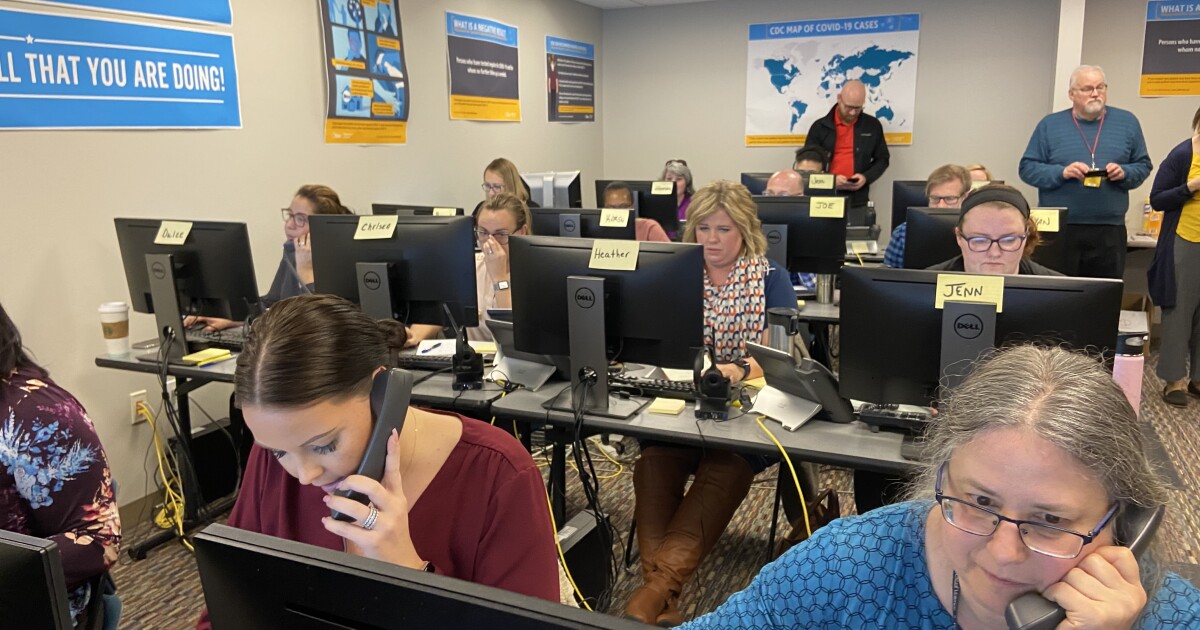 The Rev. Deborah Bowsher looked around the empty halls of her Zanesville church and saw an opportunity.

“While the Red Cross has been finding it quite difficult to have blood drives because all the businesses and schools have said, ‘No, you can’t do that in our premises,’ we’re an empty building most of the time, and we’ve opened our doors,” Bowsher said.

The novel coronavirus threw the world into disarray in 2020. Whole states shut down, people were forced to quarantine or shelter in place, economies ground to a halt and more than 200,000 American lives have been lost. But amid the chaos and the confusion, Ohioans have found ways to innovate.

The church represents both the tension and the innovation.

Bowsher watched as the debate on whether to wear a face mask divided her congregation.

“Trying to keep people together as a community is tough,” she said. “We have people on both sides of that argument staying away from church because of the people on the other side.”

But meanwhile, the church found a way to serve the community with the blood drives.

“What a great relationship has been built with them as they have welcomed donors,” she said. “They are exceeding their goals every drive, and there’s at least one a week here. You know, there have been some silver linings on this madness.”

Voters who spoke with Your Voice Ohio, a project that connects journalists with Ohioans from all walks of life, shared stories about starting businesses; finding creative ways to keep their favorite restaurants and movie theaters afloat; continuing their education in the new normal; and discovering ways to help their communities. It hasn’t been easy, they said. But these small shifts and big bursts of inspiration have given them hope.

When restaurants, jewelry stores, and beauty salons shut their doors, they also shuttered their marketing campaigns.

“Everything shut down for me as a video content creator,” said J.T. Thomas, a professional videographer who lives near Cleveland. “This is usually my busy season.”

So Thomas did what he always does; he found another opportunity.

“I had an associate in San Francisco throw me businesses editing real estate videos. Several projects going until guess what happened … ,” Thomas said. “The wildfires just shut everything down.”

Thomas pivoted again, investing in technology that would let him produce shows online.

“I was already doing videos, but I wasn’t doing it online. I had clients,” Thomas said. “The lightbulb went off and said everyone is doing shows online consistently, so that’s where I’m going now. “

Parents like Priya Kumar of Maineville near Cincinnati worry about both the safety and ongoing affordability of child care.

“I still cannot get myself to send the 4-year-old back,” she said.

But retired educator Vicky Simpson was able to answer a similar need for her Toledo-area family. She put away her travel clothes and dusted off her teaching gear to be a solution.

“My grandson will be entering kindergarten, so he and another one of his classmates will be going to what he calls ‘gram school’ at the kitchen table,” Simpson said.

She had won a vacation on Wheel of Fortune before the pandemic. Those plans, she said, are on indefinite hold. Instead, she’s spending her evenings cutting out shapes and letters for her makeshift classroom.

Simpson wasn’t the only Ohio voter whose life shifted around education.

Youngstown State University student Mi’a Toomer planned on working during the summer, but she has high-risk family members and didn’t want to expose herself once COVID-19 hit Ohio. Toomer replaced her initial plans with 18 credit hours of classes and a remote internship.

“I actually am graduating a year early,” Toomer said.

And Dominic Bunn, who graduated from college in the spring, decided to go onto graduate school at Case Western Reserve University instead of entering the workforce. That’s a common solution during a recession when jobs are scarce – stay in school.

“COVID has changed my plans drastically,” Bunns said. “My original plan was to get a job in a lab somewhere, probably in a hospital and work for a few years and then go get a PhD. But when I came home, everywhere was on a hiring freeze for an unlimited amount of time.”

Gladys Pope of the Cincinnati area had to juggle remote education for two children, one in high school and one home from college, and meanwhile keep herself occupied as a secretary at a closed elementary school.

She was in charge of supplies, which were no longer needed. Instead she found herself working from home but helping school families navigate the internet, file for unemployment, and find other help.

“I do a lot of community work, and I see how people’s lives are changed,” Pope said, referring to when people have what they need, including living wages, affordable housing and grocery money.

One after another, Your Voice Ohio participants expressed concern for small business owners.

In one small community, the family-run movie theater sold popcorn on the sidewalk on weekends and was able to raise their rent money, one participant said.

Richard Cornelius of Hamilton said he’s fortunate. He has no children and has saved some money. He worries for families with children who need child care, and he worries for small businesses that closed and are trying to figure out how to re-open.

To help those businesses, “I bought five $20 gift certificates. It’s like a loan. I’m trying to help out family-owned restaurants,” Cornelius said.

Some said they’ve seen dangers in connecting health care to a fulltime job, especially when the loss of a work occurs during a health crisis. Worrying about healthcare affects the ability to be creative in finding new work.

“You’re expected to go back to work, risk your life, pay your bills, and you can’t even get health care,” said one displaced worker who was called back to her job on a benefitless part-time basis. She said she wants to go back to work.

A sense of hope

Spencer Fritz, a college student in the Dayton area, said the forced changes create opportunity to think creatively. “I would like to see a lot of new ideas when it comes to our economy … This leaves an open door on how we can improve your workforce, our employment, being able to choose between college and trade school.”

“The community has really come together,” Fritz said. “I am impressed at how many people were trying to live more active healthy lifestyles. It’s such a good thing for our communities, when people go out for walks, become even more outdoorsy.”

Ashley Francois of Columbus said she’s not very hopeful, but nonetheless, “What gives me hope is that people legitimately care about other people. The pandemic has made a lot of people realize how you see something as simple as wearing a mask can help other people.”

“What leapt into my mind, I am finding hope in our young people,” she said. “I was privileged to work with five high school people, and during the course of our conversations they said we needed to help homeless during this time of crisis. They came up with the idea of putting together toiletry kits for the homeless shelters. We reached out to a couple corporations, received donations from them for about 250 kits for the homeless shelter. They’re going to lead the country.”

Anna Staver is a reporter for The Columbus Dispatch covering the statehouse and politics for her newspaper and the Gannett Ohio newspaper group. She can be emailed at [email protected]

Want to volunteer for a future dialogue and receive $125 for two hours? Register at the Your Voice Ohio Election 2020 website.

About this project: This is one in a series of stories on issues Ohioans say are most important in this election year. More than 50 news outlets are collaborating in the project under the umbrella of Your Voice Ohio, the nation’s largest sustained, statewide news media collaborative. In five years, Your Voice Ohio has brought more than 100 journalists together with more than 1,300 Ohioans for discussions on addiction, the economy and elections. The project is funded by the John S. and James L. Knight Foundation, the Democracy Fund and Facebook. The Jefferson Center for New Democratic Processes designs and facilitates the dialogues. Retired Akron Beacon Journal managing editor Doug Oplinger directs the media work and can be reached at [email protected]