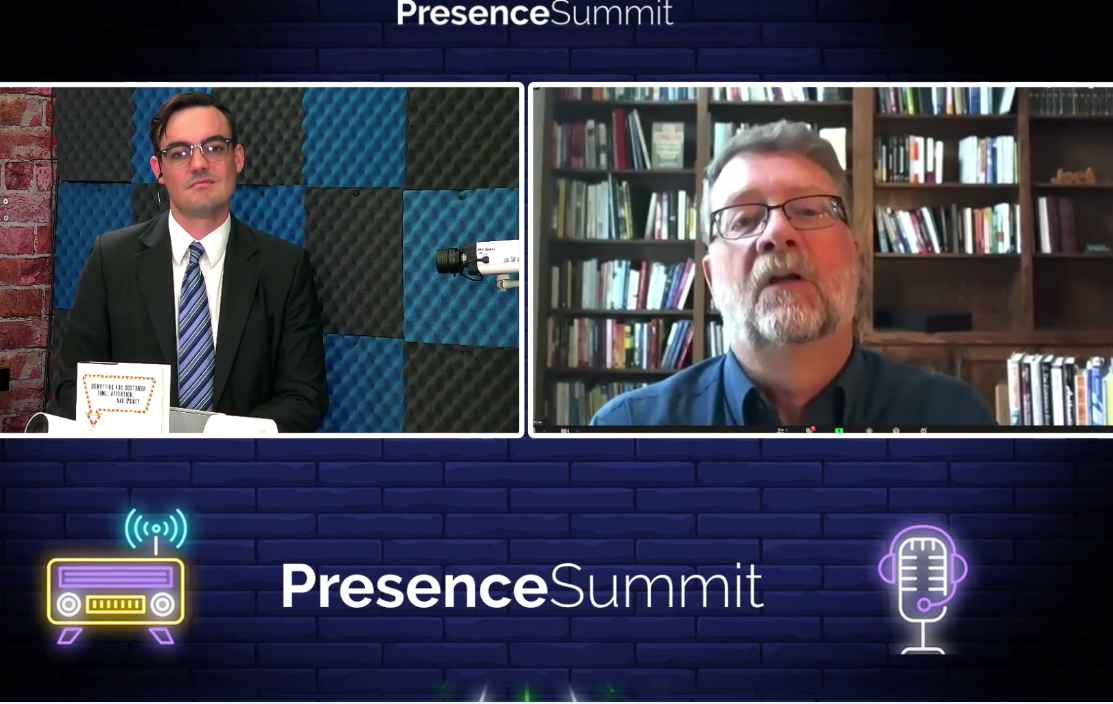 Can we find a business model for virtual events? Presence Summit provided some big clues

In my art of virtual events series, we dismantle the excuses event producers offer up to justify mediocre offerings.

Last time, I showed how interactivity is viable at larger events (Putting large-scale virtual events to the interactivity test – my dive into SaaS and Industry 4.0 speed networking with Hopin).

But there are questions not yet answered. One of the glaring ones: can virtual events be a business win?

Let’s face it – digital disruption is better at demolishing older business models than replacing them with new ones. That second part is on us. The pandemic exposed the flaws in all-digital events, much faster than vendors could respond. We’ll never be able to charge attendees for technical difficulties, and dismally passive experiences.

Up until recently, I’ve seen few signs of business model life. As one chagrined event manager told me:

Our attendees don’t feel like paying for recorded videos.

That’s not entirely fair; I’m sure some B2B niches would support paying for specialized event recordings – training videos if you will. But the proliferation of content from free events piles up. Wallets are tight; you can’t charge for yawns.

Recently an event jolted my thinking. The Presence Summit, an interactive day for digital broadcasting enthusiasts, included premium event features that struck me as the beginnings of a truly imaginative virtual event – maybe even an “experience.” The kind of experience attendees might love enough to pay for. No coincidence, then, that Joe Pine, author of the landmark book The Experience Economy, was one of the guest keynotes.

This event warranted follow up. Soon I was on a Zoom call with Paul Richards, Chief Streaming Officer at PTZOptics. That job title is no surprise; Richards was HD streaming from the PTZOptics studio throughout the Present Summit:

What I didn’t know: Richards is also the author of The Virtual Ticket: How to Host Private Live Streams & Virtual Events. Richards was urging us to make virtual events great before the pandemic forced the issue. But don’t take my word for it. Have you seen this type of feedback on virtual events before?

The Presence Summit combined streaming chat, group breakouts and interview sets via the PTZOptics studio. From the press release:

Concepted by the brain trust at PTZ Optics and HuddleCamHD, in partnership with Starin, a Midwich Group company, and supported by Zoom, the live streamed, all-virtual event is for anyone who has found video collaboration and conferencing a critical aspect of their daily lives in the novel world.

1. They expanded their reach by streaming sessions on YouTube, along with an integrated streaming chat:

Note how the chat might include critical comments running right alongside the speakers, something most event producers are terrified of – but that’s the real meat for attendees, not to mention for product teams open to improvement.

“What I can’t miss is these live discussions”

2. The Presence Summit included a “pro track” that ran simultaneously alongside public sessions. The professional development track was a Zoom-based experience that gave paid attendees unique access to the speakers. After speakers like Pine and Doman finished their sessions, they rolled into the pro track Zoom rooms for informal discussions.

On the pro track, the diverse speaker lineup interacted with both attendees and fellow speakers. I’ve never seen guest keynote speakers mixing it up in the same group together, hashing their differences, while attendees peppered them with questions. Smaller group breakouts added to the mix.

As a media member, I had access to the pro track. Pleasant surprise: the Presence Summit never shut down the pro track breakout discussions – not even during their own keynotes. Scary perhaps, but true – that’s real event innovation. How many times at physical trade shows have we all been interrupted and herded into multi-hour, overscripted keynotes, while the rest of the event shut down? Why stay in breakouts all day? One attendee said:

I can catch the replays anytime. What I can’t miss is these live discussions.

Bingo. And with that, the semblance of a business model jumped into focus. On the post-event call, Richards told me they’ve been building towards this for a while:

I’m very bullish on virtual events… I’ve been very surprised at the lack of preparedness all across the board.

Sounds like Richards went to some of the same yawners I did:

I’m not going to go into each one and what they could have done better. But you know, I was seeing that way before COVID-19.

I’ve been in the streaming business for about eight years. At the National Association of Broadcasters Show in Las Vegas every year, it would surprise me that they would spend hundreds of thousands of dollars on television studios, news sets and everything, yet they wouldn’t live stream it to Facebook… It’s such a disconnect, in my opinion.

To make his case, Richards wrote his virtual events book. But now – change is in the air.

I’ve been like watching this whole industry and waiting for it to flip. And COVID has really been an accelerant in that regard, in many ways.

That means event producers need to up their game:

The most valuable thing today is attention. It’s so hard to get people’s attention. And if you do get their attention, you certainly don’t want to have egg on your face… People are so used to meeting in person.  Obviously, we wanted to find a way to reinvent ourselves and our events. So we have a studio here.

Yes, reliable/high quality production values definitely help. As you may have seen from the chat excerpt above, the Presence Summit attendees were abuzz over NDI (Network Device Interface), a royalty-free software standard from NewTek, which enables HD video over computer networks with high quality and low latency. PTZOptics has skin in this game, with a host of NDI cameras, as well as IoS, Android and desktop apps to help those with production ambitions (PTZOptics is a pan-tilt-zoom camera manufacturer).

Production values help – and PTZOptics has an obvious advantage there – but in my view, it’s the creative event design that sets this team apart. Richards says we can blame that on PTZOptics management:

They give me a lot of leeway with the direction of the marketing that I do for the company. And we decided to create a brand called the StreamGeeks. And so with that, about two and a half years ago, we literally moved out of the headquarters of PTZOptics, and created our own office just for marketing. It has a really nice studio, and we were like, “Look guys, let’s invest in this.”

It took a while, but as good content tends to do, it eventually took off:

So I’ve been streaming a live show for PTZOptics for about five years. The first year there were no viewers, and then with a second year, it started to get a little more. The third year, we were making so many videos that started to get comments and subscribers. The community, especially on Facebook, really started to grow. The live streaming community is tight knit, and it’s exploding right now.

Towards a virtual event business model

One problem with the virtual event business model: we don’t have the same agendas. A successful event by one criteria is a failure by another. As I said in my last piece, it’s not clear that the online exhibit hall model is working. Richards thinks the virtual exhibit hall will have to be discarded in favor of integrating sponsors into the content flow. He could be right, but integrating sponsors into content tracks comes with its own set of risks.

Most tech event producers are not in the pure event business anyhow. Typically, their events are not intended to exceed software revenues. But the lead gen and sales impact of an on-the-ground event can be powerful – not to mention letting prospects and customers experience the vitality of your community.

You can accomplish far more of that virtually than most people think – but not if you insist on a stale/passive format of keynotes and panels. On the ground, we can always leave the keynote and have a quiet conversation instead. Virtually, we’ll just leave the bland keynote – and we might not return.

So for PZOptics, I’d argue that events like the Presence Summit are more of an example of outstanding content marketing than an attempt to build a whole new business model. Building an opt-in community around your brand is the highest level of content marketing – and a way to power all kinds of business offerings.

Still, it bears asking: “Would our attendees pay for this virtual event?” Judging by the slew of unimaginative/overwrought events this year, I’d say the answer for 99 percent of those is no. I’d like to think that’s disconcerting enough for vendors to reconsider.

The “pro track” concept may confuse vendors who decide this means offering a day of specialized training. Nothing wrong with that – I’m sure project teams would scoop that up. But for those vendors who aren’t ready to take the risk on an interactive event for all attendees, despite my exhortations, the Presence Summit “pro track” model points the way towards bringing in more interactivity – and working on interactivity-at-scale later.

For his part, Richards will be ready to bring in online options even when on-the-ground events return. That’s another topic, but I agree that we should never go back to the way it was. There are too many reasons to virtually include diverse constituents who can’t get there on the ground. And no, I’m not talking about streaming your keynotes, please, no one is excited about your streamed keynotes. This is about opening up a big portion of the conference. The business model possibilities are evident there, when that time comes.

For now, the business model discussion is early days. What’s not early days is asking: why are vendors clinging to brandcasting when they can create a virtual live experience not to be missed?

This piece is part of my ongoing diginomica series, The art of virtual events – from mediocrity to excellence.

2020-08-16
Previous Post: Hundreds of NH business have closed since start of pandemic
Next Post: ‘Every person in Tulsa has a story about this bridge’: Tulsans offered one last photo opportunity on age-old pedestrian bridge | Latest Headlines