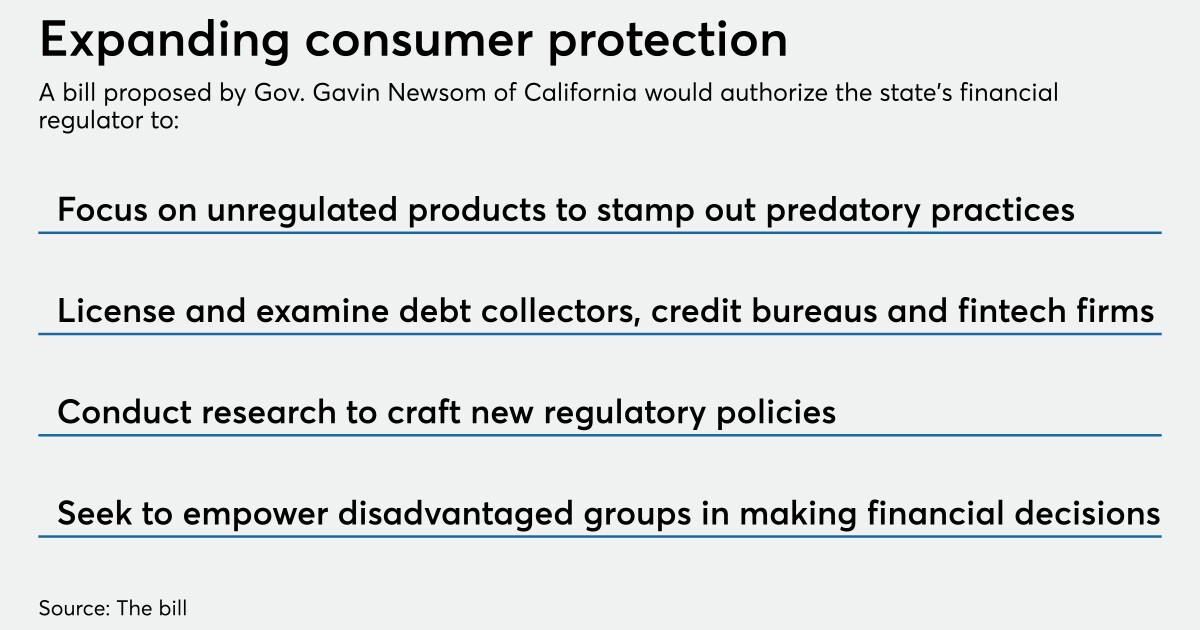 California’s ‘mini-CFPB’ plan is back in play

A California bill that would create a powerful state agency fashioned after the federal Consumer Financial Protection Bureau has made a comeback with the support of small businesses and fintech firms that want expanded protections during the coronavirus pandemic.

But most financial institutions are trying to stop the bill because it would expand the state’s enforcement powers, potentially increasing fines and compliance costs.

Gov. Gavin Newsom’s plan to expand oversight of all financial services companies in California was inserted back into a final budget bill that legislators must pass by Aug. 31. The plan, which some are calling a “mini-CFPB,” initially had been dropped from a budget bill in June.

The proposal would replace the state’s existing Department of Business Oversight with a new agency called the Department of Financial Protection and Innovation, equipped with powers resembling those of the CFPB.

The plan would, among other things, expand consumer protections to small-business borrowers that have complained of being targeted by unregulated, high-cost lenders.

But nearly a dozen bank and financial services trade groups are making a last-ditch effort to kill the proposal. Industry representatives have stepped up their engagement with lawmakers and sent letters to state officials. Financial firms are particularly opposed to a provision in the bill expanding enforcement and imposing administrative penalties for “unfair, deceptive or abusive acts or practices,” in part because the federal government already enforces a ban on so-called UDAAPs.

“The state is imposing new enforcement requirements that lack clarity and seem to be redundant,” said Scott Govenar, a lobbyist for the California Financial Services Association, which represents auto lenders.

But the plan has garnered the support of 47 fintech, small business and consumer advocacy groups that want a slew of unregulated industries — debt collectors, credit reporting agencies and merchant cash advance lenders that market to small businesses — to be registered and regulated.

“It hurts borrowers and lenders alike when responsible companies must compete against actors who find advantage in unfair and deceptive acts,” said Kim Wilson, director of policy and advocacy at the Responsible Business Lending Coalition, which represents fintech firms including LendingClub and Funding Circle as well as nonprofit community development financial institutions.

California offers a window into the legislative process by which other states might try to revamp consumer protection. After the Trump administration implemented a deregulatory agenda and the CFPB pulled back on enforcement efforts, several states including New York, Pennsylvania, New Jersey, Delaware and Maryland responded by increasing oversight.

As the state’s main financial regulator, DBO currently operates with a budget of $108 million and 615 employees who oversee and supervise 360,000 individuals and businesses. If the legislative plan passes, the department would be revamped and its budget would rise incrementally over three years by roughly $19.3 million and 90 additional employees, according to the state Senate budget committee.

However, even though Democrats hold a supermajority in the state legislature, it is unclear whether moderates are willing to approve the plan. Some suggest Newsom is skirting the legislative process by attaching the proposal to the budget bill. Others argue consumer protections are needed now more than ever because of the coronavirus pandemic.

“This is probably the most significant piece of policy we could be doing to benefit California consumers right now, and if we lose this opportunity, it’s going to become harder and harder and harder to pass,” Assemblyman Mark Stone, D-Monterey Bay, said at an Assembly hearing earlier this month.

Still, bank, credit union, auto and payday lender trade groups have drawn a line in the sand. They want existing state licensees and entities operating with a federal license to be completely exempt from the proposed California Consumer Financial Protection Law.

“[The California Credit Union League] believes the governor’s proposal should focus on the unregistered and unregulated entities in the state and leave current licenses out,” Robert Wilson, the group’s vice president of government affairs, said in a statement.

Financial institutions are worried about inconsistencies between state and federal definitions of UDAAP. While federal regulations currently define “abusive” practices, the California bill would include that term but not define it.

The state already has UDAAP authority over current licensees under the Dodd-Frank Act, and under some state licensing laws. The bill would adopt a UDAAP standard specific to California, which would apply to those licensees as well as to a new subset of companies that would have to get registered under the bill. The legislation would result in an estimated 9,000 new registrants.

In a letter to DBO Commissioner Manny Alvarez, financial trade groups said they object to giving the new department “broad investigatory and subpoena powers with a nearly unlimited scope of records and information that may be requested before ever alleging any wrongdoing.”

“We believe these powers ought to be limited and subject to due process,” the financial trade groups said in a July letter.

Alvarez, a former general counsel at the fintech startup Affirm and a former CFPB enforcement attorney, told lawmakers that the department is prepared to testify annually to the legislature and produce reports on the department’s work.

“This financial crisis threatens to have a long tail, and as we are learning, problems with a long tail require decisive action early on,” Alvarez said at the Assembly committee hearing earlier this month.

Former CFPB Director Richard Cordray, one of the high-profile advocates of the plan, said the proposal would fill a gap in federal law by protecting small businesses, family farms and non-profits from predatory lenders. He countered the criticism of UDAAP by noting that Dodd-Frank envisioned that states would adopt their own versions of the federal law.

“California wants to be able to establish UDAAP in its own law,” Cordray said.

Even some traditional financial institutions say the bill is worthwhile.

Kat Taylor, co-founder of the $1 billion-asset Beneficial State Bank in Oakland, Calif., and the wife of Tom Steyer, the hedge fund billionaire and former presidential candidate, said tougher standards are needed to rein in bad actors.

“It is really hard to offer high-road banking products and compete against bait-and-switch fraudulent ones,” said Taylor, who is leading the small-business coalition that supports the plan. “California is the biggest market for financial services and auto loans, so it’s important how we regulate because it will have spillover effects on other states.”

But most financial firms have other concerns as well. They want to limit investigations by multiple agencies, including the state attorney general, and prevent overlapping or duplicative actions. They also object to the bill’s draft language that says the department could recover legal costs if it successfully sues a firm.

Some lawmakers that support the plan said they needed more time to debate the issues. Many key details of the implementation of the department’s responsibilities would not be written in the law but rather would be left to the agency to devise.

“The legislature may want to take more time to evaluate the proposal and could direct the department to reintroduce the proposal in next year’s legislative session and work on refining it,” Drew Soderborg, deputy legislative analyst in the Legislative Analyst’s Office, told lawmakers at the Assembly hearing.

Alvarez has urged lawmakers to take into account the effects of the COVID-19 pandemic on consumers small businesses coupled with the deregulatory environment in Washington.

“My fear is that Californians will go through the worst parts of this recession without important protections in place,” he said.

2020-08-18
Previous Post: Citi’s $900 Million Loan Blunder Heads to Regulators and Court
Next Post: Web of Things Over IoT and Its Applications