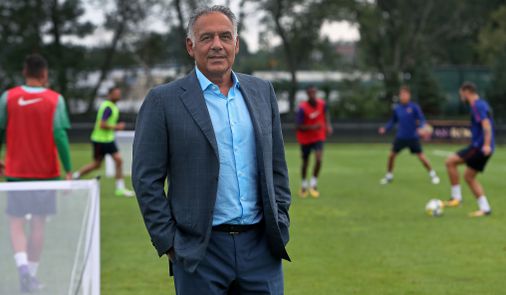 An investment group led by Boston businessman Jim Pallotta has sold its controlling stake in the AS Roma soccer team to a Texan billionaire.

The soccer team and its buyer, The Friedkin Group, announced that it completed the deal with Pallotta’s NEEP Roma Holding on Monday. The negotiations have been rumored since late 2019. The team confirmed a deal was struck on Aug. 5 that was valued at 591 million euros, or about $700 million. As part of the deal, Houston-based Friedkin will make an offer for the publicly held shares in the team, roughly equivalent to a 13-percent stake. (Forbes had estimated in 2019 that the Roma team was worth $622 million.)

New owner Dan Friedkin issued a statement saying he has developed an ambitious business plan with Roma chief executive Guido Fienga, and will “give him the support, guidance and means to deliver on that plan.”

Pallotta runs a Boston investment firm, Raptor Group. He has been a key investor in the team, nicknamed “Giallorossi” for its yellow and red colors, for nearly a decade, and he often spoke publicly on the team’s behalf.

“Like every Roma fan in the world, I truly hope The Friedkin Group can build on what we have done over the last eight years, transforming Roma into a truly international club, and take AS Roma to the next level,” Pallotta, also a co-owner of the Boston Celtics, said in a statement. “This is an incredibly special football club and I leave with many unforgettable memories.”

Several prominent business leaders with Boston ties will resign from Roma’s board of directors as a result of the sale, including Pallotta; Richard D’Amore, general partner of North Bridge Venture Partners; Paul Edgerley, senior advisor at Bain Capital; and Cam Neely, president of the Boston Bruins.

Pallotta and D’Amore had been part of a group of investors, led by Thomas DiBenedetto at the time, that acquired a majority stake in Roma in 2011, making it the first Italian soccer club to be owned by foreign investors. Pallotta took control of the club the following year.

Pallotta has been public about his frustrations with delays in getting a new stadium built, saying in 2017 that he was prepared to sell the club if local approvals for the project were not forthcoming. (The team currently shares the Stadio Olimpico with its local rival, Lazio.)

“We think there’s a huge opportunity for us to build a championship-caliber team with a stadium and an entertainment complex,” Pallotta said that year. “But if they can’t get the approval stuff in order then someone else is going to have to go through with it.”

Earlier this month, soccer journalist John Solano reported that Friedkin has met recently with a Czech real estate investor interested in acquiring land for the Stadio della Roma project, and ending the years-long wait for the stadium construction.