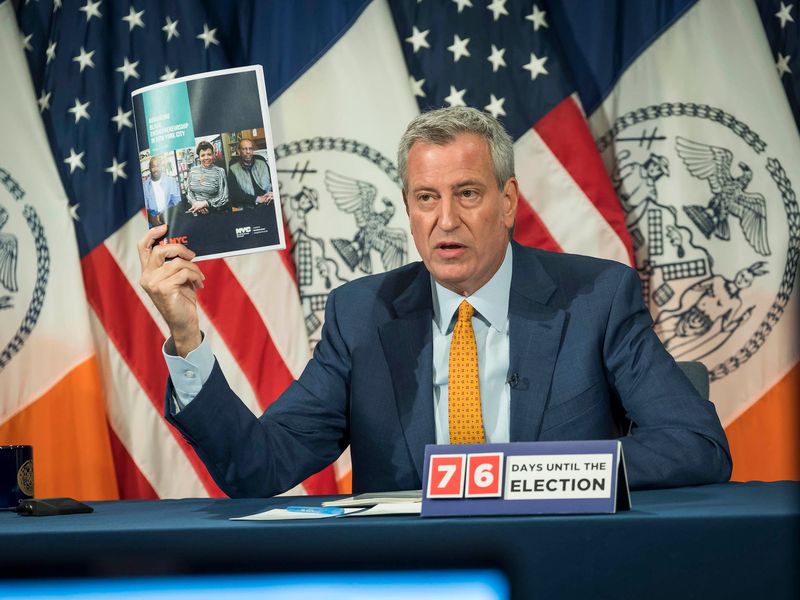 “Something’s wrong about that picture to say the least,” de Blasio said.

The mayor’s business inclusion plan immediately drew criticisms due to its vague nature and lack of hard funding numbers that will be allocated to Black businesses and entrepreneurs.

“One of the frustrations we consistently have there are a lot of press statements and programs and announcements but there are never specific dollar amounts,” said Rev. Reggie Bachus, president of the 400 Foundation, a consortium of Black religious leaders who promote economic development.

The de Blasio administration’s new plan focuses on three distinct lines of improvement that will use relationships with a trio of private firms in the banking industry.

The first hallmark of the plan is access to capital and increasing the ability of black business owners to enter into institutional equity markets. Goldman Sachs will be providing access to affordable financing and business education, but there was not dollar amount mentioned. Ernst & Young will offer 2,000 hours of free one-on-one consulting to Black business owners.

The second area is helping black entrepreneurs gain a greater foothold on the digital marketplace. Together with the SBS, Mastercard is creating a virtual storefront for Black entrepreneurs.

The city also said it will generate new sources of revenue through government contracts.

“There are always more ants than elephants, those well-known well branded organizations out there, but they don’t have the delivery system to get capital to those who are well positioned with community insights,” Bachus said. “We need dialogue and conversation and not one-sided directives.”

Other Black business leaders had much stronger criticisms.

“There’s doing something meaningful and real and then there’s the head fake. This looks more like a head fake to me,” said Craig Livingston, managing partner at Exact Capital development group.

As chairman of the New York Real Estate Chamber—the largest advocacy group for Black developers in the state—Livingston is part of the Black Business Collaborative that includes Greater Jamaica Development Corp., Full Spectrum New York, Bedford-Stuyvesant Restoration, and New York State Association Contractors—none of whom were consulted on the BE NYC initiative, he said.

“Who are these 1,500 folks they talked to? I have no idea,” he said. “What’s really concerning about that is when you’re talking about groups like the ones we mentioned, these groups represent companies at the top of the MWBE ecosystem.”

Livingston considered the lack of specifics on increasing access to equity capital for Black-owned businesses as particularly troublesome, especially considering the recent data on how large the disparities are.

“What percentage of the city budget is being directed to this?” Livingston asked. “It’s time to respond to black economic interest with numbers and dollars.”

At the press conference, SBS Commissioner Jonnel Doris admitted there’s not much the city can do in terms of hard dollar amounts without a federal rescue package from Washington.

“We need federal support,” Doris said. “Our small businesses in this city cannot make it without the federal government stepping in on a financial side and helping them.”