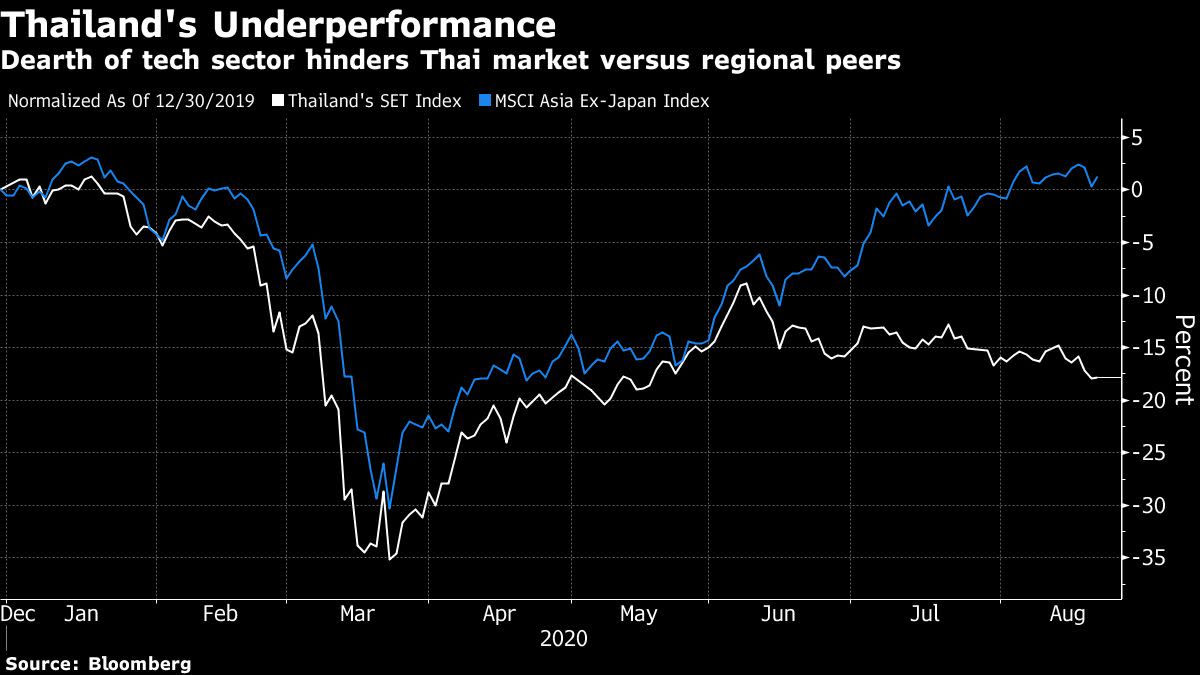 “Disruptions in the technology and digital industries will still be the major driving force in the post-pandemic world,” Srikanya Yathip, secretary-general of Government Pension Fund, said in an interview at her office Thursday. “Those sectors should deliver very good returns, which are easier to find in international markets than in Thailand.”

Srikanya this month was promoted to head of the state fund, which oversees the retirement savings for more than 1 million government employees. Her jobs before joining GPF included stints at private companies such as ad agency Chua Senko Pcl and TV Asahi, according to the fund’s website.

Southeast Asia’s second-biggest economy and other regional peers have lagged the global equity rally due to their underexposure to the tech industry, including online gaming, automation and e-commerce.

The 50 largest stocks in the 603-member SET Index account for 71% of total market value. Information and communication technology companies account for about a tenth of Thailand’s market capitalization, data compiled by Bloomberg show, compared with industry weightings of about a third for the S&P 500 Index and about a fourth of the MSCI Asia Pacific Index.

The gauge of Thai phone operators, game developers and other technology companies has dropped 13% this year compared with a 9.7% gain in the MSCI Asia Information Technology Index.

Srikanya’s plan to step up international investments is a continuation of the fund’s recent strategy. About 9.5% of total assets are now in foreign equities, almost double the 5.1% at the end of March, she said, without identifying specific holdings. The proportion of domestic shares is little changed this year at 4%, she said.

The fund has “positive” gains from its investments so far this year, which faced very “tough” investment climate, Srikanya said, without elaborating. It posted a return of 5.7% in 2019, compared with an average annual gain of 4.3% in the previous five years, according to its website.

Still, the investment team faces a challenge to generate higher returns because about 78% of GPF holdings are in local and overseas bonds, on which yields have slumped, she added.

The GPF will also step up its emphasis on environmental, social and governance practices when making investments under her leadership, she said. It will avoid companies and securities that don’t meet requisite ESG standards, she said.

2020-08-24
Previous Post: Corporate Bond and Banking & PSU Debt Funds: Safe options, but not all may fit your bill
Next Post: The Iranian immigrant who conquered online video tech