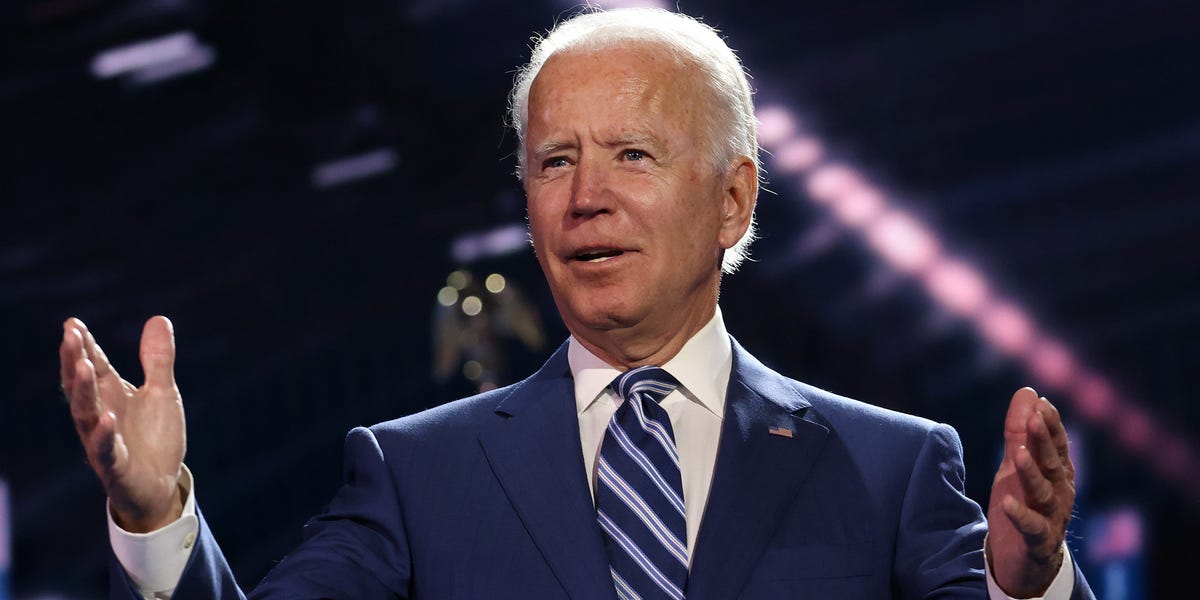 Joe Biden’s campaign is tapping into an informal army of policy wonks to suggest immediate economic changes that could go into effect on Day 1 and within the first 100 days of a Democratic administration if he ousts President Donald Trump in November, according to a pair of confidential documents obtained by Insider.

Among the requirements for the outside working groups drafting recommendations due to the Biden team by Labor Day is the inclusion of a rationale for any policy change and “why it requires action on Day One.” Biden’s team is also asking its advisers to include information about any Trump administration actions related to the specific issues they recommend movement on.

The groups working on policy ideas — divided into a series of committees and subpanels — have been shrouded in secrecy and are urged to keep their involvement with the campaign confidential. They’re tasked with advising on an array of issues, including a post-pandemic economic recovery,  banking and consumer protection, federal reserve policy, trade and manufacturing, and boosting small businesses. There are also groups focusing on racial equality and on poverty and mobility.

The groups of advisers are focusing on executive actions Biden can enact without action by Congress, according to a person familiar with their activities, and have also been advised to take into account fast-moving media accounts as they prioritize their policy recommendations.

There’s a college blue book vibe to the documents obtained by Insider: advisers’ notes must be contained to just two pages on a form with a header that reads “confidential and pre-decisional.”

Committee members are briefed once a week about their specific priorities, and once a month as a whole, according to a source familiar with their activities.

A lengthier document asks for suggestions of policy changes to be made by Day 100 of a potential Biden administration. It requests a priority level — high, medium, or low — along with an explanation for why the issue must be dealt with within the first 100 days.

Advisers must also include the costs associated with their suggested changes, the names of the federal agencies with jurisdiction over the issues, any possible barriers to implementation, work done on the issue by past administrations, and “relevant movement on the Hill related to policy.” The 100-day recommendations should be spelled out in no more than four pages.

If Biden wins, he would be under pressure to address a slew of issues that Democrats have been hard pressed to tackle with Trump in the White House, including racial justice, voting rights, climate change, gun safety, and more aggressively combating the coronavirus pandemic.

Enter the working groups, which are tasked with crafting recommendations based on their own expertise with the intention that their suggestions could make it up the food chain to the high command of the Biden campaign and a possible future Democratic administration.

Members of the different panels were described to Insider as “pointy-headed policy people, not campaign people.”

The inclusion of progressive voices in the working groups also shows Biden is making an effort to include perspectives outside of the traditional realm of Democratic policy advisers — at least on paper.

Liberals including Rep. Alexandria Ocasio-Cortez, Sen. Elizabeth Warren, and Sen. Bernie Sanders have made a strong showing at this week’s Democratic National Convention. But they will have plenty of work ahead if Biden wins as they try to exert pressure on a new president to enact some of their policy priorities in the face of record budget deficits, uncertainty around the trajectory of the pandemic and almost certain opposition from conservative Republicans.

Foreshadowing the potential battle lines ahead, Ocasio-Cortez in a Thursday tweet pushed back on assertions made to the Wall Street Journal by senior Biden adviser Ted Kaufman that a large increase in federal spending would be difficult to achieve next year if Democrats win the White House because “the pantry is going to be bare.”

“The pantry is absolutely not bare. We need massive investment in our country or it will fall apart. This is not a joke,” she tweeted.

Democrats acknowledge the working groups are also testing grounds for future Biden appointees who could be tapped to fill one of the several thousand job openings that come available with a new administration.

The Biden campaign said there are several hundred people in its working groups crafting recommendations. But the campaign added that those groups are not creating specific policies for it or directly advising Biden. It said the people are volunteering in their private capacities rather than as representatives of their company or clients. Federal lobbyists and foreign agents are prohibited from joining the groups.

Policy advisers have been urged to avoid talking to the press about their dealings with the Biden campaign, according to The New York Times, which wrote that participants are also not allowed to circulate emails from committee leaders or refer to “the candidate or to the campaign documents.”

The Biden campaign has indeed been extremely secretive about the former vice president’s inner circle of economic advisers. But Biden’s campaign has confirmed two key players: former White House economic adviser Jared Bernstein, a senior fellow at the Center on Budget and Policy Priorities, and economist Heather Boushey who is president and CEO of the Washington Center for Equitable Growth.

Bernstein did not immediately respond to requests for comment on his involvement in the campaign. A representative for Boushey referred questions to the Biden campaign.

“Donald Trump’s spent years favoring the wealthy over working Americans, and his abject failure on COVID-19 has left our economy in a ditch, so Vice President Biden has laid out a comprehensive plan to address these crises and build our economy back better,” Gwin said in a statement to Insider.

“To make that vision a reality, [the] vice president is listening to leading experts and policymakers — and he’s hearing from the working Americans who have been left behind by Trump’s economy — about how real investments in made-in-America manufacturing, clean energy, and infrastructure can help rebuild the middle class,” Gwin added.

Democrats have consistently hit on policy issues throughout their national convention. They highlighted Biden’s focus on health care and gun control during the opening two nights and on Wednesday the emphasis shifted to the US economy. Former President Barack Obama vowed Biden and Harris will “rescue the economy like Joe helped me do after the Great Recession.”

In his campaign, Biden has largely focused on restoring the economy in light of the pandemic that has left millions of people jobless and forced businesses across the country to shut down. In July, he released a key element of his economic plan that in part touts his plans for manufacturing, innovation, and creating new jobs.