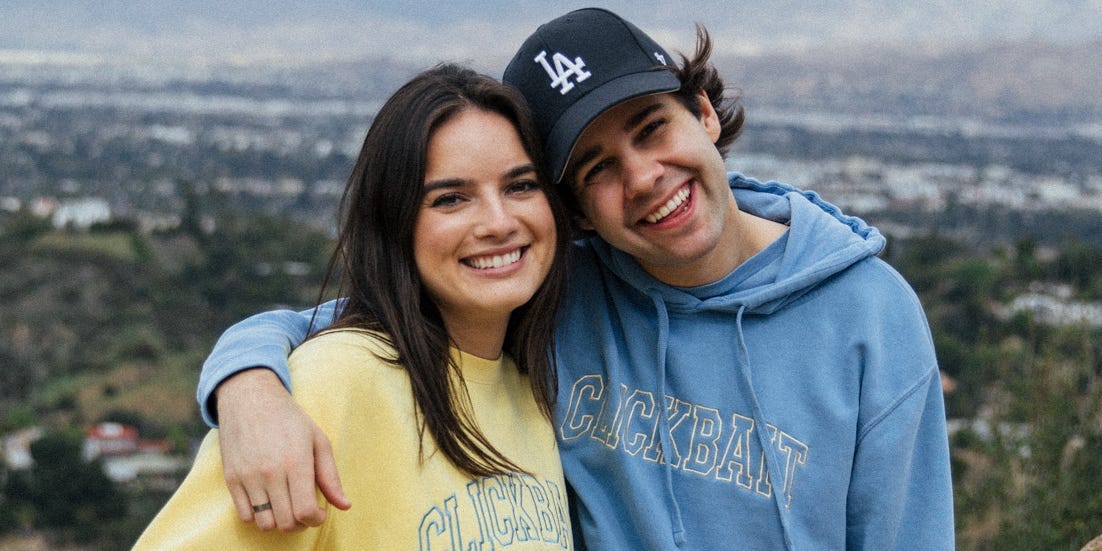 Behind the scenes working for David Dobrik with Natalie Noel Mariduena

Officially, Mariduena is an executive assistant of David Dobrik LLC, and when she’s not appearing in Dobrik’s vlogs or TikToks, she is working beside him to help scale the growing business.

Mariduena’s involvement started a few years ago when Dobrik, who is one of YouTube’s most popular creators with 18 million subscribers, asked her to come out to LA and help him out.

“I had one more semester of college I had to finish, and my parents would kill me if I just wasted all that money,” Mariduena told Business Insider. So instead of dropping out, she left Chicago in 2017 and flew out to LA to complete an internship with David Dobrik LLC for college credit.

“His business was growing significantly and he needed an extra hand,” she said. “And I was always kind of that sisterly, responsible figure.”

Since then, Mariduena and Dobrik have become celebrity-level influencers, with the media constantly speculating if they are dating (they aren’t), new TV projects with Discovery and Nickelodeon, and most recently, expanding into a new $9.5 million LA mansion.

“Although I was hesitant at first, I’m so happy I did make the decision to move out here and work with him,” Mariduena said of working with Dobrik. “It evolved from it being this internship for credits to this real role that I have in executing whatever business he’s in.”

‘David and I do everything together’

Even though Dobrik and his squad are massively popular online, those who aren’t tapped into the world of influencers may not understand their business.

“Even my parents,” Mariduena said. “They are still confused because there isn’t really a job description or proper title.”

“I definitely came into it with this perspective like, OK, I’m going to do this six-month internship and then I’ll move back to Chicago and keep living my life,” she continued. “I quickly found that wasn’t going to be the case and that I actually wanted to stay in California and working with David for a long period of time.”

Since then, Mariduena has become an influencer herself, with 4 million followers on Instagram, a manager of her own (she’s signed with Digital Brand Architects), brand deals, and even 215,000 followers on her closet account (a separate account some influencers make specifically for outfit pictures).

But she said that everything she does is a part of the larger team.

“As much as I have my own following and things like that, David and I do everything together and it’s not really so much me doing my own thing, as much as like there’s a lot of females who follow David and have followed me and attach to our storyline and this friendship,” she said.

When it comes to his videos, Dobrik is often the man behind the camera and he relies on his friends to help him create interesting content.

“Whenever he makes a decision there are like ten people involved,” she said. “I think that’s kind of what’s so important, and how we continue to work together as such a good team.”

A day in the life working for a YouTube star

Since the coronavirus pandemic hit the US, Dobrik has halted filming weekly videos for his YouTube channel. He hasn’t posted a video since April and he stopped his regular uploads in March.

Mariduena said they do want to get back into creating YouTube videos again. But for now, Dobrik is focused on his latest project, a TV show for Discovery, and filming content for TikTok (he recently became one of 19 recipients to get money from TikTok’s new creator fund.)

During the week, Mariduena is usually with Dobrik helping him on set or attending meetings. And in general, their schedule is a lot less exciting than what’s shown in his four-minute vlogs, she said.

“It’s a lot more mundane than people think,” she said. “It’s a lot of emails, calls, a lot of sitting around and scrolling through social media and seeing what people like. Especially during quarantine there are several times where we will just go back and watch the old vlogs and reminisce on how much fun we had and how we did it.”

Her “all-time favorite moment” was the day Dobrik married Lorraine Nash, who is the mom of Vlog Squad member Jason Nash. The marriage was a prank and lasted about a month. Dobrik filmed the wedding, which took place in Hawaii, and that video has 12 million views.

“They had a conversation that day and then later that night we were on a plane to Boston to propose to his mother,” Mariduena said. “It was so epic.”

Her second favorite experience was a brand trip with the video game company Electronic Arts.

“One of the most lavish vlogs that we did was we went to Miami with EA and they rented us a private plane and we went and picked up our friend in Chicago – there were cars, a party and the beach, a yacht, just the most epic vacation you could ever think of, and it was just so awesome because we could do it together,” she said. “Those are the best moments. When we are all taking trips together.”

Inside the business working with brands, building an app, and creating merchandise

There are a number of lucrative ways influencers have expanded their businesses, like working with brands on long-term partnerships and selling merchandise.

“I definitely did not understand – especially a few years ago – how influencers and social-media personalities were monetizing,” Mariduena said. “If you’re not in it, it’s really hard to understand.”

Last December, Dobrik’s business branched out into the app world by launching “David’s Disposable,” a photo app designed to mimic the experience of using a disposable camera. The app gained 2 million users in two months, and Mariduena is a part of the growing the team working to launch a new “more fleshed out” version called “Disposable 2.0” by the end of the year.

In March, Dobrik told The Wall Street Journal that custom merchandise from Fanjoy made up the majority of his income. The company helps him design, develop, and distribute a new collection of sweatshirts, T-shirts, and other branded items about once a month. Mariduena is in communication with Fanjoy on an almost daily basis helping with design concepts for future collections, Fanjoy CEO Chris Vaccarino told Business Insider.

“For me specifically, I love fashion and I love clothing,” Mariduena said. “That’s what translates into my relationship with Fanjoy, and why I’m so hands-on there is because I genuinely love it and think it’s so fun to see someone out that’s wearing a design that I came up with.”

Outside of merchandise, Dobrik’s business also runs on brand deals, and Mariduena said she’s helped a lot with those projects as well. Dobrik is known for putting his own spin on the deals he does, like using the brand’s money to surprise friends with gifts like a new Tesla, or by paying off their college tuition.

Mariduena said brands should understand and be receptive to influencer campaign tweaks or changes, because that is what’s going to make a campaign “instantly more successful.” She said some brands trusted them with that off the bat, and slowly more are starting to understand.

Overall, being successful online is “a lot of hard work and a little bit of luck,” Mariduena said.

“The No. 1 thing that I’ve learned working with David, and having the role that I do, is everything that he does is very quick, whether that’s the YouTube videos or when he has an idea he wants it executed very quickly,” she said. “A lot of the people that we partner with understand that about David, and how we get all these fun things done so quickly is that mutual understanding, and they trust that we are going to make something cool.”

Read more about Dobrik and the influencer industry on Business Insider: