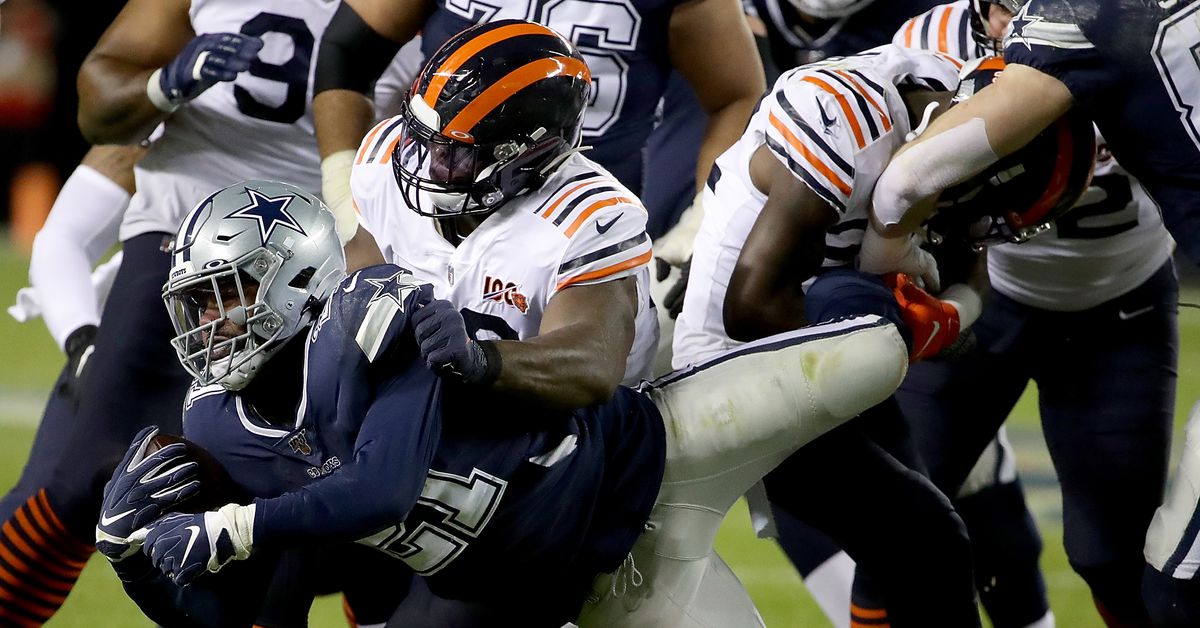 Bilal Nichols has overachieved since joining the Bears as a fifth-round draft pick in 2018. He was a contributor almost immediately and started at defensive end on the top-rated defense in the NFL in the second half of his rookie season.

But now he’s trying to take overachievement to another level.

The 23-year-old Nichols is getting the first shot at replacing the inimitable Eddie Goldman at nose tackle, as the Bears had their first practice in pads Monday at Halas Hall. Goldman, a two-time Pro Bowl alternate and five-year unsung hero in the Bears’ defense, opted out of the 2020 season because of concerns about the COVID-19 pandemic.

Goldman’s absence leaves a significant hole, but one the Bears can fill and survive better than the loss of defensive end Akiem Hicks last year. Nichols, who played tackle at Delaware, is arguably the most intriguing prospect to fill the Goldman vacancy because he fits the Goldman mold as a strong run-stopper and obviously learns quickly.

“Eddie G, he’s a straight-out monster,” the 6-4, 299-pound Nichols said. “He’s a guy I look up to, along with Akiem and guys like that. [He’s] gonna be missed, but I’m ready to step up. I’ve trained hard. I’m ready for this opportunity. I’m ready to just showcase what I can do.

“As far as me playing nose — I played nose a little bit last year and my rookie year, so I’m used to it. It’s nothing I can’t handle.”

The Bears’ defense suffered when Hicks missed 10 of the final 11 games of last season with an elbow injury. But replacing a run-stopper like Goldman might not be as problematic, with a strong supporting cast around Nichols. Roy Robertson-Harris appears first in line to play the end opposite Hicks. And the linebacking corps of Khalil Mack, Danny Trevathan, Roquan Smith and Robert Quinn is expected to be stellar.

“Eddie Goldman — I’m very supportive of his [opt-out] move and what he has to do for his future. That’s first,” Hicks said. “Secondly, I would put Eddie Goldman up against any nose tackle in the league as one of the best do to it. He just has a natural feel to him. I have a lot of respect for him as a player and a person. He will be missed around the building.

But he also expressed faith in Nichols. “Bilal Nichols is gonna step in and play the best football he can,” Hicks said. “He showed promise through the first couple of years. We look forward to him taking the next step forward and getting another position down.”

With the rebuilt offense in developmental mode — a process hindered by the COVID-19 restrictions — the Bears’ defense likely will have to again carry more than its share of the load, especially early this season. The first day of padded practices isn’t much of an indicator. For what it’s worth, Nichols noted a heightened focus so far, usually a good sign.

“We’re actually a lot farther along than I thought we would be,” said Nichols, who will turn 24 on Sept. 14. “Guys are really locked in, attention to detail, the little things, guys have been homed in on ever since we came here. So it’s good to see that, guys taking everything seriously and everyone’s just super locked in. There haven’t been as many mental mistakes as you think there would since we haven’t seen each other in such a long time. That’s just a credit to guys, being mentally sharp and being in that playbook.”

The Bears have other candidates to fill Goldman’s nose tackle role — defensive line coach Jay Rodgers mentioned Abdullah Anderson, John Jenkins and Brent Urban as options. But given his quick acclimation to the NFL as a rookie in 2018, Bilal Nichols seems like the best place to start.