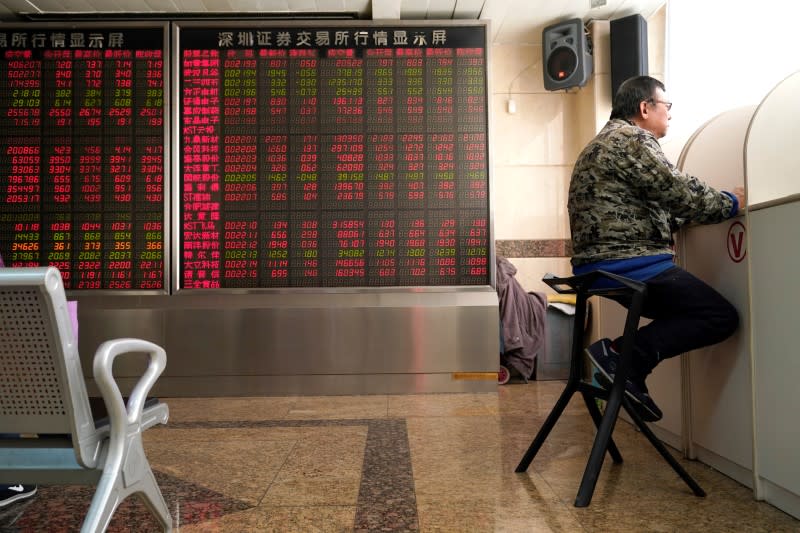 By Swati Pandey and Chibuike Oguh

SYDNEY (Reuters) – A gauge of Asian shares eased on Wednesday led by losses in Chinese and Hong Kong stocks, though it was still near a seven-month peak, driven by ever expanding policy stimulus aimed at cushioning the blow from the coronavirus pandemic.

In an indication of positive start for Europe, futures for Eurostoxx 50 and Germany’s Dax rose 0.3% each while London’s FTSE futures Added 0.2%.

Asian shares had started the day on a positive note too before profit taking emerged in Chinese and Hong Kong shares.

MSCI’s broadest index of Asia-Pacific shares outside of Japan snapped two straight days of gains, dipping 0.1% after earlier hitting a high of 571.33 points, a level not seen since late January.

While emerging markets found some support from the low-yielding environment and a weaker U.S. dollar, worries about the economic hit from the pandemic kept investors jittery, analysts said.

“Continued economic impacts of the current crisis and limited capacity for fiscal and monetary stimulus, except for China, have weighed on sentiment despite the slump in the USD,” analysts at T. Rowe Price wrote in a note.

“While a lower USD removes a significant headwind for emerging markets assets, bigger risks abound for broader EM as they continue to weather the crisis.”

On Tuesday, both the S&P 500 and Nasdaq Composite set records soon after the opening bell, helped by strong sales growth reported by major U.S. retailers including Walmart, Kohl’s and Home Depot.

The closely-watched S&P 500 topped an all-time peak reached in February just before the onset of the COVID-19 pandemic drove the benchmark index to lows on March 23. The index has surged about 55% since then.

At just 126 days, that “is the fastest bear market recovery ever,” said Tapas Strickland, economist at Melbourne-based National Australia Bank.

The U.S. Federal Reserve’s intervention in financial markets to maintain liquidity in the midst of the coronavirus pandemic has pushed risk assets to all-time highs and reduced demand for safe-havens, weakening the greenback.

Market optimism was also buoyed by data showing an acceleration in U.S. homebuilding to the most in nearly four years in July, signifying that the housing sector is emerging as one of the few areas of strength.

In addition, hopes of an interim fiscal package were re-ignited overnight with House Speaker Nancy Pelosi indicating a willingness to cut their proposals in order to seal a deal, NAB’s Strickland noted.

Markets were also paying close attention to minutes from the Fed’s recent meeting due later in the day “for any hints on what the Fed could announce regarding forward guidance come September,” Strickland said.

The Fed has cut rates to near zero to bolster business through the pandemic, sending the dollar to a 27-month low.

The dollar index was last barely changed at 92.22 from above-100 in March. The safe haven Japanese yen was a tad lower at 105.50 versus the greenback.

(Reporting by Swati Pandey in Sydney and Chibuike Oguh in New York; Editing by Sam Holmes)