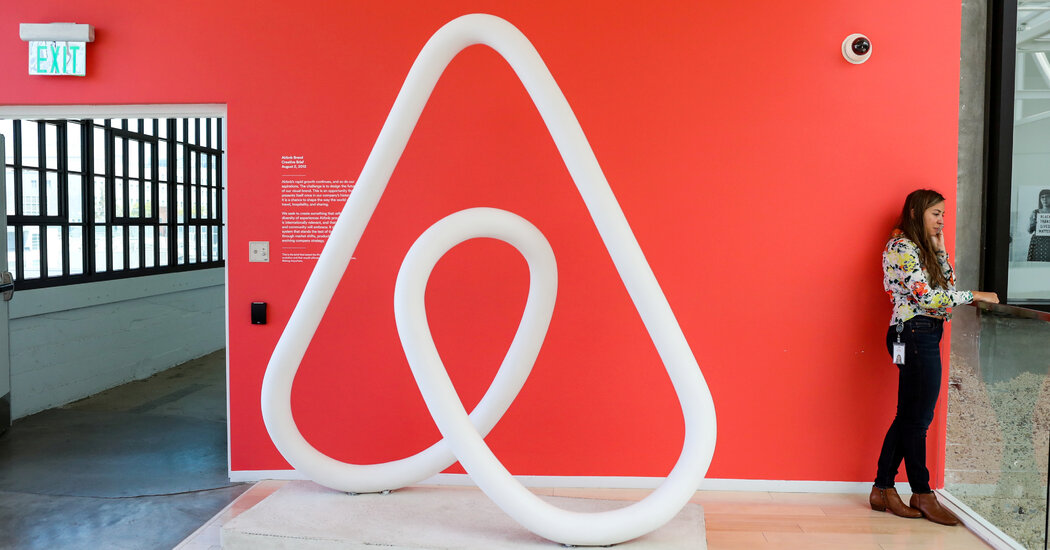 SAN FRANCISCO — Airbnb said on Wednesday that it had confidentially filed to go public, taking a key step toward one of the largest public market debuts in a generation of “sharing economy” start-ups.

A public offering by the company, which lets people rent out their spare rooms or homes to travelers, would cap a volatile year in which its business was devastated by the spread of the coronavirus. Airbnb had been privately valued at $31 billion before this year, and the company must now convince investors that it can thrive and turn a profit in a new era of limited travel.

Airbnb’s offering would signal the end of an era for the first wave of highly valued start-up “unicorns,” many of which were founded in the recession of 2008 and then rode a wave of growth fueled by smartphones, gig work and copious amounts of venture capital. In recent years, many of Airbnb’s well-known “sharing economy” peers have gone public (Uber and Lyft), sold themselves (Postmates), or unraveled spectacularly (WeWork).

Its debut will most likely be helped by an ebullient stock market, which has remained robust despite the economic destruction caused by the pandemic. On Tuesday, the S&P 500 hit a new high as investors focused on signs that the worst might be over.

Start-ups have taken advantage of investors’ excitement for technology. Tech companies including Lemonade, an insurance provider, and ZoomInfo, a business database company, watched their prices soar after listing over the summer.

Other start-ups such as Palantir, a data company founded by Peter Thiel, and Asana, a collaboration technology provider run by the Facebook co-founder Dustin Moskovitz, are also planning to go public this year. Many are pushing to reach the market before the November election, which typically creates volatility in the stock market. Palantir and Asana declined to comment.

Airbnb was founded in 2008 by Brian Chesky, Nathan Blecharczyk and Joe Gebbia as a way to help people make extra money renting out their spare rooms. The platform has spread to almost every country, amassing seven million listings and attracting $3 billion in funding from venture capital firms including Andreessen Horowitz, Founders Fund and Sequoia Capital.

Airbnb takes a cut of the stays and activities that its rental operators book. It has come closer to turning a profit than Uber or WeWork — until the coronavirus evaporated more than $1 billion of bookings almost overnight. In the spring, Airbnb projected its revenue for 2020 would drop to half of the $4.8 billion it brought in last year. The company quickly cut costs, raised emergency funding, laid off almost 2,000 employees and shelved its plans to go public.

“It really did feel like a moment of truth, a bit of a test,” Mr. Chesky, Airbnb’s chief executive, said in an interview this year.

In May, Airbnb’s revenue began bouncing back as people took summer road trips and sought to stay in private homes away from crowds. The company’s gross bookings — which is its total revenue before it pays commissions to hosts — rose to last year’s levels in June and July, according an internal presentation attended by The New York Times.

Perennially an initial public offering candidate, Airbnb has been officially preparing to go public since last year when it announced plans to do so in 2020. Pressure for the offering has mounted as some of its early employees have sought a payday from the company shares that they own, which begin expiring this fall.

Last month, Mr. Chesky announced to employees that Airbnb had resumed its plans to go public, declaring that Airbnb “was down but we were not out.”

The company is likely to pitch investors on its fast rebound and ability to adapt to the new reality, but some forms of travel — like international vacations, business travel or anything related to large events — are unlikely to return anytime soon.

Airbnb also aims to make its public market debut stand out by highlighting its business philosophy, called stakeholder capitalism. The philosophy focuses on what is good for society over short-term profits.

Yet Airbnb has tussled with regulators and local communities. Local regulators have battled the company over taxes and enforcement, while community members have criticized the platform for turning neighborhoods into tourist areas and contributing to housing shortages.

Safety has also been an issue. Last year, after a fatal shooting at a party at an Airbnb rental in Orinda, Calif., Airbnb announced it would ban unauthorized parties and crack down on those responsible. It also sought to verify all of its listings to prevent bait-and-switch situations after a viral article about fraudulent listings.

The problem persists. In August, a fatal shooting at a party at an Airbnb rental in Sacramento prompted Airbnb to pursue legal action against the guest who threw the party, a first for the company.

Airbnb has also struggled with hosts who discriminate against nonwhite guests. In June, the company teamed up with the racial justice group Color of Change to try to measure and evaluate discrimination on its site with the aim of preventing it.

Airbnb has also endured scrutiny from its own rental operators. When travel shutdowns began in March, the company allowed customers to cancel nonrefundable bookings, a move that prompted an outcry among its hosts, who relied on the income. Mr. Chesky later apologized for how the decision was communicated.

In the July staff meeting, Mr. Chesky said Airbnb planned to get back to its “roots” by focusing more on its hosts.

“We realized it is just more pressing than ever that we have to get back to what made Airbnb special,” he said. The realization would not have been so clear to him, he said, “had our business not flashed before our eyes a couple months ago.”

2020-08-19
Previous Post: Behind the scenes working for David Dobrik with Natalie Noel Mariduena
Next Post: Alcanna Reports 25% Growth in Sales, 32% Growth in Gross Margin, and a Return to Profitability in the Second Quarter 2020