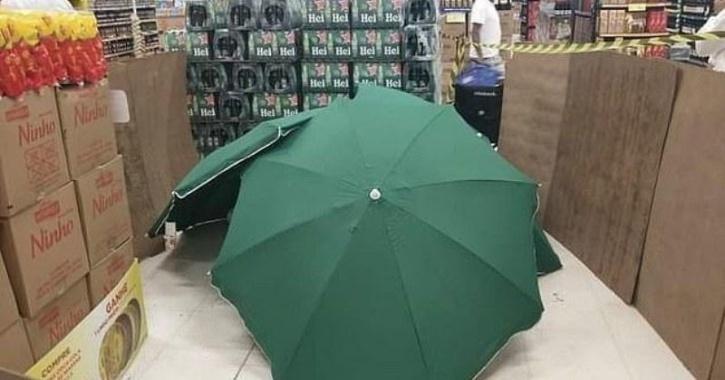 In a shocking incident, an employee of the Carrefour supermarket in Brazil dropped dead at work, however, instead of doing the needful, the staff decided to cover his dead body with boxes and umbrellas in order to keep the store running. Also Read – Bizarre! Brazil President Jair Bolsonaro Calls Amazon Fires a ‘Lie’ Despite Videos Showing the Rainforest Burning

The incident occurred at a store in the northeastern state of Recife on August 14 but only came to light this week, after pictures of the insensitive treatment went viral on social media, sparking outrage.

“A worker died in a Carrefour supermarket in Recife, which covered up his body to remain open. Welcome to Brazil in the year 2020,” one Twitter user wrote.

Here is how others voiced their anger:

In Brazil, a salesman in a Carrefour supermarket had a heart attack in the middle of his shift and died.

Carrefour covered his body with umbrellas in the middle of the hallway and continued operating like nothing had happened until the morgue could come pick it up. https://t.co/2gBWawa4UT

In Recife, Brazil, at a Carrefour supermarket, an employee had a heart attack and died during his shift. Rather than shocking the management or the customers, the market stayed open. The body was left on the floor, hidden under umbrellas. This is what a worker is for capital.

Man dies in Carrefour supermarket in Brazil, body is covered and the store is still open

A man was killed in a Carrefour supermarket in northeast Brazil, but the store kept its doors open after someone covered the body with boxes and umbrellas. pic.twitter.com/Er5Yi1ZAr2

Notably, the employee identified as Manoel Moisés Cavalcante, suffered a heart attack while working in the store. Carrefour said the man had received first aid and that emergency responders’ instructions were to not move the body.

After the social media criticism, Carrefour Brasil apologised on Wednesday, saying that its handling of the incident was inappropriate.

Carrefour in Brazil apologizes for its handling of an employee’s death at one of its stores, which covered the man’s body with boxes and umbrellas and remained open for businesshttps://t.co/xfOjheQ2lV pic.twitter.com/oAVoWWrFyJ

“Carrefour apologizes for the inappropriate way it handled the sad and unexpected passing. The company made a mistake in not immediately closing the store after the incident,” the firm said in a statement.

‘We apologise to the family and stand ready to support them in whatever way necessary,’ Carrefour further said in its statement.

The victim’s wife told news website G1, “I was outraged. Apparently human beings are worth nothing. People only care about money.”

2020-08-21
Previous Post: Skyscrapers Give Way to Sheds as Covid Changes U.K. Real Estate
Next Post: Surge in Demand for Cybersecurity Services a Boost for UK Startups