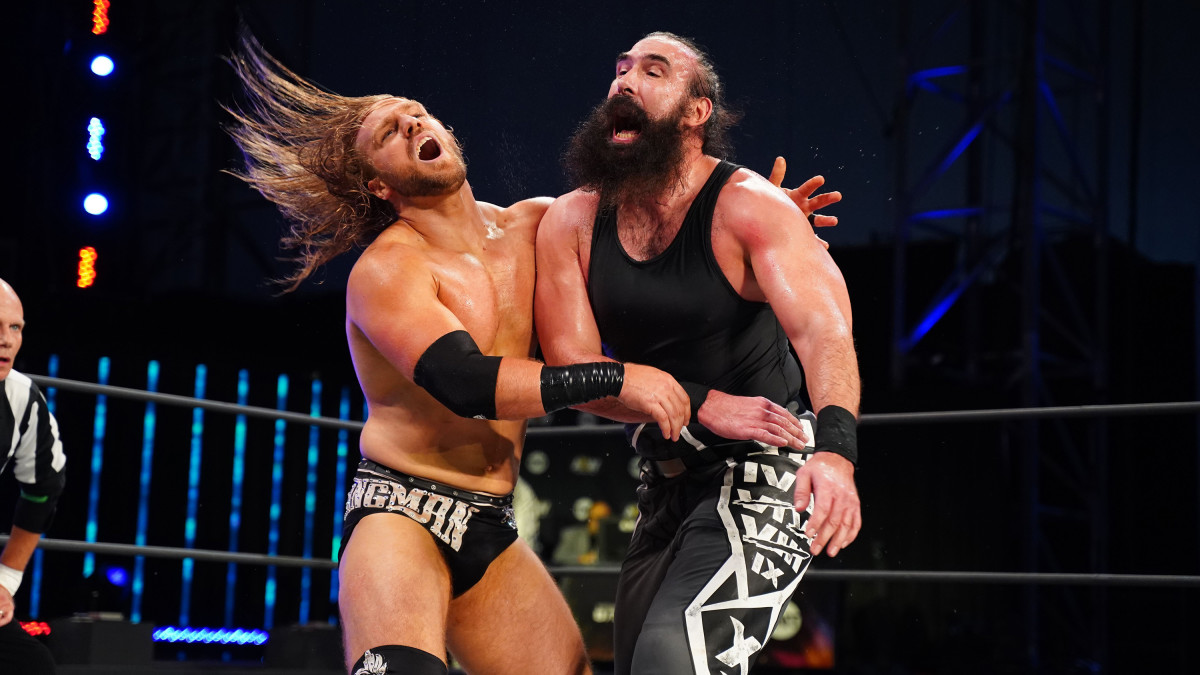 Brodie Lee challenges Cody Rhodes for the TNT Championship this Saturday on Dynamite, providing an opportunity for more than wrestling gold.

Lee debuted for AEW in March, revealed as “The Exalted One” and leader of the Dark Order. He was quickly thrown into the world title picture, where he was unsuccessful in his attempt to dethrone AEW Champion Jon Moxley at Double or Nothing in May.

The reality of that loss was not devastating, but perception and reality are distant relatives in pro wrestling. Lee took Moxley’s Paradigm Shift finisher through the entrance ramp, returned to the ring covered in blood, and the match ended by referee stoppage after Moxley choked out Lee. But a monster loses a piece of his aura with every defeat, especially in a profession that quickly moves onto the next commodity. The question of what happens next was the immediate thought that hit Lee, sticking with him far longer than the cuts and bruises he took in the match against Moxley.

“I doubted myself after that Moxley match,” said Lee. “I was in my head after that. Coming off a loss in a world title program is a reality I’ve never had to deal with before.

“To his credit, Dax Harwood of FTR said something special to me backstage. ‘We don’t need a self-doubting Brodie,’ he said. ‘We need an ass-kicking, cocky-ass Brodie.’ He’s right, and that’s what you are going to get. I’ll apologize to Cody after the fact.”

The match with Rhodes this Saturday could be viewed as a battle of two former WWE stars—they were key cogs in the success of the show-opening Intercontinental title match at WrestleMania 31, one that also included Moxley—but the 40-year-old Jon Huber is intent on showcasing a different side of himself as Brodie Lee.

“This is the spot I want to be in, it’s why I bet on myself,” said Lee. “I don’t want to go back and sit in catering, I want to kick someone’s ass. That’s where Cody comes in. I’m going to make my own mark. A match with him is a very important to show that I belong in AEW.

“Moxley knew me so well, and he was prepared for a different level of violence. I’m not sure Cody is ready for what I bring. You’re going to see that this Saturday.”

Formerly known as Luke Harper in WWE, Lee is best known for his work in the Wyatt Family. Two other members of the group, Bray Wyatt and Braun Strowman, wrestle this Sunday at WWE’s SummerSlam.

“I think it’s a really cool thing that three members of the Wyatt Family are competing for major titles in major companies on the same weekend,” said Lee, who was informed that Strowman extended some compliments toward Lee in a recent interview with Sports Illustrated. “And it’s nice of Braun to put me over in interviews, but it would be nicer if Braun actually said those nice things to the people that helped him.”

Lee is extremely proud of the career he built in WWE, though his entire focus is on the future with AEW. He leaned on wrestling veteran Chris Jericho for advice when debating how much of his past to incorporate into his present character.

“I’ve changed this character to something people never thought it could be, something people never thought I was capable of doing,” said Lee. “I spoke a lot about this with Jericho when I was deciding how different I wanted to be in AEW. I asked if I should act like WWE never existed, but Jericho said no, ‘The fans know who you are, what you’ve done, and who you’ve worked with.’ He’s right. So to come in and deny that the Wyatt Family was something special, I can’t do that and I won’t do that. Look at this weekend, it’s pretty cool what we’re still accomplishing.”

Lee has been steadily building the Dark Order, a faction with untapped potential.

“I’m happy where it’s going, but I’m not happy with where it is or where it started,” admitted Lee. “We lost the feel of what Dark Order should be. Now that everyone is finally back, we are finally starting to learn, internally, about our potential. We can work with everybody—the Lucha Bros., the Best Friends, The Elite, anybody—and we’re going to show that.”

“It’s pretty frickin’ cool that the pressure is on to keep people in their seats on a Saturday night in August after the NBA,” said Lee. “We need this to be a huge show for us, and I’m a big part of it. That’s why I came here, for pressure-filled situations like this.

“This is going to be a very special moment that holds a lot of gravity to my career. It’s a perfect setting, the pressure is on me to deliver, and this Saturday is going to be a great f—— time to watch pro wrestling.”

2020-08-21
Previous Post: Rackspace alleges employee ‘threatened’ to go to media with ‘concerns’ over its business practices
Next Post: COVID-19 pushes World Economic Forum in Davos to likely be virtual in 2021