A look at this hot-button issue

Pennsylvania sits on trillions of cubic feet of Marcellus shale natural gas, with most of the state’s active wells drilled in the southwest, northeast and northcentral parts of the state. 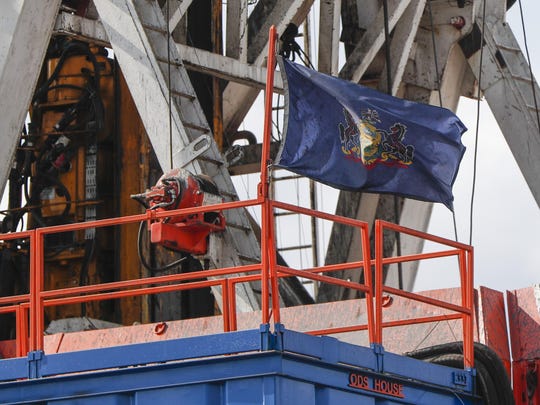 In this file photo from March 12, 2020, the flag of the Commonwealth of Pennsylvania flies on the drilling rig as work continues at a shale gas well drilling site in St. Mary’s, Pa. Pennsylvania attorney general Josh Shapiro is scheduled to release results on Thursday June 25, 2020 of a grand jury investigation into natural gas hydraulic fracturing. The fracking process has raised environmental concerns while turning the state into a major energy producer. (Photo: AP Photo/Keith Srakocic, File)

The campaigns of both Trump and Joe Biden have been focusing heavily on Pennsylvania, making frequent visits to parts of the state that are home to fracking operations, such as Pittsburgh and Luzerne County.

To understand this focus on fracking, it’s important to acknowledge Pennsylvania’s relationship with the industry.

The commonwealth is the largest natural gas producer in the nation that does not impose a severance tax, although it does charge a per-well impact fee.

The most recent tax break, passed in July as House Bill 732, is an amendment to the Pa. tax code and may save companies up to $667 million over 25 years. The bill provides incentive for companies looking to establish themselves in the state.

In turn, the industry is said to have contributed millions to regional economies between 2004 and 2016. A study conducted by Carnegie Mellon University found this contribution to be about $21 million.

These costs are incurred when operations contribute to environmental damage or premature deaths related to fracking, according to the report.

Environmental and community safety: In June of this year, state Attorney General Josh Shapiro announced Range Resources pleaded “no contest” to charges of negligent oversight of well sites in Washington County. Multiple site investigations revealed the company had contaminated local creek waters, resulting in damage to a small portion of acreage on a nearby farm, which required the removal of approximately 100 trees and 12,000 square feet of soil.

A 2018 pipeline explosion in Beaver County forced the evacuation of dozens of homes “shooting fire 150 feet into the air.”

Clean drinking water has also come up in the debate over Marcellus shale and fracking.

The Delaware River runs 330 miles from upstate New York through Pennsylvania to Maryland. Marcellus shale underlies 36% of the river basin.

In September 2017, the Delaware River Basin Commission, a coalition of experts from the tri-state area, approved a resolution to publish proposed changes to its regulations that would ban high volume hydraulic fracking in the watershed and discourage both the export of water for fracking outside the basin and import of fracking wastewater.

New York included legislation in its 2021 Fiscal Year budget to permanently ban hydraulic fracturing. The ban was introduced in 2015 after the New York State Department of Health found evidence of increased water and air pollution related to the process, and a lack of evidence to contradict those concerns.

A 2015 study revealed that several homes in Bradford County had drinking water contaminated by fracking.

Studies suggest that fracking may be to blame for some air pollution.

In this year’s State of the Air Report, the American Lung Association gave Washington County, home to most of Pa.’s fracking operations, a “C” grade. Pittsburgh and the New York-Newark metropolitan area, which includes the Poconos, both received a failing grade. The Scranton-Wilkes-Barre region received a “C” grade.

The report highlighted threats to regulations on the natural gas industry as hazardous to air quality. The Trump administration has attempted to roll back Obama-era regulations on methane emissions. The regulation requires gas companies to monitor and limit methane leaks from wells.

Climate Point: Trouble in the Galapagos. Drilling in Alaska? And more record heat. 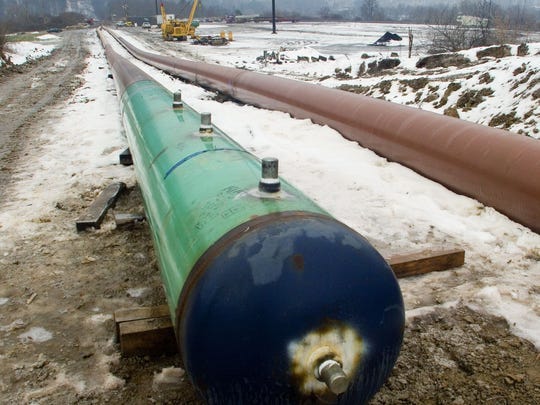 The Constitution Pipeline, pictured in January 2015, would have brought natural gas from the fracked fields in Susquehanna County, Pennsylvania to eastern and southern parts of New York. The company pulled the plug on the project Friday. (Photo: FILE PHOTO)

Just how many fracking jobs are there in Pa.?

Trump has frequently attacked Biden’s stance on energy in the Keystone State, citing the preservation of jobs in the natural gas industry.

In early September, Trump came to Latrobe, Pennsylvania, about an hour east of Pittsburgh, and warned that if fracking were banned it would eliminate 900,000 jobs before claiming a few minutes later that there are 940,000 fracking-related jobs.

That, according to one fact check report, exaggerated the number of industry jobs by 3,500 percent.

Citing an analysis by the environmental group Food & Water Watch, Pittsburgh City Paper’s Ryan Deto wrote that there were about 26,000 fracking-related jobs in Pennsylvania between 2016 and 2018 and that number likely declined in recent years as market prices have declined and companies made cuts.

The industry, though, has historically asserted many more jobs rely on it than some critics have claimed. A 2017 report commissioned by the American Petroleum Institute claimed the industry supported 322,600 jobs in Pennsylvania, including more than 216,000 related jobs in areas such as services, wholesale and retail, manufacturing, transportation and warehousing, and others.

Data shows that fracking jobs fell in 2016, even though production increased. The Delaware Riverkeeper report attributes a recent low in employment in the industry to falling gas prices and automation reducing the need for labor.

In a 2015 report published in the Agricultural and Resource Economics Review, it was found that half of fracking jobs in Pennsylvania weren’t filled by locals.

“The development of the Marcellus has had only a modest impact on overall employment and that the local employment impact is likely to be even smaller,” the report says.

According to the report, fracking jobs are highly specialized, and typically attract employees who may commute or relocate for the job.

“In the case of the Marcellus, many of the jobs created are regional, transitory,” the report says. “The analysis confirms what many local residents have been saying: much of the increase in employment from Marcellus shale development in Pennsylvania has largely benefitted out-of-county and out-of-state residents.”

In a recent interview with the Pocono Record, U.S. Sen. Pat Toomey said Biden’s plan to curtail domestic energy production, specifically natural gas exploration, would hurt Pennsylvania workers. Biden has made conflicting statements on fracking in the past, but his campaign has clarified his position as “banning new oil and gas permitting on public lands and waters,” while leaving states alone to decide if they should continue the practice.

Related: How the next presidency could impact economy in the Poconos

Trump used Biden’s inconsistencies on fracking against him during Tuesday’s rally, telling crowds Biden flip-flopped on the issue of fracking in Pennsylvania “like nothing happened.”

According to Congressman Fred Keller (PA-12), Biden has been “pandering” to voters depending on where he is stumping.

“It’s hard to tell” where the former vice president stands on fracking, Keller, a Republican, told Fox News. “He tells one group one thing, and the other group another thing, depending on his location.”

Trump has often criticized Biden’s position on fracking, in person and on Twitter.

In Tuesday’s rally, Trump asked the crowd if they “could imagine” he told them he would ban fracking.

“I’m the opposite of that, by the way,” Trump said.

Last week, Trump tweeted a video of a town hall in which a member of the audience who hailed from western Pennsylvania asked Biden running mate Kamala Harris her position on fracking. Trump included his reaction to the video: “Joe Biden and Kamala Harris BOTH want to BAN FRACKING.”

When asked if she would commit to a federal ban, Harris responded: “There’s no question I’m in favor of banning fracking.” The clip in question is footage from a CNN town hall in 2019, while Harris was campaigning to be the democratic nominee for president, and before Harris joined Biden as his running mate.

In the full version of the clip, available on YouTube, Harris explains her history on fracking in California as it pertains to drilling on public lands and acknowledges possible environmental and public health concerns due to fracking.

The social media stratosphere was quick to call out contradictions on Trump’s pro-fracking stance.

I think there’s a story we’re missing here. Fracking for natural gas is putting coal out of business. Trump is pro fracking. Trump is pro coal. How’s that work? https://t.co/V0p2M9j180pic.twitter.com/4VAfSoEZvP

Some called Trump out on being pro-fracking and pro-coal at the same time. This stance could be perceived as contradictory as the fracking industry has been quickly replacing the coal industry in Pennsylvania.

In Pennsylvania, the fracking boom has contributed to a lesser dependence on coal, as natural gas provides a cheaper and cleaner alternative to the fossil fuel.

It is finally happening for our great clean coal miners! https://t.co/suAnjs6Ccz

Trump in the past has expressed support for coal miners and the coal industry, ending related tweets with the hashtag: “#EndingWarOnCoal”

More: President Trump has yet to save the struggling coal industry, numbers show

More: Always a battleground: Is Pa. the most important swing state in the 2020 election?