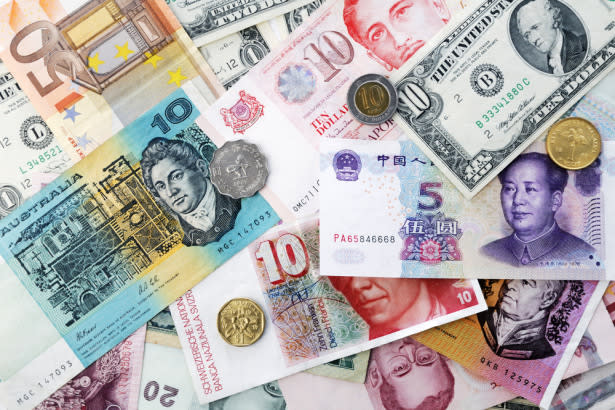 A Busy Economic Calendar Puts the EUR, the Pound, and the Dollar in Focus

Earlier in the Day:

It’s was a relatively busy start to the day on the economic calendar this morning. The Japanese Yen was in action in the early part of the day.

For the Japanese Yen

In July, consumer prices rose by 0.3%, following a 0.1% increase in June, with the annual rate of inflation picking up from 0.1% to 0.3%. Core consumer prices were unchanged, year-on-year, following a 0.2% decline in June. Economists had forecast a 0.1% rise. The figures were released by the Ministry of Internal Affairs and Communication,

According to the August Markit Survey,

It’s a busy day ahead on the economic calendar. Key stats include August’s prelim private sector PMIs for France, Germany, and the Eurozone.

While manufacturing PMI numbers will need to avoid a fall, the focus will likely remain on the service sector PMIs.

It’s a busy day ahead on the economic calendar. July retail sales figures and August’s prelim private sector PMIs will provide the Pound with direction.

Away from the economic calendar, Brexit news updates will also need monitoring.

The service sector PMI will have the greatest influence on the day.

Away from the economic calendar, updates on the COVID-19 stimulus package and any further moves against China will also influence.

It’s a relatively quiet day on the economic data front. June retail sales and July house price figures are due out later today.

We would expect the retail sales figures to have the greatest influence ahead of 2nd quarter GDP numbers due out next week.

From elsewhere, private sector PMIs from the Eurozone and the U.S will also influence.

Away from the economic calendar, any chatter from Beijing or Washington will also need monitoring.

For a look at all of today’s economic events, check out our economic calendar.