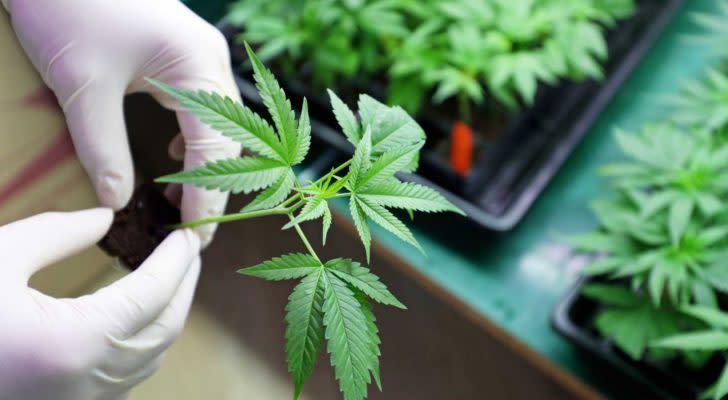 7 Marijuana Stocks to Buy As the Industry Continues to Grow

Finding the best marijuana stocks to buy isn’t an easy task. However, despite having generally under performed, many still have a lot of potential.

While differing regulations across jurisdictions and borders have hampered near-term growth, the global legal marijuana market is still forecast to reach $73.6 billion by 2027, according to market research by Grand View Research Inc.

That equates to a compound annual growth rate (CAGR) of 18% in each of the next seven years. The continued legalization of both medical and recreational marijuana in the U.S. and abroad is expected to propel the industry higher. This means there will still be promising marijuana stocks to buy as several should rise in coming years. While the road ahead might be volatile, there’s no doubting the potential growth that is waiting to be unlocked in marijuana stocks for long-term investors.

Let’s take a look at what makes each among the best marijuana stocks to buy now.

We’ll start with the largest marijuana company by market capitalization, Canopy Growth. Being the biggest player in the recreational marijuana space has made Canopy Growth vulnerable to the industry’s growing pains over the past few years.

Earlier in 2020, the Canadian-based company reported a whopping 1.3 billion CAD loss for its fiscal fourth quarter, announced the layoff of 500 staff members and closed two of its largest greenhouses where it grows marijuana. The company also scrapped plans to open a new third greenhouse. Additionally, Canopy Growth has endured a lot of changeover among its executive ranks and board of directors. The Chief Executive Officer, Chief Operating Officer and Chief Commercial Officer have each changed in the past year.

All the turmoil has wreaked havoc with CGC stock, which is 41% below its 52-week high at $16.92 a share. Yet, there is reason to be optimistic about Canopy Growth’s future prospects.

The company’s most recent fiscal first quarter results were much improved, demand for recreational marijuana has risen since the novel coronavirus pandemic brought life as we know it to a halt, and Canopy Growth is cash rich, having 2 billion CAD in reserves. These facts mean that Canopy Growth is more resilient than many smaller marijuana companies and capable of withstanding the industry’s ups and downs. The company has also seen an upswing in its medical marijuana sales and recently launched a new U.S. focused e-commerce website called ShopCanopy.com that gave its shares a boost.

Investors can expect that Canopy Growth will find its footing and that its share price will appreciate in time. As such, it remains one of the key marijuana stocks to buy.

Like most marijuana companies, Tilray has seen its stock get beat up over the past year. In fact, TLRY stock has fallen 85% in the past 12 months and is now trading at just over $7 a share.

However, investors playing the long game should look at Tilray stock as a buying opportunity at current valuations. On Aug. 10, Tilray released its second-quarter results that were downright scary. From April 1 through to June 30, the company lost $81.7 million, a 125% increase from the $36.3 million loss reported in the same period of 2019. Sales across all business segments, including hemp products, rose by only 10% year-over-year in the second quarter to $50.4 million. The poor results sent investors fleeing and TLRY stock fell 13% the next day.

However, it’s not all bad for Tilray. Investors looking for a silver lining can take comfort from the fact that sales from the company’s international segment, while totaling only $8.3 million, were up 349% from the second quarter of 2019, and medical marijuana sales also jumped in the most recent quarter. Also, Tilray has a product line that is more diverse than many marijuana companies, focusing on recreational and medical products, as well as hemp.

It all bodes well for the company’s long-term prospects. Plus, much of the second quarter loss can be attributed to one-time, non-recurring charges and a one time inventory write down. TLRY stock may surprise on the upside in the coming months.

Aurora Cannabis’ stock been a real yo-yo. The price of ACB stock had grown nearly 250% between 2015 and when Canada officially legalized marijuana use throughout the country in 2018. However, the share price then fell 91% from its record high of $128.27 on poor earnings and a lack of demand for legal marijuana products.

But after reporting better than expected quarterly results this spring, the price of ACB stock jumped 200% in one week to $17.40 a share. Sadly, the stock has fallen again in recent months and now trades just under $10 per share. So what to make of this extremely volatile stock and the company behind it?

Like many marijuana producers, Aurora Cannabis has struggled with fluctuating demand and struggled to manage its inventory. The company has closed five of its production facilities and sold off its largest greenhouse that had one million square feet of production space. Aurora Cannabis has also halted construction on two other production facilities that had been in the works. With scaled down operations, Aurora Cannabis has forecast that it will post an operating profit by the first quarter of 2021. Time will tell if the company succeeds, but investors may want to consider grabbing ACB shares before they jump higher — again.

Not only is Aphria one of the largest marijuana companies with a market capitalization of $1.30 billion, but the company’s stock is outperforming the broader sector. Since August 2019, APHA stock is down 25% to $4.63 a share, compared with a decline of 52% for the Horizons Marijuana Life Sciences ETF, which is widely used by analysts as an industry benchmark. There’s reason to be bullish on Aphria, which is doing better today than many of its peers.

Aphria is moving aggressively into the cannabis derivative market that includes edible products, and is also focusing on vape products, where it is currently the market leader. Also, Aphria is ranked No. 1 in the adult-use recreational cannabis market in Canada, where the drug is 100% legal in all jurisdictions. And, Aphria is also having success expanding into Europe, notably Germany, due to several strategic acquisitions.

Put it all together and it’s easy to see that APHA stock has a lot of potential upside, which makes it one of the more promising marijuana stocks to buy now.

Now for a marijuana stock that has been crushing it lately. On Aug. 13, GRWG stock was trading at $9.88 per share. In the last five trading days, the stock price has more than doubled (up 123%) to $22.02. The stunning jump has been due to the fact that the company’s sales grew more than 100% in the second quarter on strong demand for its hydroponic and gardening products that are used by marijuana growers large and small.

While GrowGeneration’s shares trade at 156 times expected earnings, the current share price could be justified if the company can maintain its current sales momentum and meet its ambitious growth projections. Chief Executive Officer Darren Lampert is confident, noting that his company is well-positioned to capitalize on a multi-billion dollar industry that is still in its infancy. If he’s right, and GrowGeneration can continue supplying marijuana growers with the equipment needed to cultivate the plant, then GRWG stock may be cheap at its current level.

As a marijuana producer, Cronos Group is vulnerable to the challenges that have plagued the entire industry in the U.S. and Canada. Covid-19 related store closures, inconsistent regulations and government red tape, and a strong black market have conspired to hurt Cronos Group’s sales and growth. For the second quarter, the company reported an operating loss of $31.3 million, compared to a loss of $16.8 million in the year earlier period. The news sent CRON stock down 16% recently, and it currently trades at $5.44 a share.

Despite the struggles, Cronos Group is well positioned to ride out the current turmoil and stay afloat until it can find firmer footing. The company ended the second quarter with more than $1.3 billion in cash and investments, which is more than most of its competitors. Equally positive, Cronos Group has almost no debt and there are signs that the entire marijuana market might be bottoming. Nowhere left to go but up — fingers crossed.

Now we’re firmly into penny stock territory as Hexo’s share price is currently under $1 at just 72 cents per share. HEXO stock has been more beat up than most marijuana companies. In 2019, it was trading at nearly $8 per share. The sharp decline has come after Hexo’s marijuana infused beverages — it has a strategic partnership with beer maker Molson Coors (NYSE:TAP) — failed to takeoff as hoped. Staff layoffs and production facility closures have followed.

But to its credit, Hexo has been working to diversify its offerings, selling a range of marijuana products such as cannabis oils, sub-lingual sprays, marijuana powder and dried flowers. Also, Hexo operates and sells in marijuana markets around the world, even Israel. This diversification offers a glimmer of hope for the battered HEXO stock and its shareholders.

Joel Baglole has been a business journalist for 20 years. He spent five years as a staff reporter at The Wall Street Journal, and has also written for The Washington Post and Toronto Star newspapers, as well as financial websites such as The Motley Fool and Investopedia. As of this writing, Joel Baglole did not own any of the aforementioned stocks.

The post 7 Marijuana Stocks to Buy As the Industry Continues to Grow appeared first on InvestorPlace.

2020-08-23
Previous Post: States have a significant role in NEP implementation at the grass root level: NITI Aayog CEO
Next Post: Flood of IPOs to Test Resilience of China’s Sizzling Tech Board