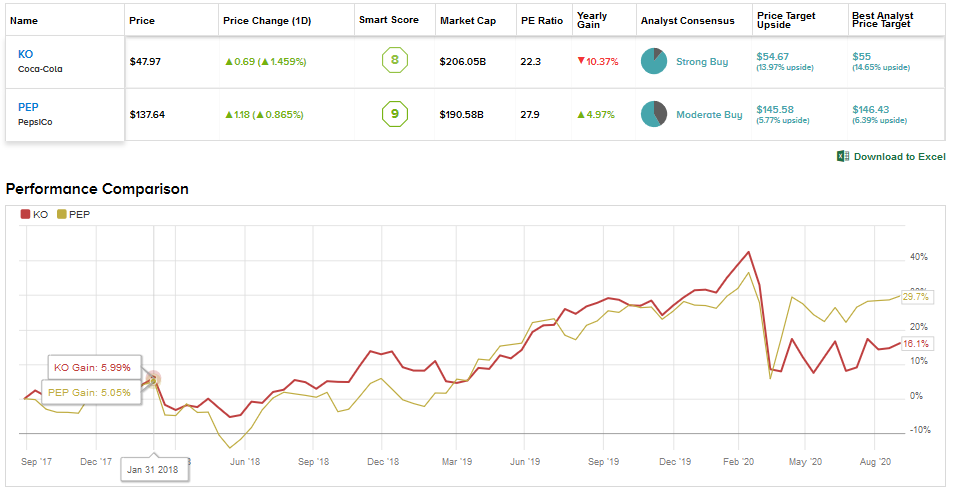 Which Beverage Giant Is A Better Pick?

The pandemic had a mixed impact on packaged food and beverage companies. The stay-at-home orders led to increased demand in the at-home channel. However, lower sales in on-the-go channels significantly hurt sales.

Coca-Cola and PepsiCo have been closely competing in the non-alcoholic beverage space for decades. Amid the current crisis, we will discuss the performance of these soda giants and use the TipRanks’ Stock Comparison tool to see which stock offers a better investment opportunity.

The pandemic’s impact on Coca-Cola’s second-quarter performance was so immense that the company posted its largest revenue decline in at least 30 years (as per CNBC). The second-quarter revenue fell 28% Y/Y to $7.2 billion, while organic revenue plunged 26%.

Global unit case volume dropped 16% due to a steep decline in the volumes in away-from-home channels, like restaurants, which account for over 50% of the company’s top line. The second-quarter adjusted EPS fell 33% Y/Y to $0.42.

The pandemic did not spare other categories too. Tea and coffee volumes fell 31% and volumes of water, enhanced water and sports drinks were down 24%. Also, volumes of juice, dairy and plant beverages tanked 20% even as the demand for Fairlife milk and Simply juices was strong in North America.

Coca-Cola has been focusing on the non-soda categories as consumers have been shifting from sugary, soda drinks to healthier options. It has been expanding its non-soda portfolio through innovation and several acquisitions, including Britain’s COSTA coffee.

Coca-Cola believes that the worst might have been over in the second quarter based on improvement in the away-from-home channels as lockdown restrictions have started easing. Also, there is sustained demand in the at-home consumption. The company’s worldwide unit case volume declined by mid-single digits in July (month-to-date as of July 21) compared to a 10% decline in June and 25% in April.

Coca-Cola intends to streamline its beverage portfolio by focusing on fewer but bigger and stronger brands. Of the company’s 400 master brands, more than 50% are single-country brands and these generate only 2% of the overall revenue. The company wants to get rid of such brands and direct its resources to the popular ones. (See KO stock analysis on TipRanks)

Coca-Cola stock has declined 13% year-to-date in 2020. The average price target of $54.67 reflects an upside of about 14% over the coming 12-months. Despite the performance in the first half, Wall Street has a Strong Buy consensus for Coca-Cola based on 8 Buys and 1 Hold rating.

On July 22, Morgan Stanley research analyst Dara Mohsenian upgraded Coca-Cola stock from Hold to Buy with a price target of $54. The analyst believes that the second-quarter was the bottom and there is sequential top line improvement ahead. On August 17, Mohsenian reiterated his Buy rating and said that the stock’s valuation is compelling.

PepsiCo has also been impacted by the current crisis. However, the company’s snack food business has helped its resilience despite several challenges. PepsiCo’s second-quarter revenue declined 3.1% Y/Y to $15.9 billion, while organic revenue was down 0.3%. The company’s adjusted EPS fell 14.3% to $1.32.

In contrast, revenue from the PepsiCo Beverages North America segment declined 7% due to lower sales in convenience and gas and foodservice channels. Overall, the segment’s soda volumes fell 10% and non-soda volumes were down 8%. On the brighter side, the company gained market share in ready-to-drink coffee, tea and enhanced water. Also, Pepsi Zero Sugar and Bubly delivered double-digit growth.

PepsiCo’s revenue from Latin America and Europe declined 17% and 9%, while revenue from Africa, Middle East and South Asia fell 1%.

PepsiCo is seeking growth in the energy drinks space through its Rockstar acquisition and distribution of VPX Sports’ Bang energy drinks. It is also enhancing its portfolio of better beverage and food options. PepsiCo aims to ensure that over 67% of its beverage volumes don’t have more than 100 calories from added sugar per 12 ounces by 2025. It is also planning to cut down salt and saturated fat levels in its food offerings.

PepsiCo’s second-quarter results prompted Guggenheim analyst Laurent Grandet to raise his price target to $151 from $148. The analyst feels that PepsiCo’s recent results indicate that it is among the least impacted of beverage peers during the pandemic due to its large snacks and at-home food exposure.

PepsiCo has a cautiously optimistic Moderate Buy consensus based on 7 buys and 5 holds. A 12-month average price target of $145.58 indicates a 6% possible upside in the stock. PepsiCo stock has risen 0.7% year-to-date.

PepsiCo’s exposure to snack foods gives it an edge over Coca-Cola. PepsiCo’s second-quarter performance and year-to-date stock movement are better than Coca-Cola. But keeping in view the upside potential over the next 12 months, lower valuation and the Street consensus, Coca-Cola looks to be a better bet.

Disclaimer: The opinions expressed in this article are solely those of the featured analysts. The content is intended to be used for informational purposes only. It is very important to do your own analysis before making any investment