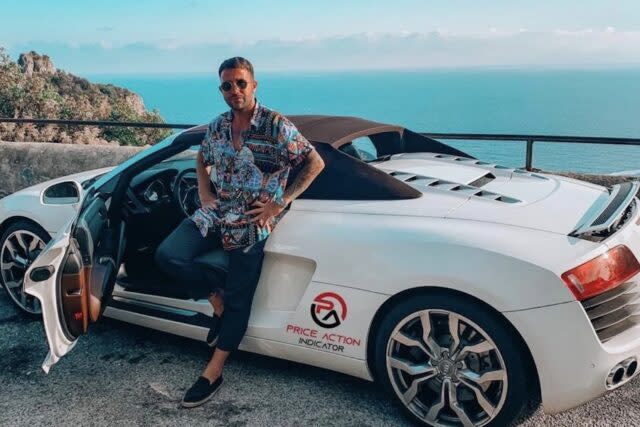 In the digital age, hundreds of people are letting their entrepreneurial spirit flow and looking for the best way to generate income independently on the web. The term “financial freedom” is becoming more and more accessible to those who, with determination and a clear objective, decide to set out on the road in search of their promising future.

However, along this path, finding difficulties can be common, even within the same web, it is possible to find people who, taking advantage of the little experience or desire of another to achieve their goal, sell false promises and scams that can discourage an entrepreneur in the process. Even Gianluigi Ventre, a successful entrepreneur, expert in financial markets on the Internet had to experience something like that.

He has achieved results with study, effort, and dedication in the area where he has worked for several years. The Internet has become the ideal space for this young man to work, however, before achieving success and recognition, there were many processes he had to go through.

In principle, Gianluigi, like any other young dreamer of a great future, lived with his parents, who work as a club owner and his working mother in a factory. The discipline and responsibility of his parents was an inspiring aspect and on which Gianluigi has based his personal and working life.

Interested in the world of finance from a very young age, he began to study, became a poker fan in high school, and soon stood out as an extraordinary competitor. At his father’s club, he had the opportunity to participate as a player, and even as a croupier, he made big profits.

He managed to enter the digital environment, facing professional players online. He even developed a bot (automated system) that allowed him to play simultaneously on different platforms, which brought him great benefits. At the age of 19, Gianluigi had managed to make a fortune from this experience.

However, he knew that he needed to advance his goal of financial independence and that satisfaction would come from finding his true passion for work. Determined to pursue this, he left college, moved from his hometown, and began what would represent his journey of growth.

He lived in several countries and cities, where he had the opportunity to gain more experience in what he wanted to learn, sales skills, the workings of the business environment. He even ventured into sports as a professional boxer.

All of this allowed him to continue growing, training in discipline, determination, and perseverance. However, he never stopped studying and going deeper into what was his goal, to understand the handling of the online financial markets.

Anxious to undertake this facet, he found online scammers who sold him fake courses, falling victim to other scams. However, this did not stop him from advancing in his goal and discovering that he had real skills for this sector, which he combined with extensive study and dedication to become the best.

After achieving a breakthrough in his career, Gianluigi managed to found his own company. After collaborating with other companies and obtaining favorable results. He created more profitable and automatic systems that allowed him to monitor the market 24 hours a day.

Already an expert, he was called by a company to collaborate with the management of its fund. In only 18 months he multiplied the benefits 240% and increased the profits by 50%. This not only showed him that he was on the right track, but also that he was working in the right way.

His prestige not only led him to be the best at his job, but it also gave him the possibility to contribute, imparting his knowledge to others and guiding those who want to achieve financial freedom appropriately. “I have chosen this job because it has always been my goal and I am delighted with the choice I made years ago, if you like what you do, I wouldn’t call it a job”.

He emphasizes that clarity, transparency, and accountability are an elemental part of what he does. Both in teaching business practices and in promoting his business and products. For him and his clients, trust is everything.

He claims that his greatest success has been achieving financial freedom, which has allowed him to lead a lifestyle with greater benefits. This includes traveling to the most beautiful places in the world and choosing to live where he likes.