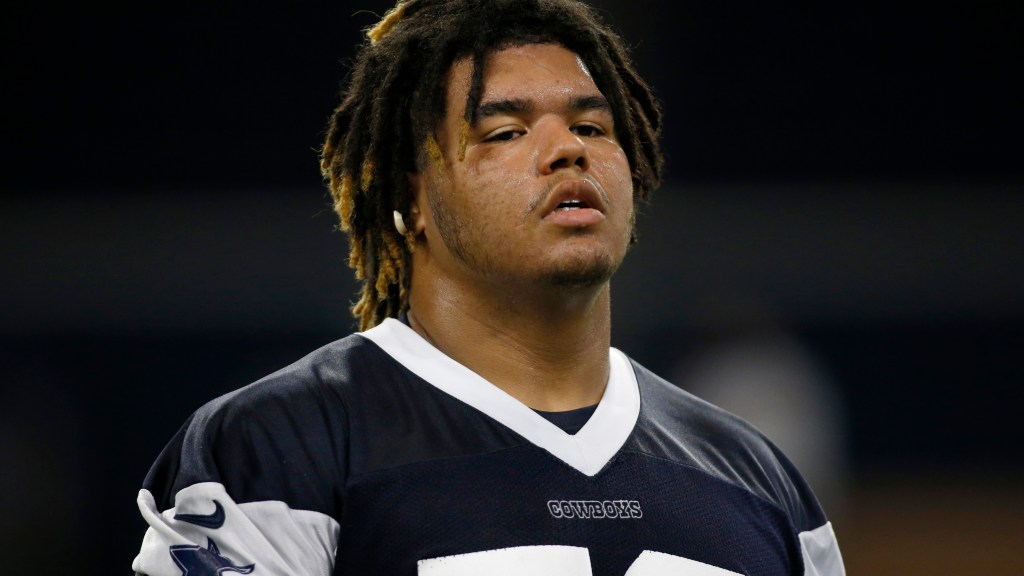 Trysten Hill‘s rookie season didn’t go as planned by anyone involved with the 2019 version of the Dallas Cowboys. Despite former defensive coordinator Rod Marinelli’s infatuation with the UCF defensive tackle, which started during the draft process, Hill played in only seven games as a healthy scratch or just left on the sidelines more often than not. He notched just five tackles and had zero sacks as a rookie.

That was the least of his issues. The same maturity issues that plagued him in college reared their head in Dallas, leading former head coach Jason Garrett to send him home after showing up late to a team meeting. There’s been speculation of shipping Hill out and reuniting him with Marinelli in Las Vegas with the Raiders. As of now, that’s not happening. With the season-ending injury to Gerald McCoy it’s Hill that’s getting the first shot at filling his shoes.

In first practice without DT Gerald McCoy, it was clear that 2019 second-round pick Trysten Hill will be given every opportunity to show he’s ready for expanded role on Cowboys’ defensive line. It’s up to him now to seize that chance. Hill played 121 defensive snaps as rookie.

It seems clear head coach Mike McCarthy will give Hill the opportunity to sink or swim, even praising the second-year player to the media, claiming his off-season work was impressive and that he’s off to a good, if brief, start to training camp.

Mike McCarthy on DT Trysten Hill: I really like what he’s done, since really the virtual meetings. He was always looking for extra work, asks a lot of questions, I’ve been very impressed. Only in pads one day, but I think he’s off to a good start in training camp.

Just a day earlier, team defensive captain and fellow defensive lineman Tyrone Crawford was singing the praises of Hill and his transition from after thought to possible key piece in the blink of an eye.

Tyrone Crawford is a defensive captain and a team leader, so this quote about Trysten Hill would be noteworthy, regardless.

It takes on another level of significance if Gerald McCoy’s injury is long-term. Despite their efforts to improve the DT spot, they may be counting on Hill pic.twitter.com/1DGujZVLP5

It’s unlikely Hill will make anyone forget about the loss of McCoy any time soon, however a fresh start could be the shot in the arm he needed. Hill has shown in the past that he may not be suited for every coaching style, and maybe the new staff at The Star in Frisco can breathe life into a talented and inconsistent player.

(Video via the Dallas Cowboys) pic.twitter.com/0zp4qlLuGA