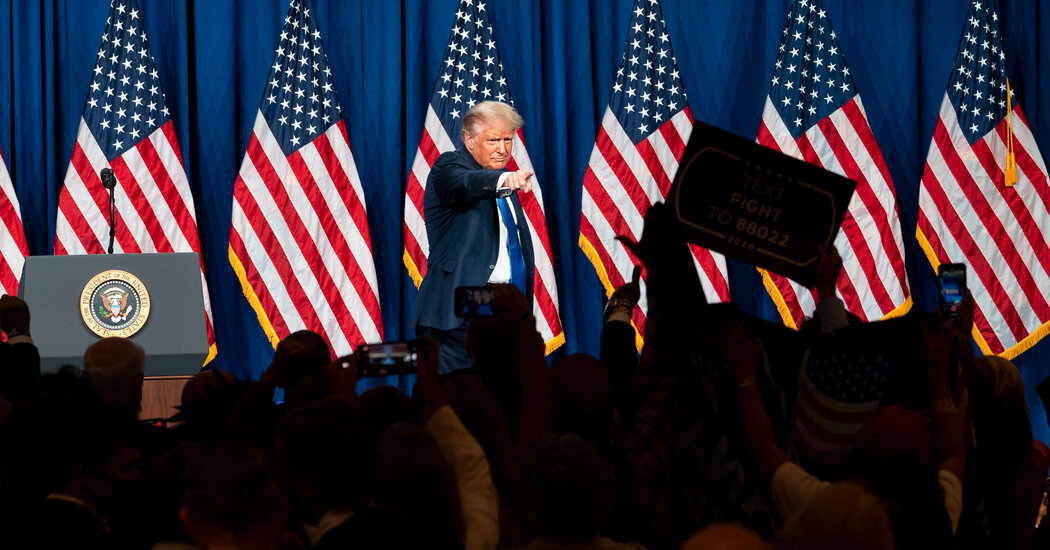 Mr. Trump, his company and some of his associates have long been the focus of investigations overseen by officials in New York. Just this week, the state’s attorney general went to court to force Eric Trump, one of the president’s sons, to answer questions about the Trump Organization under oath.

Here’s what you should know:

The tax returns could shed light on whether any New York State laws were violated when hush-money payments were made in the run-up to the 2016 presidential election to two women who claimed they had affairs with Mr. Trump. The president has denied the affairs.

The office of the district attorney, Cyrus R. Vance Jr., issued a subpoena to Mr. Trump’s accounting firm for the returns last August as part of a criminal investigation.

More recently, Mr. Vance’s office suggested in a court filing that its inquiry also focused on potential bank and insurance fraud by Mr. Trump and the Trump Organization, a real estate company.

Mr. Trump filed a lawsuit last August seeking to block Mr. Vance, a Democrat, from being able to enforce the subpoena, on grounds that a sitting president was immune from criminal investigation. Last month, the United States Supreme Court shot down that argument, but said Mr. Trump could return to the lower court and make other arguments. Then the president’s lawyers raised new objections, claiming that the subpoena was too broad and politically motivated.

A federal judge rejected those arguments last week. The president has appealed.

The New York State attorney general is investigating whether Mr. Trump and his company committed fraud by overstating assets to obtain loans and tax benefits.

Last year, Michael D. Cohen, the president’s former lawyer, told Congress that Mr. Trump had inflated the value of his assets to get loans. That led the attorney general, Letitia James, to investigate the financing of several Trump projects.

If Ms. James, also a Democrat, were to find evidence of criminal offenses, she could refer the case to another law enforcement agency or ask Gov. Andrew M. Cuomo to allow her office to open a criminal investigation.

Ms. James has said the Trump Organization has stalled her inquiry for months and has refused to turn over documents. Last week, the company said it would not comply with subpoenas related to the investigation.

On Monday, Ms. James took the added step of asking a State Supreme Court judge in Manhattan to order the cooperation of Eric Trump, who is an executive vice president of the company.

In response, the Trump Organization’s chief legal officer accused the attorney general of “continued harassment of the company as we approach the election.”

[Did Mr. Trump overvalue his properties? Here’s what we know about the inquiry.]

The authorities in Manhattan have investigated a series of matters involving past and present associates of Mr. Trump’s.

Mr. Cohen, while pleading guilty to having broken campaign finance laws in 2018, admitted in federal court that he had worked with Mr. Trump in 2016 to arrange the hush-money payments.

And last week, Stephen K. Bannon, once the White House chief strategist, was charged in New York with defrauding donors to a private fund-raising effort to build a wall on the Mexican border. Mr. Bannon has pleaded not guilty.

As Summer Wanes in N.Y.C., Anxiety Rises Over What Fall May Bring

What It Took to Get El Chapo Behind Bars for Life

Hundreds of New Yorkers have protested the police shooting of Jacob Blake in Wisconsin. [Gothamist]

New York Fashion Week will go on, but spectators won’t be allowed at indoor shows. [amNY]

And finally: A floating jewel box at Tiffany

Even as other national retailers abandon Manhattan amid pandemic-induced financial struggles, Tiffany & Company is unveiling plans for a shimmering glass jewel box on the roof of its 1940 flagship store at 57th and Fifth.

The three-story addition, its top story distinguished by gently undulating glass walls, will replace an addition of similar height built in 1980 atop the seven-story limestone-and-granite luxury goods store. Demolition of the earlier addition is underway.

This decidedly unfusty architectural stroke by the venerable jeweler, combined with a renovation of the building’s interior, will be the latest iteration of Tiffany’s New York flagship, which has moved uptown five times since its founding in 1837 at Broadway and Warren Street. The revamped store is expected to open in spring 2022, with the company doing business until then out of temporary space next door.

Charles Lewis Tiffany, born in 1812 in Killingly, Conn., opened his first stationery and fancy goods store opposite City Hall Park on the strength of a $1,000 loan from his father. By the 1850s, he had parlayed that stake into one of the country’s foremost jewelry stores.

The new rooftop structure seeks to balance the gravitas of the current building with an airy lightness. Two setback stories with flat glass walls provide separation between the weighty old masonry structure and the 29-foot-tall box with rippling glass walls above it, which appears almost to be floating in air. In architectural renderings, this floating jewel box is illuminated from below with a pale, bluish light that recalls Tiffany’s signature gift boxes, creating an aspirational beacon for the super-wealthy and those who would like to be.

Awoke at my mother’s place in Brooklyn
Cooked myself some Cream of Wheat cereal
Since I have come down with bronchitis
I took some antibiotics and drank tea
Then took a bath using my Aging Hippie bath oil
Went downstairs to pick up The Times and The News
Last night I streamed in Sabbath services
There are some nice female rabbis there
Hanukkah is coming soon enough!
Then I picked up a pen and some paper
and wrote this ode.

New York Today is published weekdays around 6 a.m. Sign up here to get it by email. You can also find it at nytoday.com.

We’re experimenting with the format of New York Today. What would you like to see more (or less) of? Post a comment or email us: nytoday@nytimes.com.