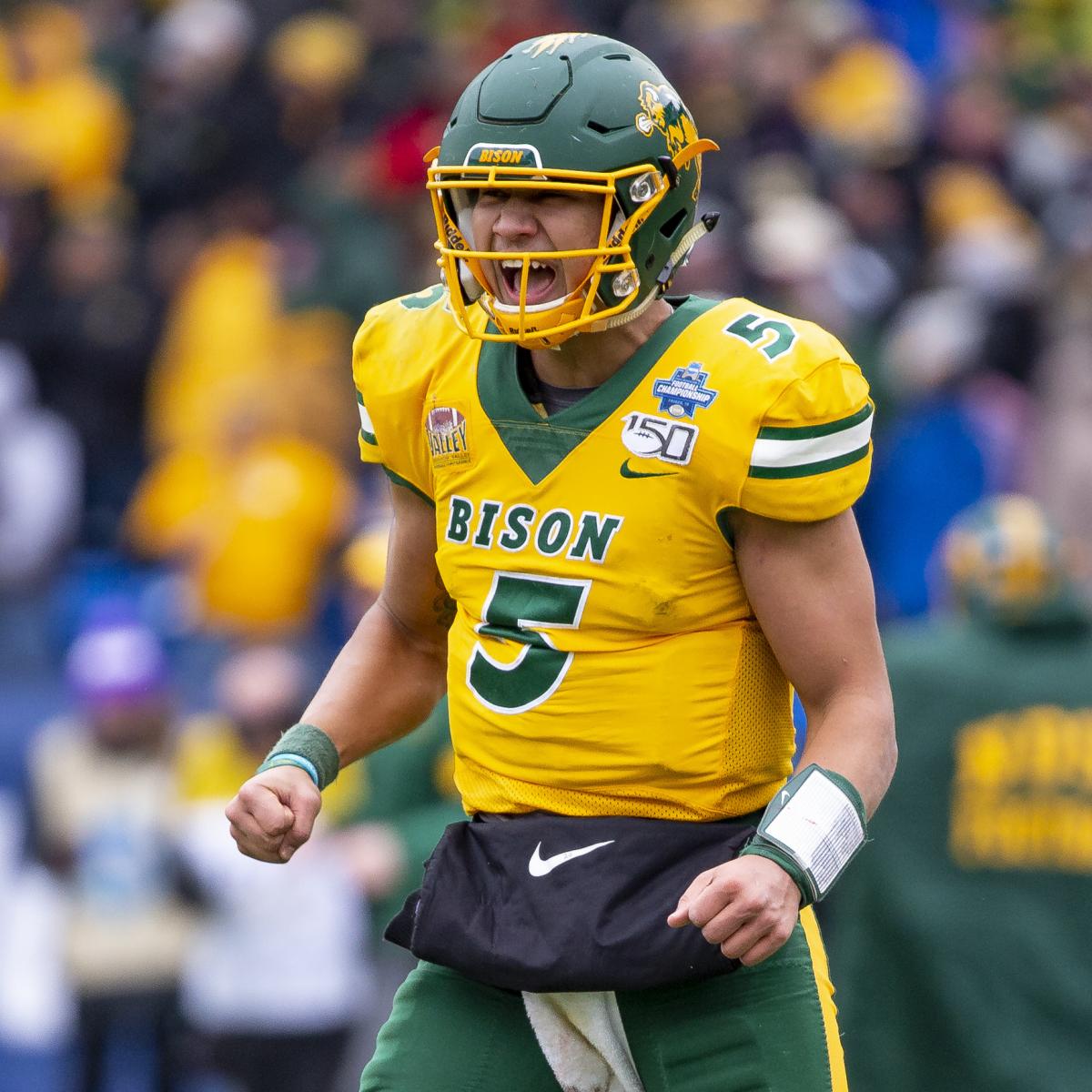 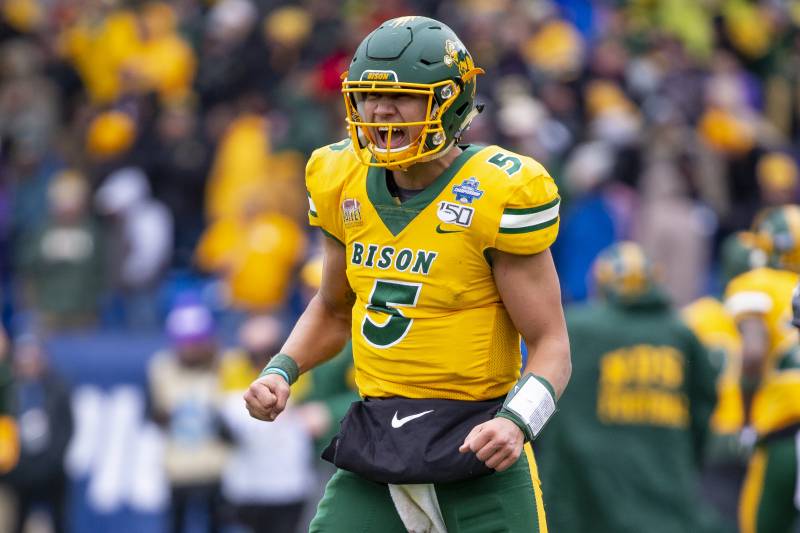 The COVID-19 pandemic has wreaked havoc across every facet of American life—including sports. College football was hit especially hard—two Power Five conferences (the Big Ten and Pac-12) have already canceled fall football. So have so many FCS conferences that the playoffs at that level were postponed…at least.

The lack of fall football has cast the draft prospects of an untold number of players into uncertainty—including arguably the biggest surprise star under center of the 2019 campaign.

And one more shot to show that he deserves to be mentioned alongside Clemson’s Trevor Lawrence and Ohio State’s Justin Fields as the cream of the crop under center in the 2021 draft class.

As Pete Thamel reported for Yahoo Sports, while the Missouri Valley Conference has pulled the plug on fall football, the Bison have signed up to play one game. On October 3, North Dakota State will play host to fellow FCS stalwart Central Arkansas at the Fargodome. 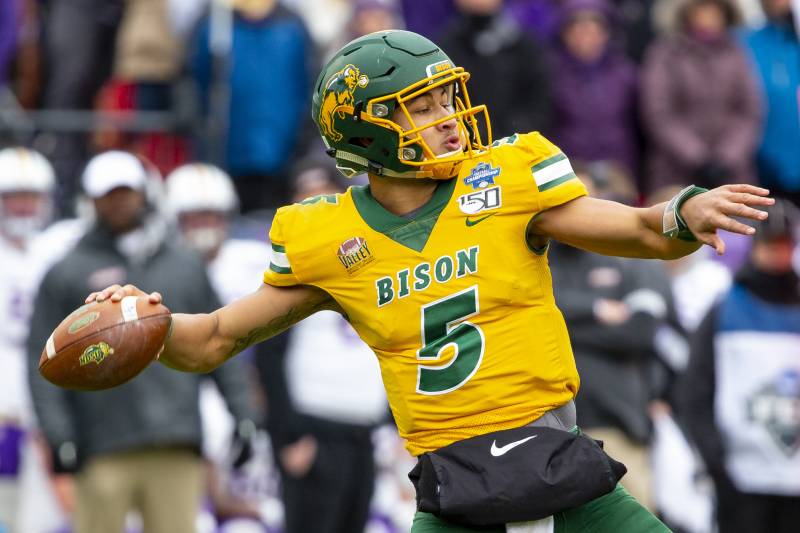 By playing at least one game in the fall, NDSU will be able to practice 20 hours a week, as opposed to the 12-hour maximum mandated by the NCAA for schools who aren’t playing. It could help prevent players from transferring.

And it will give Lance one last shot to show scouts that he is the real deal as a prospect.

At the outset of the 2019 season, Lance was nothing more than a redshirt freshman preparing to make his first career start for an FCS school. There was no stampede of scouts heading to Fargo to check Lance out.

It didn’t take long for that to change.

In Lance’s first start of the season, he threw just one incompletion, rushed for 116 yards and accounted for six touchdowns in a 57-10 demolition of the Butler Bulldogs. In his last start of the year, Lance peeled off a 44-yard touchdown run against James Madison to clinch a national championship and an undefeated season.

All together, Lance rushed for 1,100 yards and 14 scores while passing for 2,786 yards and 28 touchdowns with zero interceptions.

Given those numbers and the success that the Bison had last season, Lance exploded onto the radar of franchises across the NFL. Not only has Lance worked his way into first-round consideration should he (as expected) declare for the 2021 draft, but at least one scout told Thamel that he thinks Lance could vie with Lawrence and Fields to be drafted in the top five. 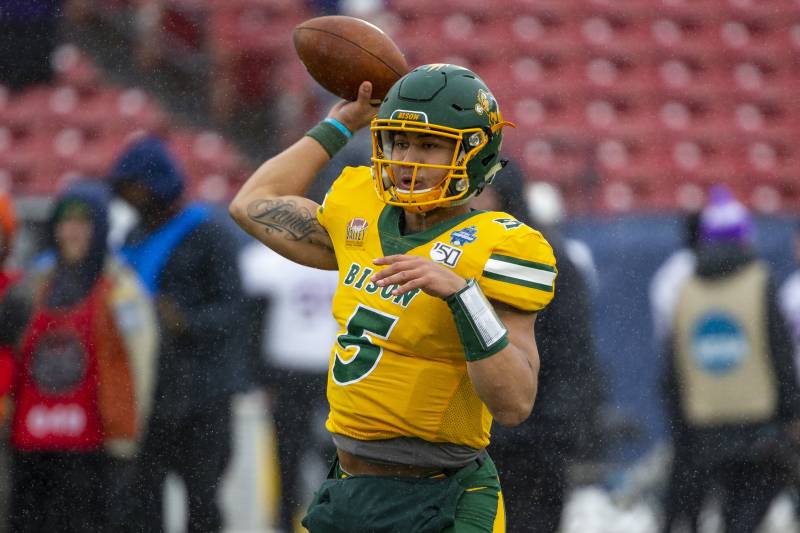 “I’d be shocked if he’s not a top-15 pick,” the scout said. “I think he’s going to be right up in the top five with Justin Fields and Trevor Lawrence.”

“There’s a difference if a quarterback is actually reading a defense as opposed to throwing to open lanes,” the scout said. “He can progress through the first, second and third read and then throw a wheel route to the back out of the backfield. He seems like he’s ultra-smart.”

The draftnik community took note of Lance’s transcendent season as well. In his first 2021 mock draft, ESPN’s Todd McShay slotted Lance to the Chicago Bears with the 14th overall pick.

“Lance is big, athletic and tough, and he absolutely dominated the FCS last season,” McShay wrote. “He threw zero interceptions on nearly 300 pass attempts in 2019 and offered dual-threat production, rushing for 50-plus yards in nine of his 16 games.”

Back in April, Bleacher Report’s own Matt Miller went one better than McShay. He predicted that Lance will be drafted fourth overall by the Carolina Panthers—ahead of Fields.

The Bears and Panthers both brought in veteran quarterbacks in free agency, but both also make sense as teams that could be looking for a young quarterback in 2021. So do the Las Vegas Raiders, who like the Bears have a pair of underwhelming veteran signal-callers on the roster. And teams like the Indianapolis Colts, Detroit Lions and Pittsburgh Steelers, who have aging, highly paid starters, do as well. 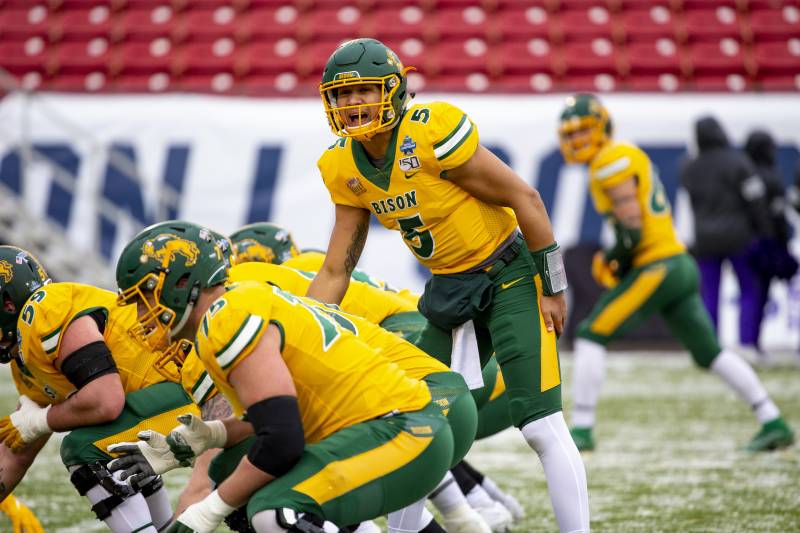 There won’t be any shortage of eyes on the Fargodome on October 3. And that presents Lance with a golden opportunity to jockey for position in the 2021 draft.

After what he’s accomplished during his time at Clemson, Lawrence is the overwhelming favorite to be the first quarterback taken in 2021. And the first pick overall. That would be the case even if the Tigers sat out fall football. But with the ACC on track to play in 2020, Lawrence will have the opportunity to erase any slivers of doubt about who the top signal-caller in the class of 2021 is.

But Fields, for all he accomplished in Columbus last year (3,273 passing yards, 41 touchdowns, three interceptions), may not get a chance to prove himself against live competition this season, as the Big Ten won’t be playing football until at least spring of 2021.

For the record, the odds of Fields, Lance or any other first-round prospect jeopardizing their draft stock just before April’s 2021 draft by playing spring ball is approximately 0 percent. It ain’t happening—nor should it.

Lance, however, will get one last shot against a Central Arkansas team that went 9-4 last year and made the playoffs to show what he can do in live game action. And as one director of player personnel told Thamel, there’s no replacement for that.

“You always want to see quarterbacks throw live,” he said, “and this would be the only chance to see him throw [in college this year].”

It’s possible if Lance plays well in that game (and there’s no reason for the Bison not to build the game plan for the contest around making him look good) that he could shoot past Fields on some draft boards.

And in the top 10, every draft slot can make a seven-figure difference on a rookie contract.

This has been a rotten year to be a college football player. Things went from bad to worse to no football at all for many—at least not in 2020.

But with the scheduling of this game, Trey Lance and the other players for North Dakota State finally caught a break. One last chance to take the field and demonstrate for NFL scouts what they can do.

Now it’s just a matter of taking advantage of it.