Booking Holdings CEO Glenn Fogel on Wednesday urged Congress to provide support to the airline industry, suggesting failure to act soon would prevent a swift recovery in travel after the coronavirus situation improves.

“I do believe the travel industry will come back. As soon as it’s safe to travel, people will start traveling,” Fogel said on CNBC’s “Squawk Alley.” “It’s really a function of how fast it will come back and how much damage to the industry. I see no reason that we should have to wait extra years because we took time putting money to work now.”

Fogel’s comments came shortly after a spokesman for House Speaker Nancy Pelosi said the California Democrat had spoken with the White House’s lead stimulus negotiator, Treasury Secretary Steven Mnuchin, about a standalone bill to provide aid to the airline industry. 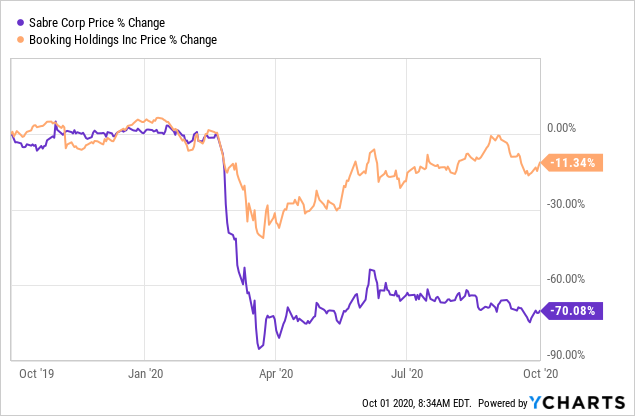 Booking Holdings (BKNG) and Sabre (SABR) are two leading companies in the travel reservation industry. Booking focuses more on consumer buying as the top third-party vacation/destination/hotel/airline/cruise/car rental marketer and online technology reservation company through its Booking.com and priceline.com websites. Sabre, a spin-off of American Airlines (AAL) in 1999, mainly works with businesses on ticketing/reservations to match air travel, local transportation and hotel needs. They both have suffered during the travel recession this year. Sabre revenues are expected to slide -60% in 2020 due to the pandemic economic shutdown, with Booking sales backpedaling -50%. However, the similarities end there.

Booking’s super-high profit margins and cash position are projected to keep the company profitable during the year, while Sabre’s excessive leverage and low margins are producing huge operating losses. I wrote a bullish article on Booking in July explaining the company as the smartest, low-risk way to play a slow rebound To accommodate waitlisted passengers, Indian Railways plan to start running “clone trains”, which would be trains that will run on those routes where trains have waitlisted tickets for a week or ten days. Some of these trains that will be subsequently notified will run ahead of the existing trains and may also stop at a lower number of stations. Railway Board Chairman and CEO VK Yadav said this to reporters in a web-based conference on Saturday.

Indian Railways, which had stopped running passenger trains in the last week of March after COVID-19 prompted lockdown re-started passenger services from May 1. It was running 115 pairs of trains.

BERLIN (Reuters) – Berlin travel-booking app Omio said on Wednesday it had raised $100 million in backing to expand its business and make acquisitions as the industry recovers from the blow dealt by the COVID-19 pandemic.

At the height of the viral outbreak, Omio went into “keep-the-lights-on” mode and put 90% of its staff on furlough, founder and CEO Naren Shaam told Reuters, but its team of 350 is now working again at full strength.

The company, which offers travel search and bookings for flights, trains, buses and other forms of transport, said it was seeing a shift away from air towards ground travel.

That shift supports margins, but purchases and distances travelled are smaller, said Shaam. More people are also booking at the last minute, putting a premium on the flexibility offered by its smartphone app, he added.

TOKYO, Aug 7 (Reuters) – SoftBank Group Corp 9984.T is seen booking a 75% first-quarter profit plunge on Tuesday, albeit making a return to profitability, as the coronavirus outbreak continued to weigh on the tech bets of CEO Masayoshi Son’s $100 billion Vision Fund.

The Japanese conglomerate is expected to record operating profit of 171 billion yen ($1.62 billion) for April-June, showed the average of three analyst estimates compiled by Refinitiv. That would compare with 625 billion yen in the same period a year earlier.

GRAPHIC: SoftBank and the Vision Fund