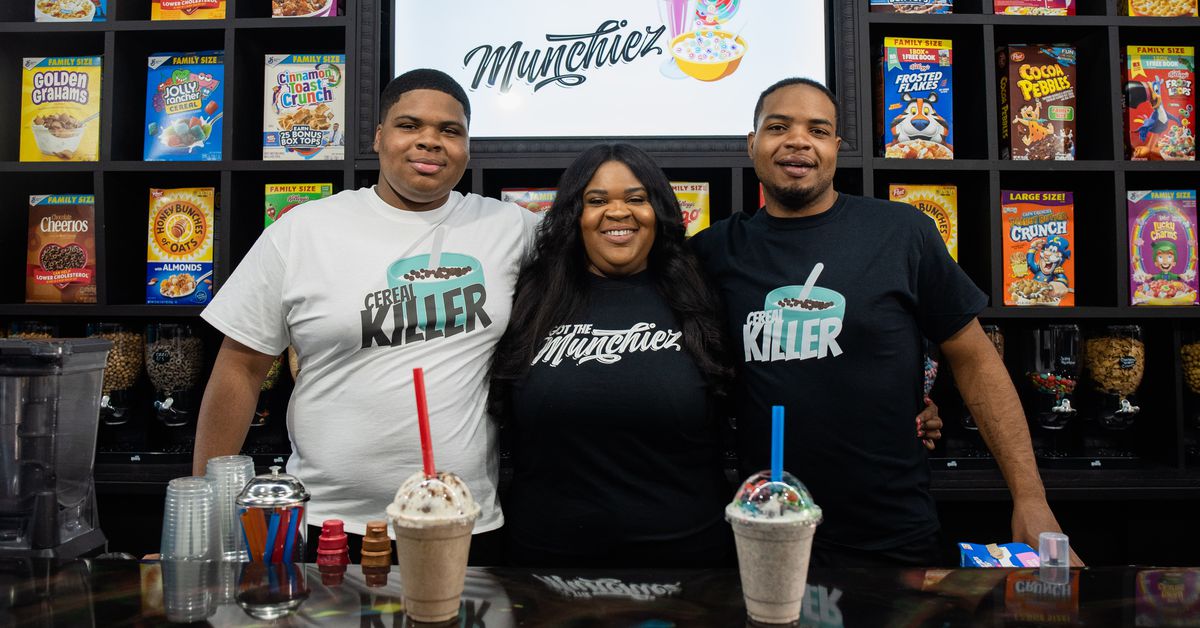 As South Side businesswoman Qiana Allen viewed cell phone app footage of looters breaking into her Beverly-based clothing boutique in May, she knew she had to take matters into her own hands.

“I was upset. I was furious. I was hurt,” said Allen, of her temporarily closed Culture’s Closet clothing store at 2147 W. 95th Street, that caters to full-figured women. “It was a huge thing, and I felt like those boys didn’t have any guidance to show them that this wasn’t the right [way to express anger].

“As time went on and I understood that these [protestors] didn’t have that leadership. I definitely want to [foster support] so my boys didn’t make the same mistake. … I noticed they learned a lesson from that as well, so I’m just grateful that we were able to start this business together so that they can have an outlet and not have to resort to the street.”

Soon after, Allen told her sons, Keenan and Kameron Cole, that she was going to open Munchiez (1803 W. 95th Street), a novelty candy store and cereal bar, and make them part owners and co-workers alongside her.

Allen not only wants to keep her boys out of trouble, she wants to help them acquire entrepreneurial skills along the way, she said.

“I’m definitely trying to show them hard work, dedication, and ambition. But they’re both taking the initiative to do certain things that will make the business grow. And those are the things that I’ve definitely want to make sure that they take with them for the rest of their lives as they grow into young men and become their own people.”

Kameron Cole, 15, is aware of his status as a teenage entrepreneur. He says his favorite item to prepare at the eatery is the Walking Taco.

While most 15 year olds are hanging out with their friends or looking for likes on Instagram, Kameron is all about learning entrepreneurship skills.

“I’m good with customers, but at first, I was nervous. I like to serve customers and make sure that they are alright,” said Kameron Cole.

Kameron’s older brother and business partner, Keenan, says the main lesson he’s learning from working with the family is patience.

“My mom hasn’t really stressed that yet, but I can see it,” said Keenan Cole. I’m only 20 years old, and all that I’ve seen my mom do is be patient. ‘Don’t rush them’ she would say. And it was natural. If it’s not your direction, then don’t go that way.”

Make no mistake, mom is in charge at home, too.

“Being an entrepreneur and mother at the same time it’s been interesting; they know that I’m the boss whether we’re at home or here so that they respect me in all aspects,” said Allen, an alumna of Chicago High School for Agricultural Sciences. “And because they’ve actually been through the journey with me and have seen how I’ve grown as an entrepreneur, they feel this is a new thing just for them. But respecting me as a mother and their boss has not been a challenge.”

If her sons want to pursue a different career as they get older, Allen says they have the option of maintaining an ownership stake in the business, or they can be bought out.

And what advice does Allen have for parents who want to expose their children to entrepreneurship?

“I just want to encourage other people who have aspirations of becoming entrepreneurs to keep going no matter what the circumstances are and what they’re faced with,” said Allen, who plans to reopen Culture’s Closet. “If they have a dream or desire to become something greater, go for it.”