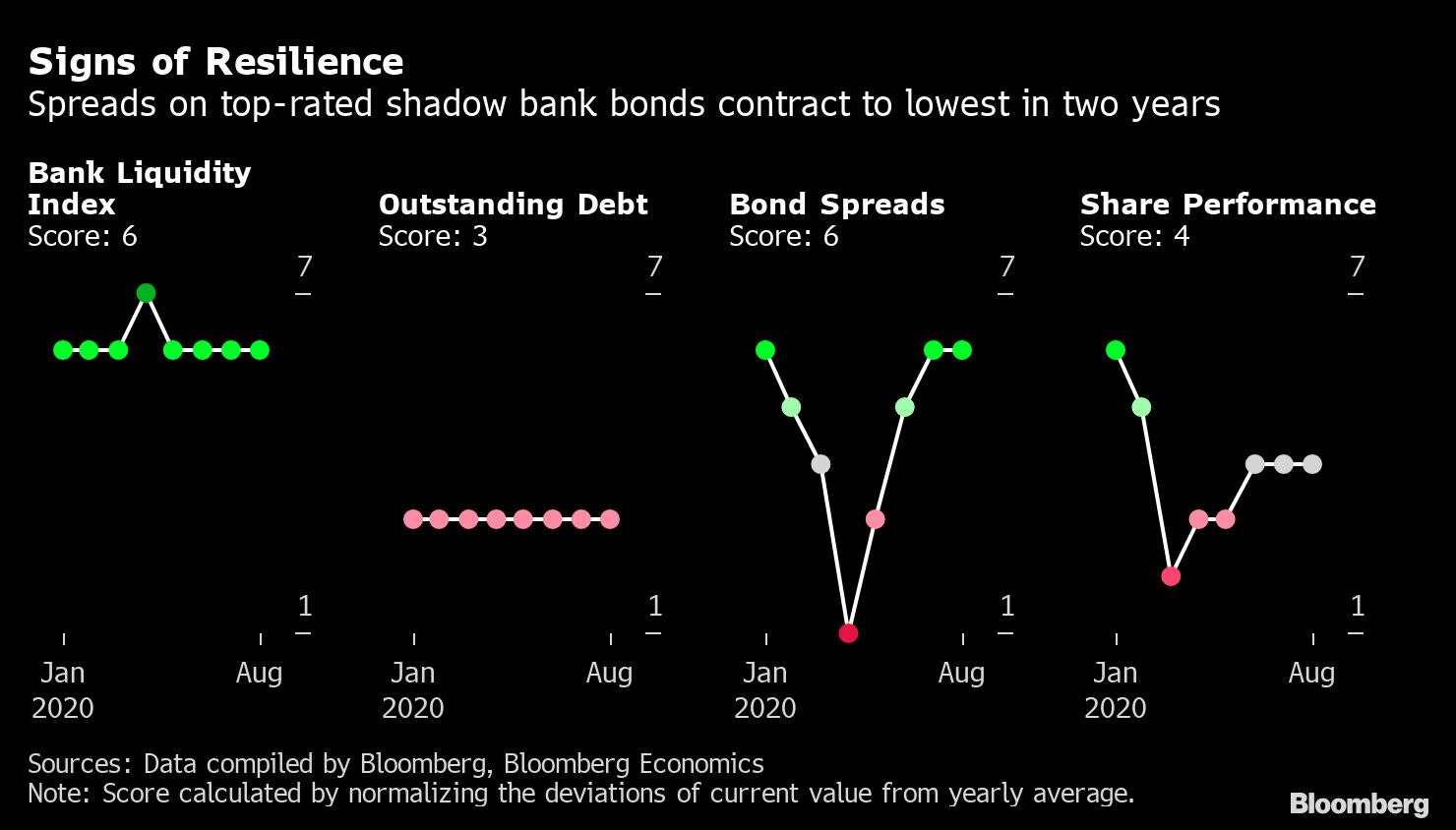 Shadow Banks Ride Out the Crisis While Virus Ravages India

(Bloomberg) — The health of India’s shadow banks remained resilient in August, suggesting that record stimulus steps by the nation’s authorities are helping the crisis-hit sector ride out the pandemic.

Premiums on non-bank lenders’ bonds narrowed to a two-year low, according to an index of AAA rated five-year notes. Three other indicators compiled by Bloomberg, covering areas including liquidity and share performance, stayed steady from the previous month, with two at levels indicating strength.

India’s non-bank lending sector was hit by a crisis in 2018 when a large financier unexpectedly defaulted, and the nation now needs it to stay healthy in order to prevent gross domestic product from shrinking further. The reach of shadow banks extends into many corners of the economy, as they lend to a wide range of businesses from road-side teashops to tycoons.

Reserve Bank of India is monitoring the country’s 100 non-bank lenders “rigorously” to avoid another shadow banking crisis, Governor Shaktikanta Das said on Wednesday, adding the regulator will ensure financial stability is maintained and that no major shadow lender will fail.

The central bank is propping up the industry, announcing some 100 billion rupees ($1.36 billion) of special liquidity last month to organizations that fund mortgage lenders and housing finance companies, and permitting banks to restructure some loans. This follows a 750-billion-rupee special credit line provided to non-bank financiers by the government in May.

But the cash influx from the authorities hasn’t dispelled concerns among investors about non-bank finance companies, known as NBFCs. There are worries that bad debt will rise in the sector as the lockdown to curb the spread of the coronavirus has battered the nation’s businesses and left millions jobless.

“The funding challenges for NBFCs could mount again, especially for smaller NBFCs, on the back of Covid-19,” Sanjay Agarwal, senior director at Care Ratings, said in a note last week, as loan collections at shadow lenders declined after the central bank allowed a six-month moratorium on repayments.

The Bloomberg check-up of the sector’s health also showed that:

The scores attached to each of the indicators have been calculated by Bloomberg by normalizing the deviation of the latest value of the indicator from its yearly average. They are assigned on a scale of 1 to 7, with 1 implying weakness and 7 showing strength.