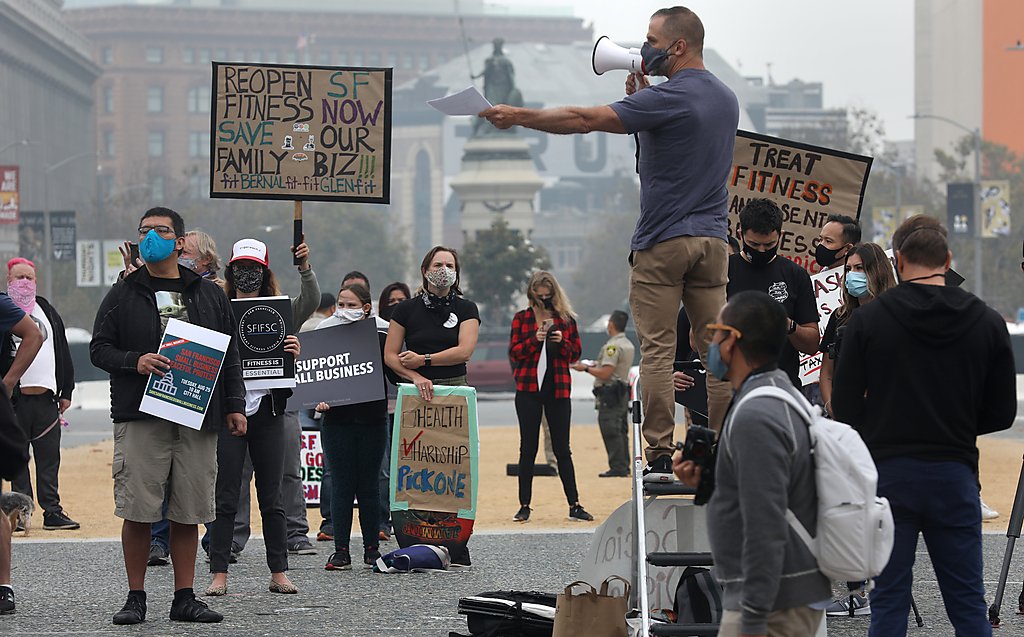 Masked and separated, leaders from industries unable to reopen since the mid-March shelter-in-place detailed financial hardship that have some businesses on the verge of complete collapse amid the coronavirus pandemic.

“None of us want to be out in the middle of a pandemic,” said MX3 Fitness co-owner Dave Karraker, whose two gyms have had to lay off 10 people and amassed more than $20,000 in debt since March. “None of us want to be out here in this air quality. None of us wanted to have to call grandma and ask her to watch the kids for a couple of hours, because I’ve got to go to down to City Hall and beg them to save my business. Unbelievably, they’re not watching as one business goes under. They’re watching any entire business sectors collapse.”

According to Yelp, more than 2,000 Bay Area businesses were marked as permanently closed between March and July 10. Lending Tree found in a study this month that San Francisco small businesses had the fifth-grimmest outlook among all major U.S. cities — besting only Austin, San Antonio, San Jose and New York.

Many of those shuttered have been small businesses. 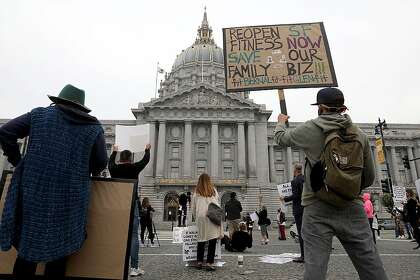 Commercial real estate agent Stu Gerry has represented 116 San Francisco small business owners in negotiations with landlords since mid-March. He said 7% closed for good in July, the number bumped to 33% this month, and he expects it to balloon to 90% soon.

Business owners carried signs that included “If masks work, let us work” to “Open now or close for good” to “Feeding my child is essential business.”

The group included owners of fitness, personal care and nightlife businesses, which are forbidden from opening indoor operations as San Francisco remains on the state watch list. A timeline for reopening is unclear, but Gov. Gavin Newsom said he plans to release guidelines this week.

The protest drew Supervisors Matt Haney and Rafael Mandelman from City Hall outside to address the crowd.

“Just because we’ve been put on the watch list, it does not mean that we get to stop working on the problem,” said Mandelman. “Let’s let people know when, if and how we’re going to reopen, and if the answer is going to be ‘no’ for some set of folks, let them know that. Then, people can make reasonable choices and move forward.”

More than a month since the pause, business owners expressed frustration and pleaded for more aid. The city has loans and grant programs for businesses affected by coronavirus, but applications are closed for many programs.

Billy Polson and the 86 independent fitness trainers who work out of his gym, Diakadi, have been limited to online and outdoor sessions. “We’re exhausted,” he said. “We’ve got to get some help, if we have any chance to survive.”

Locals Barbershop owner Gabe Sandejas said his business has mostly relied on donations he received at his father’s funeral in March. “I came to realization that I’m considered a number, a number from the unfortunate group that has been severely impacted and a number from the group that is still being kicked while we’re already on the ground,” he said.

Craig Joyner, who has owned Great Tan for 28 years, said his Payroll Protection Program money ran out in mid-July. He has nothing left to pay landlords at his Union or Castro salons, and he said his employees are talking about moving out of the city.