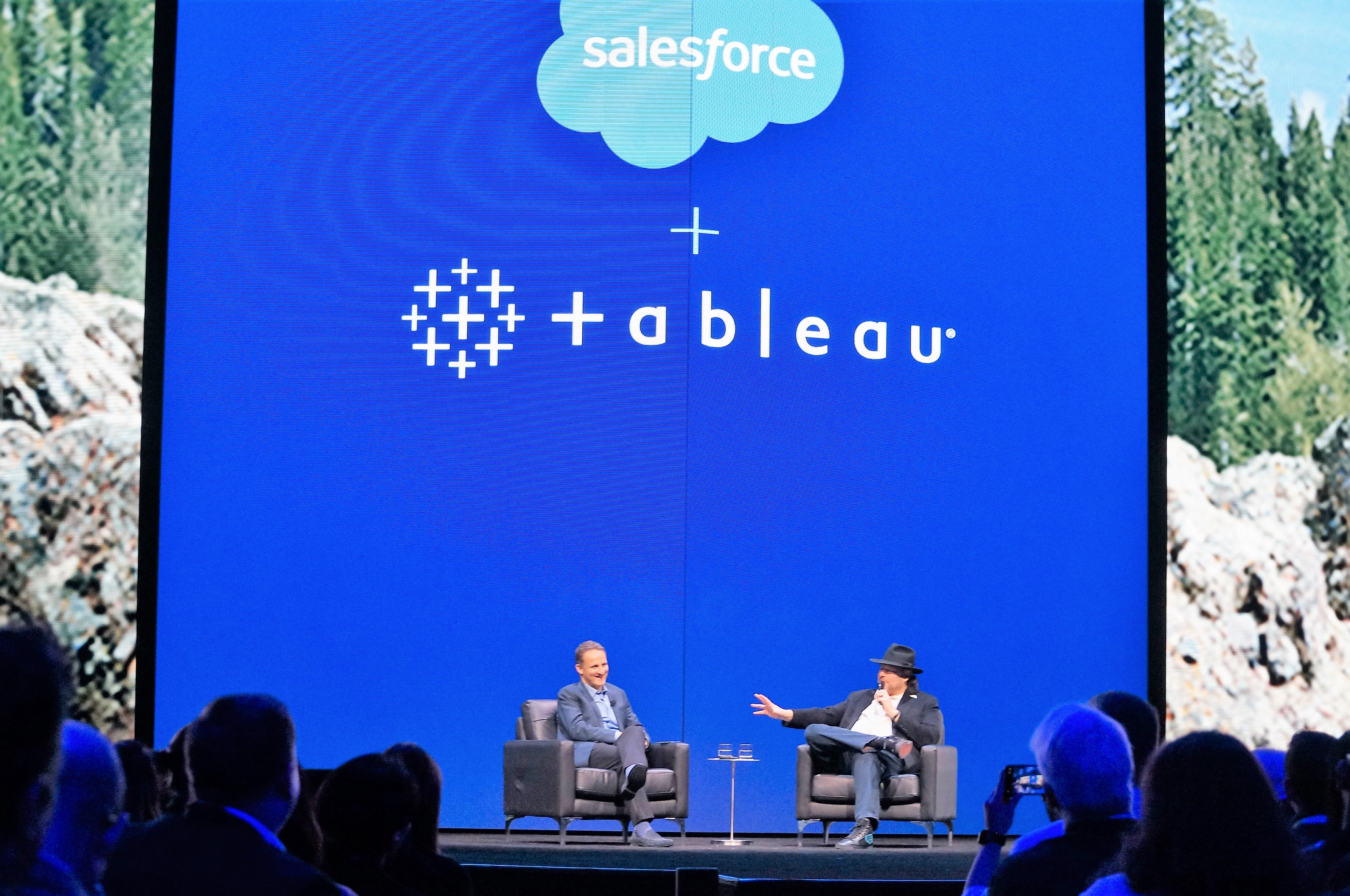 Salesforce cuts 1k jobs, including some at Tableau, vows to keep hiring while ‘reshaping’ company

Salesforce is cutting jobs after reporting record earnings, creating “shocked disbelief” inside the company, one newly laid-off Seattle employee tells GeekWire. The cuts, announced internally on Tuesday and Wednesday, involve about 1,000 jobs, or 1.8% of Salesforce’s workforce, according to Bloomberg News and CNBC.

Current and former employees say the layoffs include an unknown number of employees at Seattle-based data visualization company Tableau Software, which was acquired by the San Francisco-based customer relationship management and cloud technology company a year ago for $15.7 billion.

“We’ve had to make tough decisions when it comes to allocating resources and reshaping the company around our strategic growth areas to continue our momentum into the second half and beyond,” wrote Marc Benioff, the Salesforce co-CEO and co-founder, in an internal memo to employees, without explicitly referencing the job cuts.

It’s important to make sure that all of our resources are aimed at the most important opportunities for our customers.

In an interview with GeekWire on Tuesday afternoon, before word of the layoffs started to emerge, Tableau CEO Adam Selipsky said the company is continuing to hire in areas including sales, product development and marketing. The pandemic has accelerated the digital transformation at many large companies, fueling new demand for technology including data analytics and visualization.

At the same time, Selipsky said, the ongoing uncertainty in the global economy also calls for a prudent approach.

“It’s important to make sure that all of our resources are aimed at the most important opportunities for our customers,” Selipsky said. “We’re putting real time and focus into making sure of that. At the same time, we’ve continued to open up new headcount.”

Selipsky said Salesforce and Tableau remain committed to growing in the Seattle area. Benioff called the region the company’s “HQ2” when he announced the acquisition a year ago.

The job cuts were a surprise to some employees, particularly following Salesforce’s record quarterly earnings. The company’s stock soared 26% in trading on Wednesday following the financial report.

“Based on the near-record revenue numbers, and all of the other positives Marc Benioff spoke about, doing a layoff of this scale and scope, during a global pandemic seems abjectly unconscionable,” said Vanya Tucherov, a Tableau employee of more than 10 years whose role in testing and quality assurance engineering was eliminated as part of the layoffs.

Tucherov said via email, “Particularly since Salesforce so proudly professes a commitment to Trust and isn’t shy about culturally appropriating the Hawai’ian term ‘Ohana’ to describe the relationship it wants to have with its staff and customer base, the juxtaposition of layoffs under these circumstances seems to indicate that we’re valued as family as long as we’re not perceived to have an adverse impact upon the payable side of the ledger. This is not how one treats family, nor how a company builds trust with its employees.”

“Shocked disbelief seems to be the consensus reaction, both from the people whose positions are being terminated and those who remain,” Tucherov wrote.

Tucherov said the support he has received from his former colleagues has been “amazingly positive.” Tucherov acknowledged the industry trends toward automation in software testing but said many inside the company “understand the value of having experienced customer advocates to validate that the user experience is as close to the experience we’d want our customers to have as possibly.”

Salesforce declined to confirm the total number of people impacted by the cuts. The company employed 54,255 people as of July 31, which puts the 1,000 reported job cuts at 1.8% of its workforce.

A company spokesperson said in a statement, “We’re reallocating resources to position the company for continued growth. This includes continuing to hire and redirecting some employees to fuel our strategic areas, and eliminating some positions that no longer map to our business priorities. For affected employees, we are helping them find the next step in their careers, whether within our company or a new opportunity.”

Tableau is part of its “Platform and Other” category, which grew to $1.5 billion in quarterly revenue from $912 million the year before, up 66%. Tableau was responsible for 41 percentage points of that growth, said Mark Hawkins, the Salesforce president and chief financial officer, on the company’s earnings call.

Benioff had pledged that the company would make no major layoff for three months in March, amid the economic uncertainty of the initial spread of COVID-19. Tableau employed more than 4,200 people worldwide at the time of the acquisition announcement last year.

Layoff notices started going out Tuesday afternoon, and were expected to be completed this afternoon, prior to a Salesforce all-hands virtual company meeting.