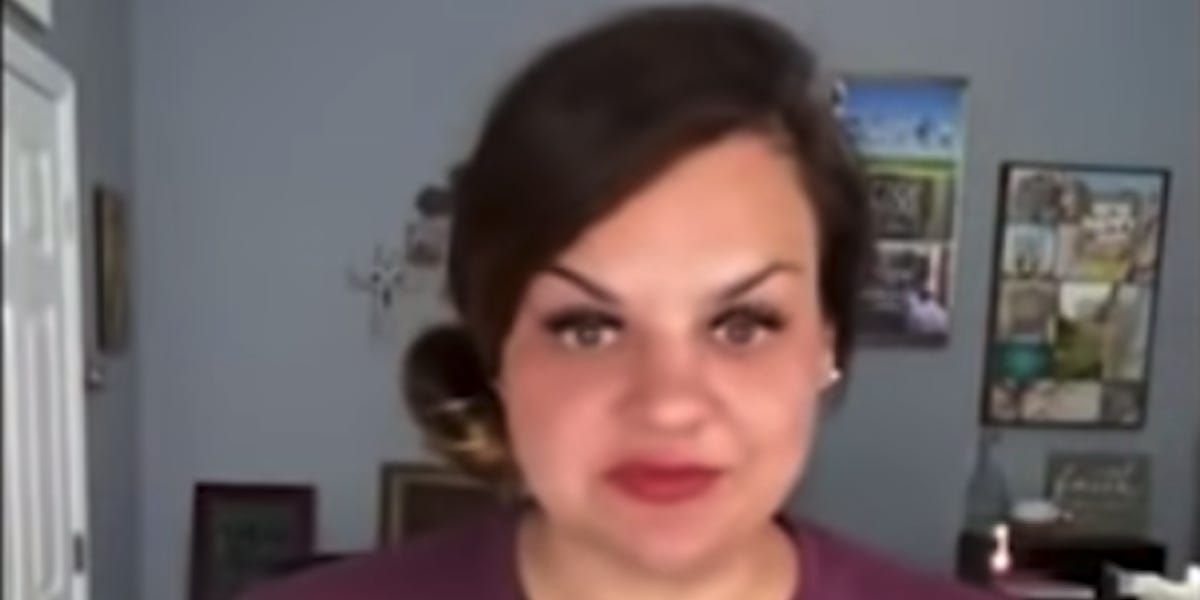 Abby Johnson, an anti-abortion activist with a top speaking spot on the second night of the Republican National Convention, in a video posted to YouTube in late June condoned police racially profiling her adopted, biracial son.

“Statistically, my brown son is more likely to commit a violent offense over my white sons,” Johnson said in the video, which was reported by Vice News.

“I recognize that I’m gonna have to have a different conversation with Jude than I do with my brown-haired little Irish, very, very pale-skinned, white sons, as they grow up,” Johnson said.

She described her son Jude as “an adorable, perpetually tan-looking little brown boy.”

“But one day, he’s going to grow up and he’s going to be a tall, probably sort of large, intimidating-looking-maybe brown man. And my other boys are probably gonna look like nerdy white guys,” Johnson added.

Johnson in the video appeared to defend the disproportionate rate at which Black men are arrested and incarcerated for crimes, ignoring the centuries of history and racist policymaking that led the US to this point.

“Statistically, I look at our prison population and I see that there is a disproportionately high number of African-American males in our prison population for crimes, particularly for violent crimes. So statistically, when a police officer sees a brown man like my Jude walking down the road — as opposed to my white nerdy kids, my white nerdy men walking down the road — because of the statistics that he knows in his head, that these police officers know in their head, they’re going to know that statistically my brown son is more likely to commit a violent offense over my white sons.”

Johnson went on to say that it “doesn’t actually make me angry” that a police officer “would be more careful around my brown son than my white son.”

She said that makes the officer “smart” because of “statistics.”

At another point, Johnson said she would be angry in an instance in which police treated her “brown son violently, more violently than my white son.”

Johnson’s video first went up in June amid nationwide protests over police brutality. It was initially reported by the conservative outlet Daily Caller, and has since gone private, per Vice News.

Johnson told Insider she has no regrets about sharing the video or the sentiments expressed within it.

“I only made it private because of violent threats that were being made against my family,” Johnson said. “You know, from the ‘tolerant left.'”

As Insider previously reported earlier this summer amid widespread protests following the brutal death of George Floyd at the hands of Minneapolis police:

In the US, where Black people are disproportionately incarcerated and killed by police, researchers have found widespread evidence of systemic racism in policing.

Data on policing in Chicago found that even though white people were statistically more likely to resist arrest, police used more force against Black citizens than any other race on average.

A Northeastern-Harvard study released in April, for example, found Black Americans are at greater risk of being killed by police, even though they are less likely to pose an objective threat to law enforcement. Researchers looked through shooting deaths by police across 27 states in 2014 and 2015 for the study, which was based on details from police and medical-examiner reports by the National Violent Death Reporting System.

“One in 15 firearm deaths is at the hands of police; among African-Americans it’s about one in 10,” Northeastern professor Matt Miller said in a report on the study. “Which isn’t to say that these shootings are all unjustified. But it sure makes you feel like we should try really hard to figure out how to use less lethal ways of arresting someone’s threatening behavior.”

Opponents of the Black Lives Matter, including white supremacist groups, will often cherry-pick statistics on crime and homicide to misleadingly present Black people as inherently criminal and violent against whites. The sentiments Johnson shared in the YouTube video echoed these racist tropes in defense of racial profiling by police, including in a hypothetical scenario involving her biracial son.

Studies show that local news disproportionately characterizes Black people as perpetrators of crime while portraying white people as victims. But Black people actually are far more likely than other races to be the victims of violent crime in the US, which remains fairly violent compared to other developed countries.

“Research has found that many young black men — the group most likely to be perpetrators and victims of gun homicides — suffer from a condition similar to PTSD, brought on by repeated exposure to violence, extreme poverty, high unemployment, drug and alcohol abuse and other social ills that create a sense of hopelessness,” Shirley Carswell, lecturer at Howard University, wrote in the Washington Post last month.

“When white men respond to their life circumstances with gun violence, it’s treated as a public health problem,” Carswell added. “When black men do, it’s portrayed almost solely as a criminal issue, caused by lawlessness and moral failing.”