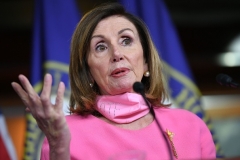 Pelosi: Trump ‘Wants His Name on a Letter to Go Out With a Check In It’

(CNSNews.com) – House Speaker Nancy Pelosi (D-Calif.) explained on Sunday why Democrats returned to Washington this past weekend to pass a stand-alone emergency funding bill for the U.S. Postal Service but refuse to compromise with Republicans on emergency assistance for Americans slammed by the economic fallout from the pandemic.

“All the president wants is this one thing. He wants his name on a letter to go out with a check in it. And he doesn’t care about the rest of it, about the coronavirus funding, about the state and local, which really fund our schools,” Pelosi told CNN’s “State of the Union.”

Host Jake Tapper noted that “there are some areas of common ground between Democrats and Republicans. If you’re willing to vote on a solo post office bill, why not reach a deal on some of these other issues where there is agreement? Surely, passing something to provide relief for struggling Americans is better than nothing.”

What he (Trump) put forth was bare leaves. He didn’t mention the fact that millions of children in our country are food-insecure, that millions of people on the verge of eviction, that he did nothing to address the actual coronavirus, more testing, tracing, treatment, et cetera, that they are ignoring the needs of state and local government.

And all of this comes down to the education of our children. They don’t want to do enough for that. And what they want to do is not the right path.

So, again, he’s putting out that to say — and, by the way, what the president has said, if you give me this, I’m not doing anything else.

We cannot accept that, not when kids are hungry, kids want to go to school, people need housing. The list goes on. Of course, they don’t want to do anything about the election, the $25 billion that would go to the Postal Service.

And that’s not about the elections only. It’s about the coronavirus. It’s about the nearly 100 percent of the prescriptions that go through the mail from VA for our veterans are affected by this and delayed by the actions of the Postal Service.

So, this is an emergency, immediately. And it’s something that should be bipartisan. And it was yesterday. The public is demanding action on this now. I can’t see how the Senate can avoid it, unless they do so to their peril.

But don’t be misled by bare crumbs — and I don’t say crumbs, but the bare leaves that this administration wants to put out.

All the president wants is this one thing. He wants his name on a letter to go out with a check in it. And he doesn’t care about the rest of it, about the coronavirus funding, about the state and local, which really fund our schools.

Democrats criticized Trump for putting his name on the first round of coronavirus relief checks — the paper checks of up to $1,200 that were mailed to some Americans in April.

The White House has said it is willing to give $10 billion in emergency funding to the postal service while it reforms its business practices. “I know that’s less than the $25 billion you passed last night, but that’s something,” Tapper told Pelosi.

Tapper also noted that “almost half of the Democratic Caucus signed a letter this week calling on you to pass a stand-alone unemployment insurance bill. And a number of the most vulnerable Democrats are urging you to restart negotiations.”

He asked her how long Democrats will “stand together” if the stalemate continues:

“My caucus is standing together on this,” Pelosi insisted:

Of course, we all want the negotiations to continue, but not just what the administration wants, but what the country needs.

Today marks the 100th day since we passed the HEROES Act, so-called, to support our health care workers, our teachers, our first responders, our transportation, our sanitation, our food workers.

And the White House says — what they say to us is, why should one state help another state that may have needs? Well, we welcome them to the United States of America.

So, again, when we go to putting money into people’s pockets, as the president wants to do with that letter, we have to do so, not in a bread and circuses way — I’m going to give you this, but I’m not giving you anything else.

This is like ancient Rome. Trump fiddles while Rome burns, while America burns, and Trump gives bread and circuses, without the bread. So, we will see the circus this week with his convention, well-introduced by the words of his own family as to his lack of character and integrity.

Also See:
Chief of Staff Meadows: So Many People Hurting, but Dems’ Bill Deals Only With Post Office