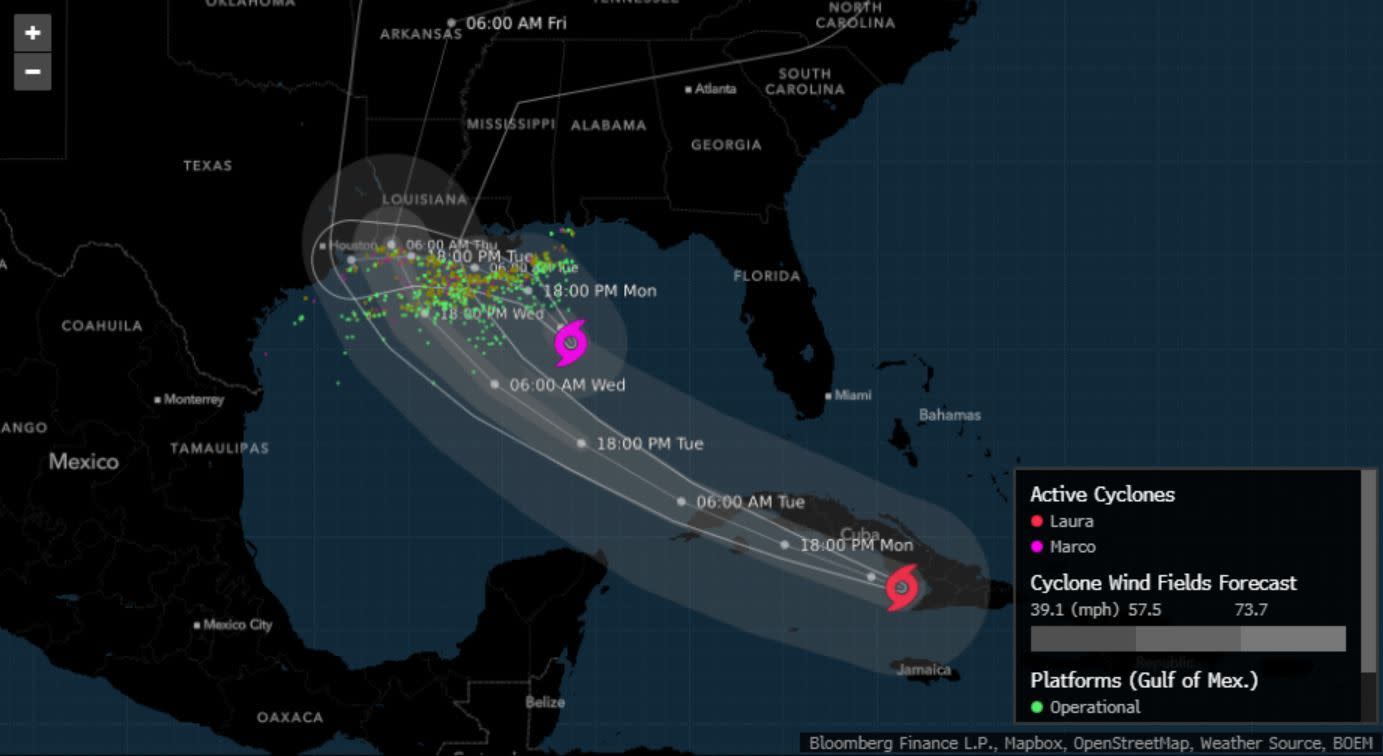 (Bloomberg) — Tropical Storm Laura is poised to become a hurricane before making landfall Thursday, posing a threat to oil and gas infrastructure on the Gulf Coast.

A hurricane watch has been posted from Port Bolivar, Texas, to west of Morgan City, Louisiana, in anticipation of Laura’s arrival, the National Hurricane Center said in an advisory at 5 p.m. New York time. Forecasts are split on whether Laura becomes a major hurricane with winds in excess of 111 miles (179 kilometers) per hour or not. Another storm, Marco, lost so much power as it approached the coast that it will likely fall apart.

“Laura is forecast to reach the northwestern Gulf Coast as a hurricane late Wednesday and early Thursday,” Dan Brown, a meteorologist at the center, wrote in his forecast. “Do not focus on the details of the official forecast” given uncertainty in predictions to three days out, he said.

Laura’s winds will be at least 105 mph, making it a Category 2 hurricane, but the storm could reach Category 3 strength on the five-step Saffir Simpson scale.

The tropical threat has already prompted 82% of oil output and 57% of natural gas production in the Gulf of Mexico to be shut, according to the Interior Department’s Bureau of Safety and Environmental Enforcement. If Laura becomes a Category 3, it would be the first major Atlantic hurricane of 2020.

Gulf Coast refineries and petrochemical plants are often located in low-lying areas vulnerable to flooding. In 2017, an Arkema SA chemical plant about 25 miles (40 kilometers) east of Houston had a fire and explosion after it was flooded by Hurricane Harvey. In September, Exxon shut its Beaumont refinery in Texas because of flooding from Tropical Storm Imelda.

Laura almost certainly won’t be as damaging as Harvey, however. Harvey hit Texas as a Category 4 storm and then got pinned in place by larger weather patterns, causing it to send record rains across the eastern half of the state for days. Laura may pack a severe punch at landfall, but it will quickly exit the area, reducing the potential for lingering effects. The last hurricane to hit Texas was Hanna, just under a month ago.

Energy platforms in the Gulf of Mexico that account for as much as 17% of America’s oil production and about 3% of gas output are designed to withstand storms of this magnitude; they regularly shut and restart as systems pass through.

Laura could cause problems for refineries and fuel-distribution hubs from Houston to Louisiana, said Jim Rouiller, lead meteorologist with the Energy Weather Group. Offshore platforms were retrofitted after 2005’s Hurricane Katrina to endure stronger storms, but onshore flooding could threaten the 45% of American fuel-making capacity that’s located along the Gulf Coast, as well as more than half the nation’s gas processing.

“The big issue is if it hits any of the refineries — present track is right over Lake Charles and 10% capacity at risk,” said Chuck Watson, a disaster modeler with Enki Research. “A wobble puts the north Texas coast in play.”

The city of Port Arthur will order some residents to flee the storm starting Tuesday, according to the Houston Chronicle.

“Although these terminals are built to withstand hurricane force winds, the storms will prevent any new vessels from approaching,” Daniel Myers, an analyst at Gelber & Associates, said in report Monday.

Western sugarcane in Louisiana between Lake Charles and Lafayette will be the most at risk from Laura, said Drew Lerner, president of World Weather Inc. in Overland Park, Kansas. Things would be worse if the storm veers more to the east.

For cotton crops, some parts of western Mississippi Delta area, central and interior parts of Arkansas also could be impacted, he said.

Kinder Morgan has suspended operations at International Marine Terminal in Port Sulphur, Louisiana, and reduced operations at Harvey Terminal in Harvey, Louisiana.Houston pilots are planning to halt inbound boardings from 4 p.m. local time in advance of Tropical Storm Marco, according to a bulletin obtained by Bloomberg.Chevron shut its Fourchon and Empire oil terminals in Louisiana, and has also shut Gulf of Mexico pipelines.Bunge has ceased operations at its grain-export facility in Destrehan, Louisiana, while Cargill has suspended operations at grain-exporting facilities in Westwego and Reserve, Louisiana.Noble Corp. is moving two offshore rigs, while BP Plc evacuated employees from four platforms.Energy Transfer LP shut in its Stingray Pipeline, which hauls gas from offshore fields to Louisiana.The Louisiana Offshore Oil Port, a major crude import hub, has suspended marine terminal operations.Royal Dutch Shell Plc evacuated employees and idled output at the majority of its Gulf operations.

Thirteen storms have now formed across the Atlantic this year, including five that hit the U.S. It is the fastest start to a hurricane season in records going back to 1851, said Phil Klotzbach, a storm researcher at Colorado State University.