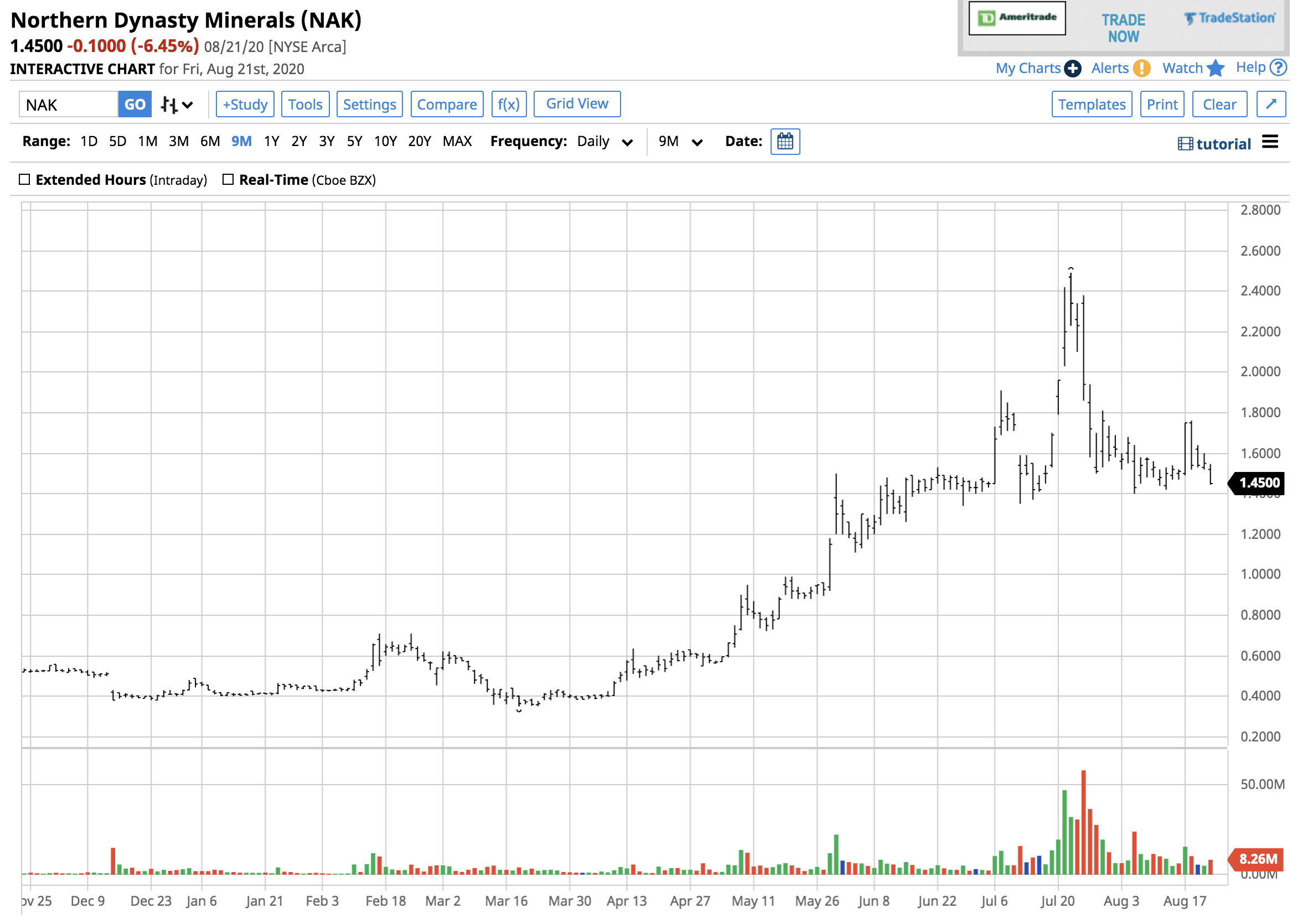 Northern Dynasty Minerals Is An Inexpensive Stock That Is A Political Bet – A Huge Decline On August 24 (NYSEMKT:NAK)

Northern Dynasty Minerals Limited (NAK) is a Canadian exploration company that has been in business since 1983. Exploring for minerals is a highly speculative venture. The risk of bankruptcy for companies like NAK is always high, but the reward is a function of risk. At $1.45 per share at the end of last week, many market participants consider NAK shares a lotto ticket. However, an emerging secular bull market in commodities improves the chances for success and would likely drive money into the stock.

Since March, NAK shares have rallied from 35 cents to $1.45 as they over quadrupled in value as of the end of last week. In late July, they traded as high as $2.49 per share. The company had a market cap of just under $728 million as of August 21. For those looking for commodity exposure with a high risk-reward profile, NAK could offer an opportunity. If 2020 turns out to be anything like 2008, and NAK has positive results from the company’s project in Alaska, the shares could experience explosive growth. However, politics in the US will determine the future path of least resistance for the shares. Former vice president Joe Biden, who leads in the polls, could destroy the prospects for the company even if the project yields economic mineral deposits. At the end of last week, there was growing doubt over if the Trump Administration would support the project. A long position in NAK is a bet on a conference call by the Army Corps of Engineers in Alaska, which will hold a press conference on Monday, August 24. The stock fell like a stone before any final decision on the final step in the permitting process.

A Canadian company with mining interests in Alaska

Northern Dynasty Minerals Limited (NAK)has its future in the hands of its Pebble copper-gold-molybdenum property in Alaska. The company has rights to 2,402 mineral claims covering an area of approximately 417 square miles in southwest Alaska. NAK is a Canadian company, so US politicians, regulators, and the Army Corps of Engineers have no vested interest in allowing the company to profit from the mining rights.

NAK has its headquarters in Vancouver, Canada, but its future lies within US borders in the mineral-rich state of Alaska.

It is not a bad time in history to be holding exposure to mineral rights where there are probable reserves of copper, gold, and even molybdenum. During the 2008 global financial crisis, central banks and governments addressed the debacle with unprecedented levels of liquidity and historically low short-term interest rates. Quantitative easing pushed rates lower further out along the yield curve to spur borrowing and spending and inhibit saving. The price tag for the 2008 crisis was high. The US Treasury borrowed a record $530 billion from July through September 2008 to fund the stimulus. Along with rising deficits, one of the consequences was that the liquidity triggered a secular bull market in commodity prices. Many raw materials rose to multiyear or all-time highs by 2011 as an aftereffect of the crisis.

The response to the 2020 global pandemic looks similar to the 2008 crisis when it comes to government actions to stem the financial impact. However, the levels of liquidity have been far higher than a dozen years ago. In May, the US Treasury borrowed $3 trillion to fund the stimulus so far. Once the US government gets its act together, more borrowing is likely on the horizon. We have already seen the beginning of the effects of the tidal wave of liquidity on many raw material prices. Last week, the price of lumber hit a new all-time at $830.90 per 1,000 board feet. The previous record peak came in May 2018 at $659. Crude oil recovered from its April low, where the price fell into negative territory for the first time in history. Nearby October NYMEX WTI futures were trading at over the $42 per barrel level on August 21. The prices of many other raw materials have moved appreciably higher since earlier this year when risk-off conditions on the back of the global pandemic gripped markets. The falling US dollar and flow of liquidity into the global financial system have created a potent bullish cocktail for many commodity prices. Shares of mining and exploration companies have rallied in anticipation of a continuation of bullish conditions in the asset class. 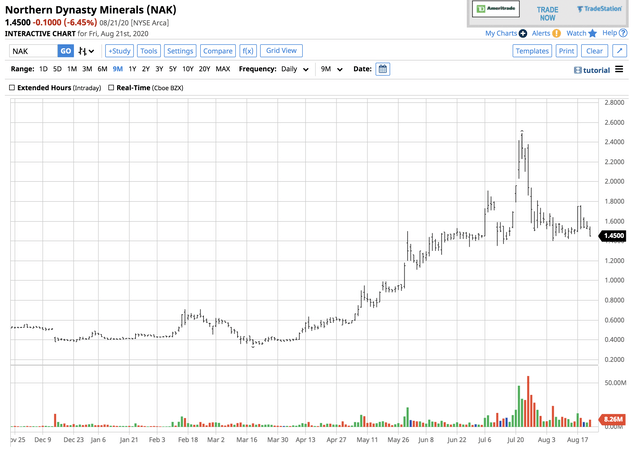 As the chart of NAK highlights, the Canadian exploration company with mining interests in Alaska rose from a risk-off low of 35 cents per share on March 18, 2020, to a high of $2.49 on July 22, 2020. The stock moved over seven times higher in a little over four months as the market became excited over the prospects for the Alaskan Pebble project.

Bullish price action in two of the three metals

Gold and copper have experienced exciting gains since the risk-off period in March of this year. Gold futures on COMEX corrected to a low of $1450.90 per ounce in mid-March. Over recent weeks, the yellow metal reached a new all-time high. 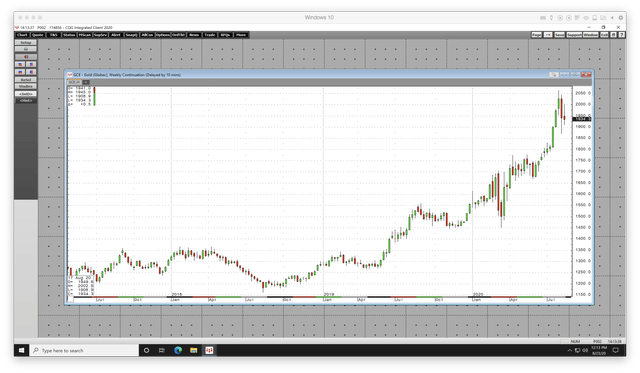 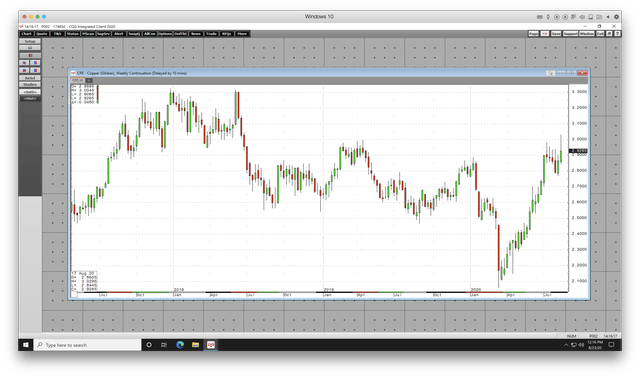 Meanwhile, copper futures on COMEX fell to a low of $2.0595 in mid-March, the lowest price since June 2016. The price recovered to over the $2.90 level at the end of last week and traded above $3 per pound for the first time since June 2018. At the recent high, copper had appreciated by over 47% since March. the ascent of gold and silver has sent many mining and exploration stocks soaring, and NAK was no exception.

When it comes to molybdenum, a minor metal that is a critical component in steel alloys to increase strength, hardness, electrical conductivity, and resistance to corrosion and wear, the price action has not been bullish over the past months. Molybdenum has the sixth-highest melting point of any element, which provides for a myriad of industrial applications. 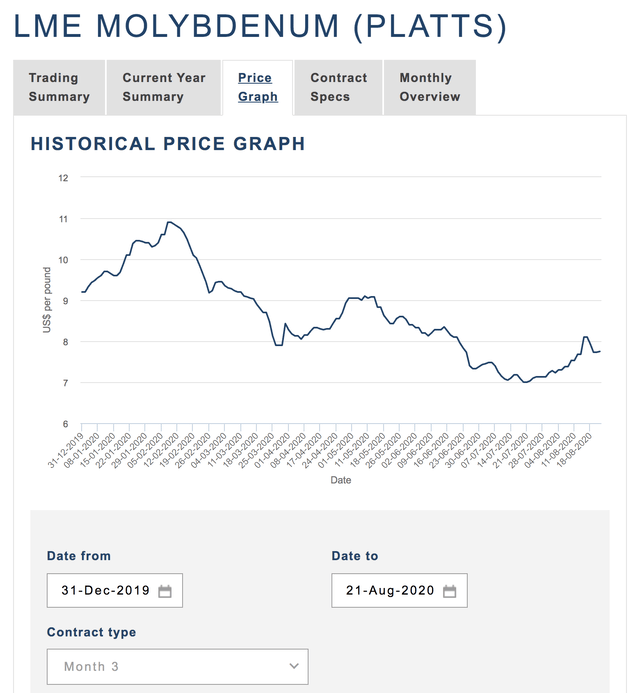 Meanwhile, in the aftermath of the 2008 financial crisis, the price of molybdenum fell to a low of $9.64 per pound. In 2011, it reached a high of around $20. Two of the three metals in NAK’s Pebble project appreciated dramatically since March, The prospects for all three remain bullish if the years following 2020 turn out to be anything like the periods from 2008 through 2011.

NAK is a highly speculative stock, like most exploration companies. 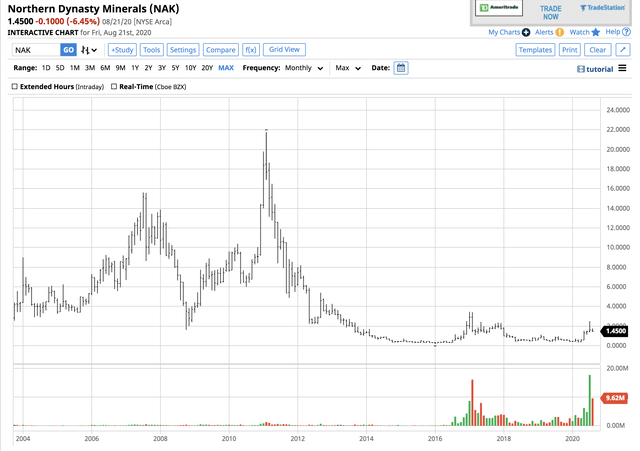 As the chart shows, the secular bull market in commodities from 2008 through 2011 lifted the price of NAK shares from $1.60 to a high of $21.76 over the period. Since the 2011 peak, the company has struggled, reaching a low of 35 cents per share in March. However, optimism over the Pebble project and memories of the move to almost $22 per share in 2011 caused some speculators to flock to NAK over the past months.

On Monday, August 24, the US Army Corps of Engineers will hold a press conference that could determine the path of least resistance for NAK shares. The stock closed at $1.45 on August 21, in the middle of its trading range since the March low and July high. Environmentalists have warned that the project would threaten the world’s largest sockeye salmon fishery. President Trump is facing pressure to nix the project from various interests, and it does not help that NAK is a Canadian company.

While President Trump has been a pro-mining advocate, there is no political capital in approving a project that benefits a Canadian company. The gold-copper-molybdenum project could produce an average of 70 million tons of the three metals annually over twenty years, worth hundreds of billions of dollars and tax revenues. In July, the Army Corps of Engineers determined that the Pebble Mine “would not be expected to have a measurable effect on fish numbers and result in long-term changes to the health of the commercial fisheries in Bristol Bay.” The Politico news item expects the Corps to say that outstanding technical issues with a key permit remain, leading the way for the administration to publicly oppose the project. However, the Alaska Republican Party passed a resolution “in support of the responsible development of the Pebble Mine.” On August 22, NAK said that the Politico report was fake news.

Meanwhile, the President’s challenger, former vice president Joe Biden, has vowed to block the Pebble mine project if elected on November 3. He said, “It is no place for a mine. The Obama-Biden Administration reached that conclusion when we ran a rigorous, science-based process in 2014, and it is still true today.”

The Pebble project is a political hot potato. With environmental concerns on one side and the potential for significant tax revenues on the other, the fate of NAK shares hangs in the balance. We saw a substantial move to the downside in the stock on August 24. 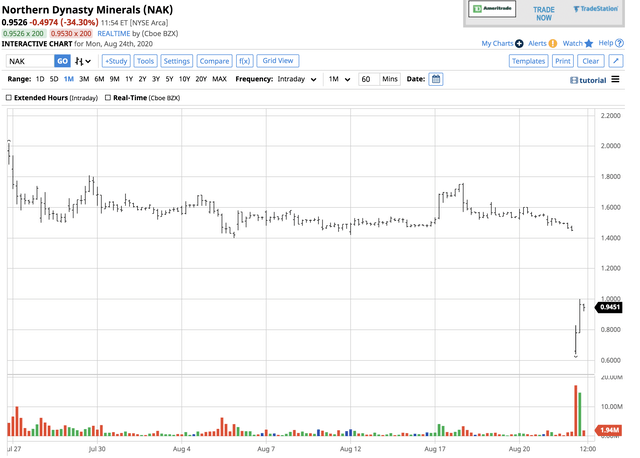 The stock gapped down on August 24, opened at 66 cents per share, traded to a low of 64 cents, and was trading at the 95 cents per share level before noon. Over forty-million shares traded by noon. A number of high profile Republicans were urging President Trump to “put his thumb on the scale when it comes to the final step of permitting at Pebble,” according to NAK’s CEO. The company has one asset, which is its rights at Pebble in Alaska. The timing of the fall to below $1 per share coincides with the beginning of the Republican convention. The market is telling us that the Trump administration will side with environmentalists, but the jury is still out when it comes to a final decision. On Monday, the Army Corps of Engineers made a demand that the company provides a mitigation plan to “avoid adverse impacts” of the project.

NAK has a lot riding on the decision. NAK has attracted lots of speculation over the past months, causing lots of volatility in the stock. The average daily share volume was over ten million last week, but four times that level traded in the first hours of trading on August 24. Exploration companies are highly volatile. Politics and not economics will determine the path of the stock. I am neutral on NAK shares because of the uncertainty of the decision. However, at below a buck on August 4, the downside is limited to the stock price, but the upside could be far greater than the risk if the Pebble project goes forward. Politics will determine if NAK experiences another recovery.

The Hecht Commodity Report is one of the most comprehensive commodities reports available today from the #2 ranked author in both commodities and precious metals. My weekly report covers the market movements of 20 different commodities and provides bullish, bearish and neutral calls; directional trading recommendations, and actionable ideas for traders. I just reworked the report to make it very actionable!

Additional disclosure: The author always has positions in commodities markets in futures, options, ETF/ETN products, and commodity equities. These long and short positions tend to change on an intraday basis.

Editor’s Note: This article covers one or more microcap stocks. Please be aware of the risks associated with these stocks.

2020-08-24
Previous Post: Notre Dame Fans, Do Not Miss This Opportunity!
Next Post: J. C. Penney retirees worry about losing income due to the retailer’s bankruptcy