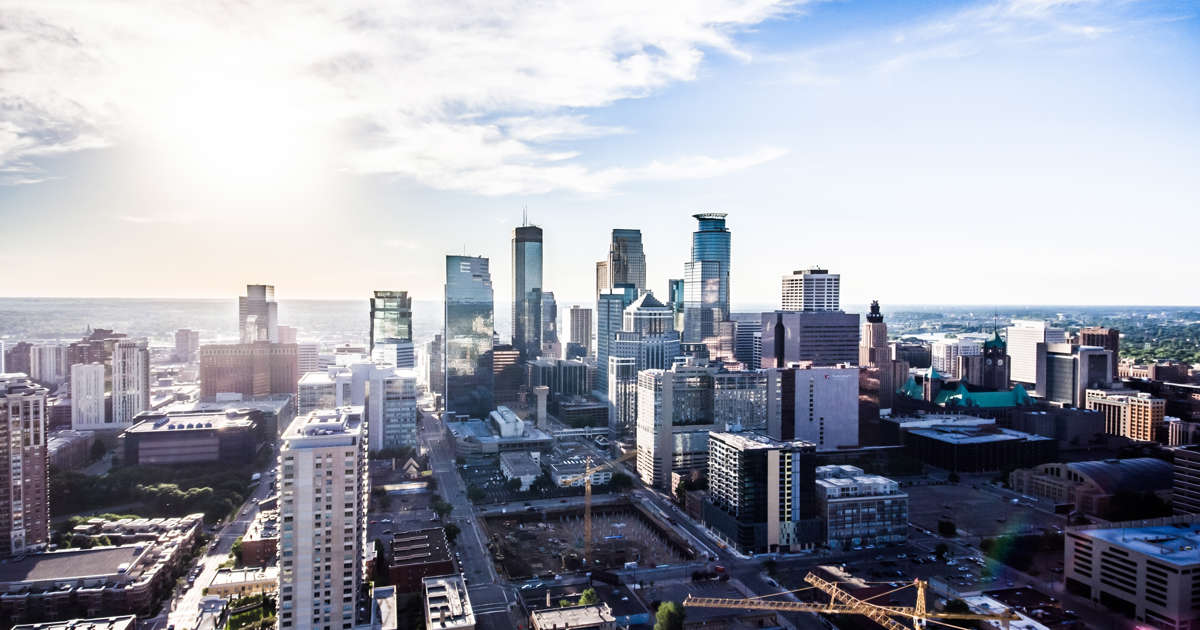 Minneapolis business owners want to protect their windows after riots. But there’s a problem.

After looters crashed through his floor-to-ceiling windows and stole $1 million worth of booze in May, Chicago-Lake Liquors owner John Wolf wanted to protect himself from a repeat occurrence.

Like property owners throughout the world, he wanted to install security shutters on the outside of his building. The investment would not only prevent rioters from entering his store, it would protect his windows — which cost $50,000 to replace.

But Wolf ran into a big obstacle: The City of Minneapolis has barred security shutters on building exteriors since 2004.

Unlike the City of St. Paul, which allows external shutters as long as owners request a permit, Minneapolis limits security shutters to the inside of a property, leaving windows vulnerable to attack. In a report justifying the rule change, Minneapolis officials argued that external shutters “cause visual blight” and create the impression that an area is “unsafe” and “troublesome.”

But in the wake of the riots, when police failed to prevent widespread looting and damage to more than 1,500 businesses in the Twin Cities, property owners say they can no longer count on the city to protect their property.

“Times have changed,” Wolf said. “I am going to spend millions of dollars to bring my business back, and I don’t want to buy 20 window panes and have them broken the first day. Property owners should have options on how to protect themselves.”

Wolf is one of many small business owners who have taken a sudden interest in security. At QMI, an Illinois company that bills itself as the largest provider of security shutters in the U.S., orders have doubled since this spring, when riots broke out across the country in response to the death of George Floyd in Minneapolis.

Tom Miller, QMI’s vice president of marketing, said the company is hearing from restaurants and mom-and-pop stores that never expressed an interest in shutters before.

“It’s nationwide, and it’s impacting the whole industry,” Miller said. “We have more business than we can handle.”

Miller said Minneapolis is one of the few big cities that ban external shutters, noting the shutters are widespread in Europe and many major American cities, including New York. “It is usually the landlord that restricts their use rather than the cities,” Miller said.

Minneapolis City Council Vice President Andrea Jenkins, who represents many of the businesses that were destroyed in the riots, said any property owner who wants external shutters can seek a variance from the city. She said the city would show “flexibility” regarding the rule.

“In general, I think people should be able to protect their property,” Jenkins said.

Since Minneapolis put the rule into effect 16 years ago, just one business owner has sought permission for external shutters, city records show. The property owner said he needed the shutters to protect his retail shop, which had been burglarized several times after criminals broke in through the windows. The request was denied.

“While someone is authorized to file a variance, it is challenging to meet the legal findings that are necessary to grant a variance from this type of provision,” said Sarah McKenzie, a spokeswoman for the city.

Quality Coaches owner Mark Brandow, who wants to install shutters on his car repair shop on West 38th Street, said Minneapolis officials told him his property wasn’t “eligible” for a variance when he tried to file the paperwork in July.

McKenzie acknowledged the “miscommunication” in an e-mailed response to questions, noting that such requests are “extremely rare.”

“We apologize for the error,” McKenzie said.

Brandow said he is glad city officials will now let him to make his case, because he was prepared to install a set of interior shutters for about $25,000. Brandow said he wants the protection even though his business wasn’t damaged in the riots. Brandow said he is concerned that another round of rioting could break out if one of the police officers charged in Floyd’s death is acquitted.

“I have never felt so vulnerable,” said Brandow, whose shop is located two blocks from another car repair business that was destroyed in the May riots.

Brandow has been fixing imported sports cars and other vehicles in south Minneapolis since 1975. Though his shop was burglarized once, about 10 years ago, Brandow said he didn’t consider barricading his windows until this year. Now in his 70s, Brandow said he needs to protect his business, valued at $860,000, because he can’t afford to rebuild and won’t be able to retire if his shop is wrecked.

In 1992, Brandow received an award for rehabilitating a historic building from the American Institute of Architects. But the property now looks like an “orphanage in distress,” he said, because he has not removed the plywood he used to protect his windows during the riots as a protest to the city’s stance on shutters. The boards are covered with graffiti.

“People in the neighborhood have asked me to take the boards off, because it is ugly,” Brandow said. “But I don’t need to be pretty. I’m going to leave it ugly until I get some satisfaction.”

Some business owners said they can’t wait for the city to act on a variance request, so they have moved ahead with other forms of protection. Last week, Wolf traveled to Broadway Liquor Outlet in north Minneapolis to inspect a new system installed by store owner Dean Rose, who spent $12,000 for metal gates that sit inside his giant windows.

Though the gates won’t protect the glass, they are designed to keep intruders out, Rose said.

Wolf was not impressed. “How long would it take to get through here? Two minutes?” he asked, as general manager Travis Smith showed him around the store.

Smith agreed that anyone with bolt cutters could probably make short work of the barricade, but he said it was the best the store could do.

“I didn’t have much choice,” said Rose, who reopened his store in July. “I know there is an ordinance against shutters, and I couldn’t wait.”

Rose, who estimates he lost more than $500,000 when his store was looted during the riots this year, said he spent about $30,000 to replace his 14 window panels. He said he is preparing to petition the city for a rule change that would allow many business owners to install external shutters.

“I think there is a way you can make an aesthetically pleasing security barrier that doesn’t give a derogatory impression to somebody,” Rose said. “The reality is, certain businesses needed to be protected because they are hot spots that people go to loot because of what’s inside.”

Jenkins said she is willing to consider changing the rule at the City Council.

“New York has metal shutters that come down at night, and it really does look like a fortress, — so I think there were some valid reasons for instituting that ordinance,” Jenkins said. “But everything is subject to change. So I would be open to looking at it given the new realities we are in.”