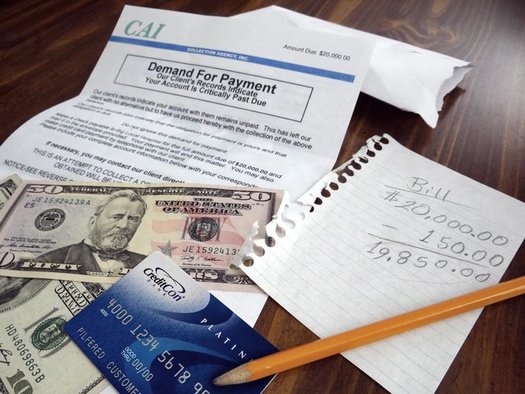 The economic crash during the pandemic means the bills are piling up for millions of Pennsylvanians.(Dodgerton Skillhause/Morguefile)

Pennsylvania and New Hampshire are the only states in the Northeast that don’t have a state earned income tax credit to piggyback off of the federal Earned Income Tax Credit, which has helped lift millions out of poverty.

State Sen. Art Haywood, D-Philadelphia, said it would put an extra $500 to $700 a year into people’s pockets and boost the economy at the same time.

“Health-care workers, food service workers, grocery store workers who will use this money for food, for rent, for automobiles, for utilities,” Haywood said. “This tax credit is money that will go straight into our local businesses that are also suffering.”

A new policy paper from the Pennsylvania Budget and Policy Center found the tax credit would cost the state between $400 million and $600 million a year.

Opponents noted the state currently has a multi-billion-dollar shortfall.

State Rep. Sara Innamorato, D-Lawrenceville, said the money could be raised via a “Fair Share” proposal that would raise taxes on wealthy people and corporations.

“This crisis is an opportunity to modernize our state tax system that has historically served the rich,” Innamorato said. “We as state lawmakers can design a tax code that bolsters our local economies and curbs skyrocketing inequality.”

More than 2 million people in the Keystone State have filed for unemployment in the wake of the pandemic.

Diana Polson, senior policy analyst for the Pennsylvania Budget and Policy Center, said this kind of direct aid to low-income families can make a huge difference.

“Having this income can be the difference between affording a car payment,” Polson explained. “Which allows you to continue working and going to the grocery store, or putting a security deposit on an apartment.”

Disclosure: Keystone Research Center, Inc. contributes to our fund for reporting on Budget Policy & Priorities, and Livable Wages/Working Families. If you would like to help support news in the public interest, click here.