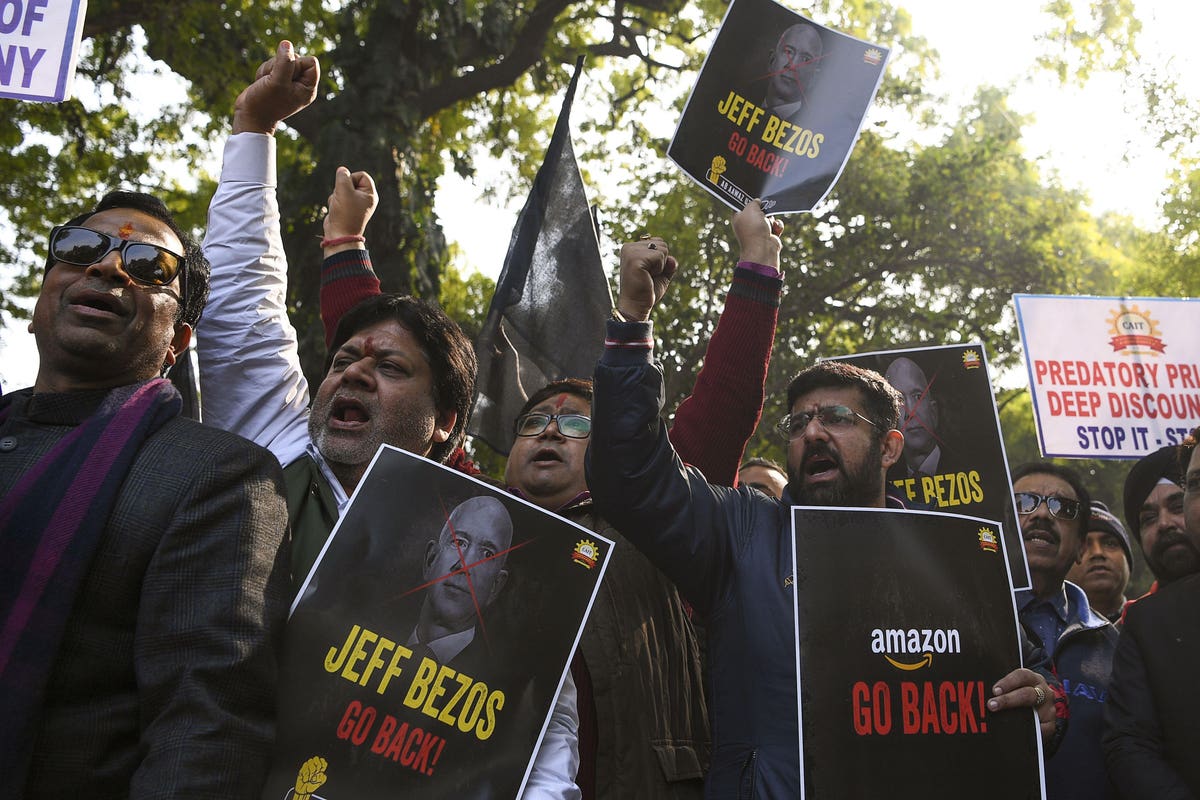 An Indian trade group representing online vendors has filed an antitrust case against Amazon in the country—which follows other antitrust cases or expected probes against the retail behemoth in Canada, Europe and the United States, from both the federal and various states—alleging that the e-commerce giant offers preferential treatment to some retailers and brands whose steep discounts are driving independent retailers out of business.

The case, first reported by Reuters and later confirmed by Forbes, has been filed by the All India Online Vendors Association with the Competition Commission of India (CCI).

The group has alleged that Amazon uses its wholesale unit to buy goods in large quantities from manufacturers and then sells them at a loss to vendors such as Cloudtail India and Appario, who then offer the items at big discounts.

Both Cloudtail India and Appario are partially owned by Amazon as India’s foreign investment laws prevent the company from directly selling to customers in the country, which forces Amazon India to operate as a marketplace.

Forbes learned that the group has also expressed concerns about Amazon’s use of its own private label brands like Solimo and Presto to undercut sellers on the platform.

Chanakya Basa, a lawyer representing the trade group told Forbes that an antitrust case against Amazon has been filed with the CCI, but refused to divulge any details.

The CCI will review the case in the coming weeks and then decide if it wants to launch a wider probe into the issue or dismiss it.

India’s new e-commerce policy draft may force companies like Amazon to offer the country’s government access to their source codes and algorithms, to prevent “digitally induced biases” by competitors, Bloomberg had reported last month, citing a leaked copy of the report. Local e-commerce startups have repeatedly sought help from the government to tackle global giants like Amazon and Walmart which dominate the sector.

Earlier this year, the CCI had ordered an investigation into alleged antitrust violations by Amazon and Flipkart. The investigation, however, was put on hold by the Karnataka state High Court after Amazon argued that the CCI lacked sufficient evidence to order such an investigation. In January, Amazon CEO Jeff Bezos had made a high profile visit to India, where he promised $1 billion in investments in the country. Unlike other major U.S. business leaders, Bezos received a cold shoulder from New Delhi, with the trade minister Piyush Goyal dismissing the proposed investment as “not a great favour” for India. A senior leader of India’s ruling Bharatiya Janata Party also targeted Bezos’ ownership of the Washington Post, for coverage that has been critical of the country’s Prime Minister Narendra Modi and his government. Outside India, Amazon’s dual role as both a retailer and a marketplace for third-party sellers has led to run-ins with regulators. The company has been accused of influencing search results on its site and using third party sellers’ data to directly compete with them. Earlier this month, Canada’s Competition Bureau launched an investigation into whether Amazon’s conduct on its marketplace has hurt consumers and companies in the country, CNBC reported. In June, the Wall Street Journal reported that the European Union may initiate formal antitrust charges against Amazon due to its treatment of third-party sellers. Prior to that in April, U.S. lawmakers asked the company to clarify if it had lied to Congress about the methods it uses against its competitors on its platform, accusing the company of using data generated by third-party sellers to develop competing products. Last year, the company’s Associate General Counsel Nathan Sutton testified before the House Judiciary’s subcommittee on antitrust stating that Amazon does not “use individual seller data to directly compete with them.”